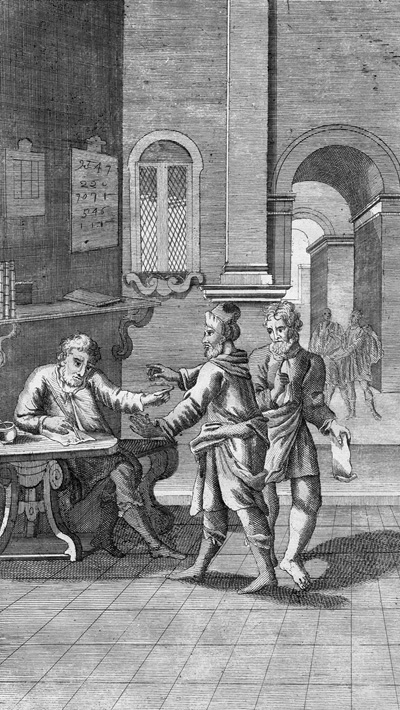 Jesus says, “And I say to you, make friends for yourselves by unrighteous mammon, that when you fail, they may receive you into an everlasting home.” When you fail. Jesus says this to “you,” meaning, His disciples, meaning, us. We concluded in our last meditation that

If we take it as axiomatic that it’s not a question of if, but when we fail, this leads to the next conundrum, how is it that we, like the steward, react to our accounting by directing our thoughts to the debtors?

And Jesus is pretty clear. “Make friends” equals go find the debtors. Just as the steward hunted down the debtors to ease their debt, so should we “make friends” with some parallel to the debtors. Why? So that “they may receive you into an everlasting home.”

So, who are the parallels to the debtors in the heavenly realm – parables are earthly stories with heavenly meaning – who can receive us into our everlasting home. That seems to be the biggest conundrum in the text.

Let’s begin by stipulating the obvious and absolute: Jesus is our final judge. So, somehow we have to bridge the gap between Jesus our final judge and the debtors in the text. There are five possible texts that can bridge this gap. Let’s look at them.

The first texts come from Proverbs. “He who oppresses the poor reproaches his Maker, But he who honors Him has mercy on the needy.” And again, “He who mocks the poor reproaches his Maker; He who is glad at calamity will not go unpunished.” Here, we see a connection between our Maker – who by implication is our judge – and the poor, or the indebted ones. If we oppress the poor, we will have to answer to our Lord. By implication, if we befriend the poor, the Lord will commend us.

The second text comes from the Sermon on the Mount: “Therefore if you bring your gift to the altar, and there remember that your brother has something against you, leave your gift there before the altar, and go your way. First be reconciled to your brother, and then come and offer your gift. Agree with your adversary quickly, while you are on the way with him, lest your adversary deliver you to the judge, the judge hand you over to the officer, and you be thrown into prison. Assuredly, I say to you, you will by no means get out of there till you have paid the last penny.”

This verse somewhat parallels Jesus’ “make friends” with those who have the power to judge you. Here, clearly, the brother with whom we’re not reconciled has the power to hand us over to the officer, who can put us in prison. In a bit of a stretch, the brother that has something against us is like the debtors who have been overcharged and oppressed. On the last day they will have their recompense, and woe betide those who are in the cross hairs of that recompense.

The third text is “Assuredly I say to you, that in the regeneration, when the Son of Man sits on the throne of His glory, you who have followed Me will also sit on twelve thrones, judging the twelve tribes of Israel. And everyone who has left houses or brothers or sisters or father or mother or wife or children or lands, for My name’s sake, shall receive a hundredfold, and inherit eternal life. But many who are first will be last, and the last first.”

So, the “indebted one” is the one Jesus sends out. To receive that one is to receive Jesus, and at the judgment, they will testify how others treated them.

The fourth text follows from this one. It’s the parable of the sheep and the goats, in which Jesus says, “Whatever you have done to the least of these my brethren, you’ve done it unto Me.” Which brethren? Those who are without food, drink, clothing; who are weak and imprisoned. That is, the apostles, those sent out. As in Matthew 10, they are sent out indebted to others. Yet, those that provide for them are providing for Jesus, and He will judge them on that basis.

If these texts provide some guidance on understanding who the debtors are in the parable, we get a range of possibilities. It could be the poor in general. It could be all Christians. It could be apostles and ministers.

Yet, we run into a problem. If the rich man is God, which he likely is, then how are the poor, Christians, and ministers indebted to God? All people are indebted to God – forgive us our debts, we pray.

Of course, Christ took on our debts. He became a debtor. And he has the power to judge us.

And Christ bids us to take up our cross and follow Him, so we share with Him His debt-bearing, so to speak. We struggle under the burdens of the Gospel. We struggle with sin. We confess sin. We are mocked for the Gospel, and many are killed. We become the poor.

And yet, we will judge the earth.

The key point, it seems, of the steward – whoever he is – is that when faced with his day of accounting, he switches gears in his thinking. The prodigal son had a similar switch in gears when he “came to himself” after wasting his goods. The steward went from thinking about enriching himself to befriending debtors. If debtors are Christ first and His followers, this would suggest the steward went from the “all about me” team to the “debtor” team, Christians. He’s living with them now!

If calculation seems cold and too “tit for tat,” Jesus seems to say, so be it. Sometimes being a Christian is about saving your own hide. Indeed, isn’t Christianity about this for all of us? Befriend those who on judgment day will be sitting on thrones. Who is that? It’s the person sitting in the pew next to you.