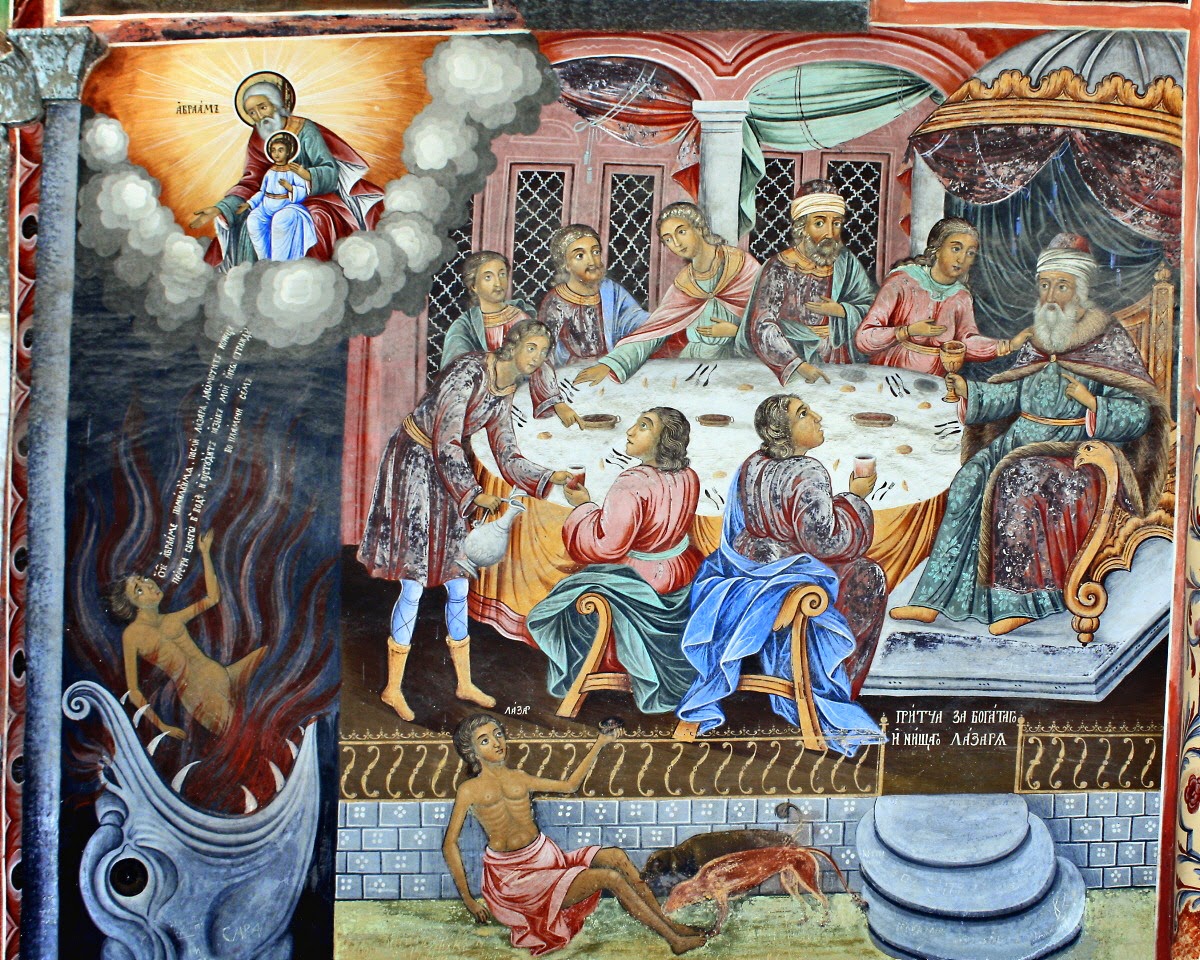 One of the most beautiful and powerful details about this Gospel is a simple but hidden one. Lazarus is named, but the rich man is not. This means that the name Lazarus has rung forth in the Church for 2,000 years, but every time the phrase “rich man” is uttered, the Church is reminded that his riches were temporary, and he himself is in hell.

As the Psalm says, “Certainly every man at his best state is but vapor. Surely every man walks about like a shadow; Surely they busy themselves in vain; He heaps up riches, And does not know who will gather them.” Or again from another Psalm, “As for man, his days are like grass; As a flower of the field, so he flourishes. For the wind passes over it, and it is gone, And its place remembers it no more.”

But for Lazarus another set of verses is appropriate: “If you confess me before men, I will confess you before my heavenly Father.” And, “He who overcomes shall be clothed in white garments, and I will not blot out his name from the Book of Life; but I will confess his name before My Father and before His angels.”

Couple these verses with what we’ve been meditating on for the past weeks, and we get something profound. We’ve been meditating how worship is heaven on earth, how the Holy Spirit fills our faith with a palpable vision of our existential reality at God’s right hand, through the earthly testimonies of water and blood, the sacraments. Worship is indeed heaven on earth. So to say, “If you confess me before men, I’ll confess you before my heavenly Father,” is to “witness” all this in the divine service. Surely we confess the Lord’s name publicly before men, in the Creed. But are our names confessed before the Heavenly Father by Jesus in the divine service?

Well, we know Lazarus’ name is confessed, every time his Gospel comes up in the text. So also the Canaanite woman. But when is the one day each of our names is confessed before the Father, or when our names from the Book of Life are read? At least at Holy Baptism. But consider also the prayer of the Church, where the individual names of the saints are laid before the throne of God. Throughout our lives, our names are part of the liturgy.

The book of Numbers is often mocked for being the “begot” book of the Bible, with list after list of the people of Israel, so and so begetting so and so, and so on and so on. But imagine if your family name was among those names. Your family name is part of the Torah, read in the Hebrew temple in the presence of God. Surely that is a book of life, to have your name brought to the Lord’s remembrance. And that’s what it is, causing your name to not be forgotten, but remembered.

Now, let’s look at Lazarus’ name, because this is interesting as wel.

Which is to say, the Lord builds His people into the names He gives them. He did this with Abraham, for instance. God gave Abraham his name, which means “Father of many,” when he was the father of none. And even at his death, he was the father of one. Yet, Abraham has had as many children as the stars of the sky, children of God born from above. God built Abraham into the name he gave him.

Same also with Peter. Peter was originally Simon, but Jesus gave him the name “Peter,” meaning “rock.” Yet, Peter was not very rock-like when a little girl’s query caused him to deny Jesus three times. Still, Peter went on to become a rock of the Church, as his Pentecostal sermon proved to be.

What name has been given us? What name is the Lord building us into?

That name is His own name, the name of the Father and of the Son and of the Holy Spirit. This is the name put on our foreheads. It’s the name we inherit in Christ. It’s the name the Lord cannot deny, for He cannot deny His own name. As the Lord says in Isaiah, “Everyone who is called by My name, Whom I have created for My glory; I have formed him, yes, I have made him.” (The prophets are loaded with that theme, that the Lord acts for “His names’ sake” as in “Then you shall know that I am the LORD, when I have dealt with you for My name’s sake, not according to your wicked ways nor according to your corrupt doings, O house of Israel,” says the Lord GOD.’ ”)

This is the name into which we have been born, the name into which we grow, and the name the Lord will bring to fruition. But our individual names are part of this equation, insofar as our names are wrapped in the divine name of God: “So and So, I baptize you in the name of the Father and of the Son and of the Holy Spirit.” In this sense, Lazarus is a stand in for all of us, for all of us are “ones whom God has helped.”

But the critical thing to keep in mind, is that the promise is for the world to come. This side of heaven may bring nothing but suffering, and the dogs. It’s a tough truth, but a very real truth for many, many people.