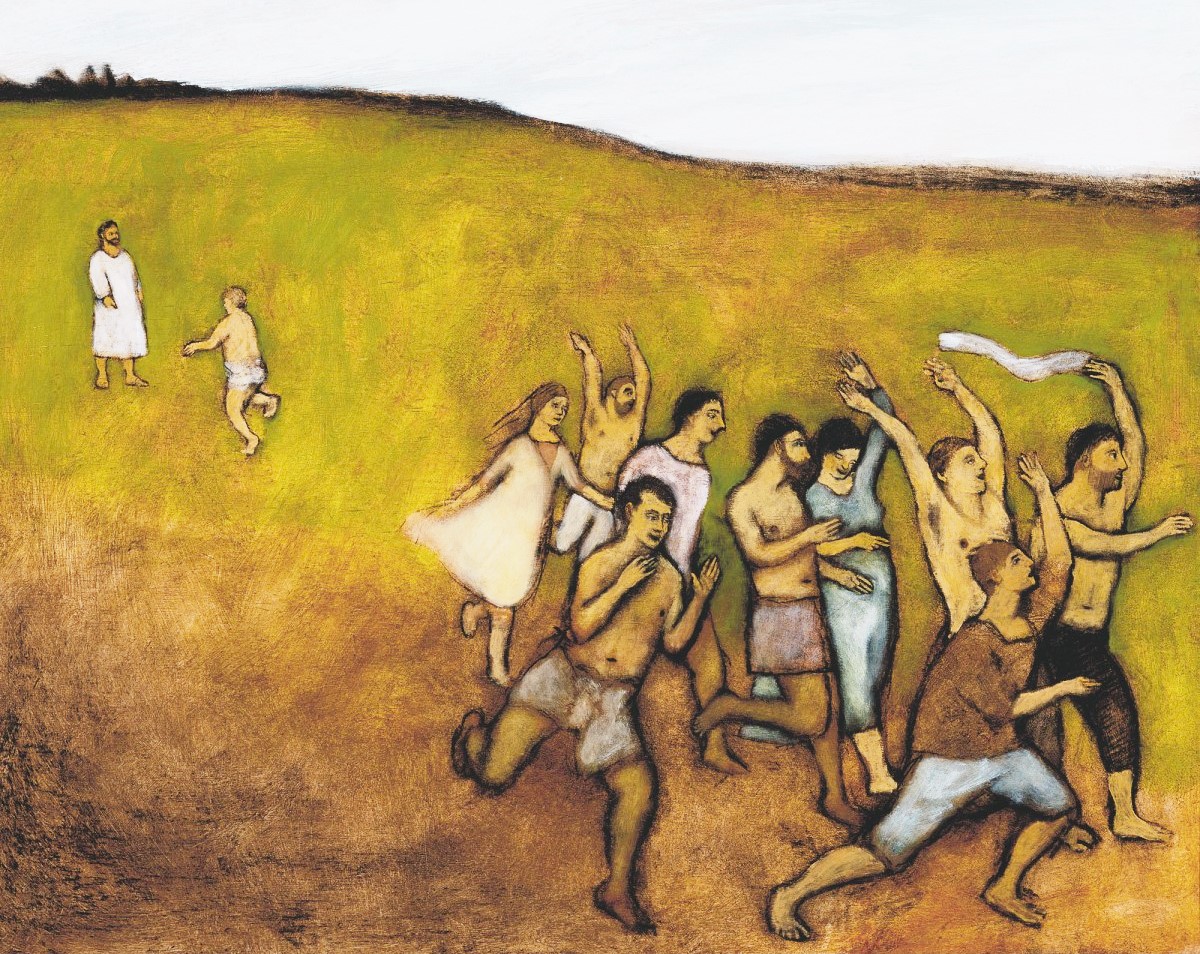 The account begins with lepers standing “afar off.” They stood afar off because that’s where the Law placed them. They were unclean, and to have contact with them would make you unclean. Therefore they stood separate from others.

And this isn’t some unenlightened aspect of God reigning in the Old Testament, along with the rules about handling corpses (as we saw last week). Rather, it’s a statement about the fall. God hates the fall and all its consequences. The fall results in death. God is a God of life, not death. That which He gives life, which is now returning to death because of rebellion, He has nothing to do with.

And in fact, the Old Testament provided the means by which the unclean might become clean, or how the sinner might become forgiven. The Old Testament was ultimately merciful. But as St. Paul spoke of it, it was a “pedagogue,” leading us to new ways. It was the training wheels.

Again, why contemporary “worship leaders” would edit this beautiful witness out of the church’s worship eludes us. The historic liturgy has it in three parts of the worship – the Kyrie, the Gloria in Excelsis, and the Agnus Dei – meanwhile, a typical contemporary worship service won’t have it at all. Not only do they remove the formal prayer, but they remove what it symbolizes as an article of our faith. The one praying “Lord, have mercy on me, a sinner” goes home justified. The one posturing himself at the zero point is the one lifted up. In contemporary worship there’s usually no humbling to speak of, no actions of humiliation, no words of humiliation. Not so the lepers.

Jesus sends the lepers to the priest. Why? Because that’s where lepers were to go, according to the Law, in order to be declared clean. One wonders why the lepers did as Jesus instructed. They could have gone to the priest any time. Why now? Why when Jesus told them to? They must have suspected there might be a healing on the way there. And in fact, because the priests were the ones who declared them clean, it was sort of like Jesus sending them with a wink. It would be like someone begging God for more money, and God says, “Why don’t you go check out your bank account.” And of course, they were healed on the way.

Now things get interesting. Jesus had commanded them to go to the priest. The nine lepers were obeying Jesus. And in fact, the priests would be the ones to declare them clean.

Because who is the true priest? And what is the true declaration of cleanliness? Well, here’s where we get another example of old wineskins not able to contain new wine. Yes, the nine lepers going to the priest for him to declare them clean was strict obedience to the law and in fact to Jesus Himself. But faith recognizes something greater. It recognizes Jesus as the focal point of God’s mercy on earth. It also, even if unwittingly, recognizes Jesus as the true priest, with true power, and true ability to declare a true cleansing.

The non-unwitting response of the leper is in fact the recognition of the greatest mystery, that Jesus is God in human flesh. Look at the language, “And one of them, when he saw that he was healed, returned, and with a loud voice glorified God, and fell down on his face at His feet, giving Him thanks.”

Notice, he glorified God, and then worshiped Jesus and gave Him thanks. To glorify God is to worship Jesus. And this mystery trumped even obedience to Jesus, Who Himself was simply mouthing Old Testament Law. Here’s a perfect example of Jesus fulfilling and moving beyond the Law. He Himself administers the Law; but He also reveals something greater at hand.

The unwitting response of the leper is that in fact Jesus was the priest he needed to go see. For as Hebrews tells us, “We have such a High Priest, who is seated at the right hand of the throne of the Majesty in the heavens, a Minister of the sanctuary and of the true tabernacle which the Lord erected, and not man.”

And the second unwitting response of the leper is that Jesus’ declaration of cleanliness is actually the true cleansing he needed. “Arise, go your way. Your faith has made you well.” Jesus declares him well, by faith.

Now, if we understand “made well” simply as “healed of leprosy,” then what made the other lepers well? Did they too have faith? Or just obedience to the Law? Clearly Jesus is singling out the Samaritan’s faith as something above and beyond that of the others. Which stands to reason that he got a “wellness” above and beyond that of the others. What healing did he get beyond being healed of leprosy, which all ten got?

We suspect it’s eternal salvation, because, well, that’s what the Gospel is all about. It’s also what results when someone comes in faith to Christ and recognizes in Him the merciful work of God on earth, that is, the Holy Trinity. Although Jesus doesn’t specifically say what the wellness He gave entailed, it’s safe to assume this is what He meant.

So, let’s look at the pattern:

Pray the Lord for mercy. Get healed. Worship Jesus as God in flesh. Glorify God. Anyone see the pattern there? They should, because it’s the same pattern as the liturgy, at least the first third of it. Kyrie, absolution, Gloria in Excelsis. There’s also a creedal element in the leper’s actions, insofar as he recognized in Jesus the work of God.

Whereas in last week’s Gospel, the Samaritan was the merciful one, this week, the Samaritan is the one who is dealt with mercifully. In both week’s the theme is similar. There’s a new dynamic at hand that’s lifting things out of the Old Testament arena with its laws. Mercy is fulfilling the Law and bringing it to completion.

Yet, there’s also a subtle teaching going on in this week’s Gospel that we shouldn’t forget. Yes, there was a truer healing the Samaritan was experiencing. Yes, Jesus is the true high priest. Yes, the nine should have returned and recognized Jesus is God in flesh, and gave Him thanks. But they simply did not have the faith that the Samaritan had. Yet. (Let’s be optimistic!)

Did that mean the Lord reversed their healing? Did He undo His work of grace? Due to their lack of faith, did He take away their healing? Of course not. Why? Because the Lord is good. He is good to those who are not faithful to Him. He causes the sun to shine on the good and evil alike. He gave out a goodness and a mercy today that was reacted to at two different levels, all of it good, some of it way better.

The “way better” goodness and mercy was at the level of faith. May we all have such faith, a faith resulting in glory of the Triune God, and so have the true healing.