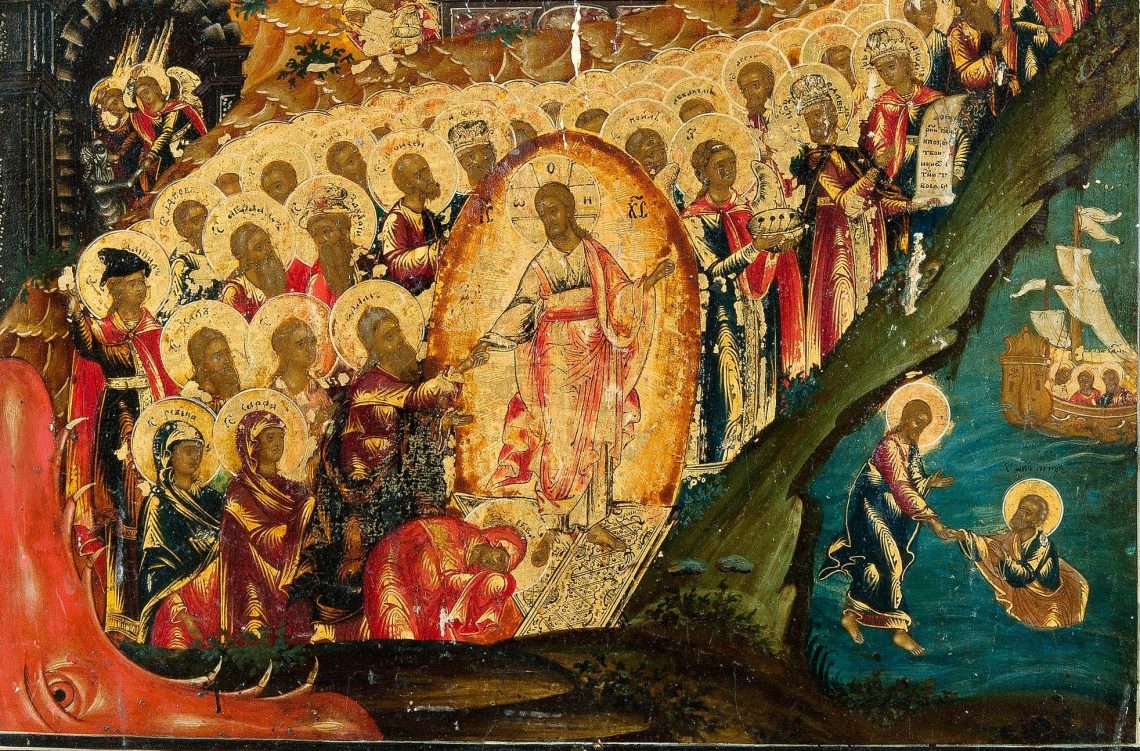 When He had been baptized, Jesus came up immediately from the water; and behold, the heavens were opened to Him, and He saw the Spirit of God descending like a dove and alighting upon Him.

Christ’s baptism is arguably the beginning of the new creation. It’s when God submerged the old world in the waters, just as He did in the flood, and caused to emerge from one person a new people.

The dove isn’t a random illusion. The dove alighted first on the ark. Jesus in His baptism is the ark, which is also why in the apocalyptic literature a rainbow is over Christ’s throne. Arks are there to save people from watery death, that is, judgment. There will never be a flood again, but there will be judgment again, so a new ark saving from a new judgment will not be wooden, but fleshly, or bodily, and a new dove, the Holy Spirit coming down bodily, will alight on the new ark.

And the way we enter the ark won’t be through an open wooden door, but through…well, “the heavens were opened to him.”

But as we also see in the flood, heaven opened means rain. Still, as a Psalm says, “In the light of the king’s face is life, And his favor is like a cloud of the latter rain.” With the opening up of heaven we hear the Heavenly Father speak words – it’s easier to hear the words of someone in the other room when the door is opened. Those words raining down from heaven are the doorway into the ark that is Jesus. Within the declaration “this is My beloved Son with whom I am well pleased” is where we want to be – being pleased by the Father goes hand in hand with heaven opened. Those in the water with Jesus shared those words and that favor, and Jesus later in His ministry would teach the Fatherhood of God for His disciples – baptism is where that begins.

Not water alone, but water combined with God’s word.

At Jesus’ birth heaven was first opened up, but not publicly. Rather, it was a private viewing for the shepherds. But it was a foretaste of things to come. There we got a glimpse of heavenly worship, the door opened up, when the angels sing “Glory be to thee O Lord, and on earth, peace goodwill toward men.” We can add “men with whom he is well pleased” if we go with all the cool translations, that is, the non-KJV translations. If those translations are correct, that adds fun stuff. The Lord is pleased with “men,” not just Jesus. But His pleasure with men must be seen in view of the baptism of Christ (in which the cross and resurrection is sealed), where He declared His pleasure with His Son, and those communally wrapped up in Him in the waters of the Jordan.

When heaven opens up, rain comes down, and rain is shorthand for grace, blessings, food…generally speaking, good stuff from God, like Jesus. It’s also shorthand for judgment, well, judgment for the wicked but blessing for those antagonized by the wicked. And that too is Jesus, who punishes those who antagonize those on the righteousness team. We learn this from the sheep and goats, a final judgment which has everything to do with how Jesus and His brethren are treated and received. So goats get washed away in the flood waters of Jesus’ judgment – thank God everything which causes sin is removed! For us sheep, the rain that is shorthand for Jesus is a great blessing.

In the beginning, the Holy Spirit hovered over the waters, because from the waters He would cause – separate – a creation. Waters are where creation happens. In the Bible, the removal of the Spirit often goes hand in hand with the drying of the creation. As the Psalm says, “You hide Your face, they are troubled; You take away their breath, they die and return to their dust.” Whatever mists rose up from the ground to help the Lord shape Adam in the shape of His image, Jesus, were removed as Adam returned to dust. Water, dust, and spirit are needed in the recipe of man, but the spirit binds it all together – remove the spirit, and the water and dust part ways as well.

It’s why John the Baptist was out in the desert. The desert is the nadir of God’s judgment of the earth. And it’s where the re-creation begins.

That’s because God promised a future rain, when the heavens would be opened up again. As Hosea prophesies, “He will come to us like the rain…” Or as Joel prophesies in the Pentecost prophecy (chapter 3), “And He will cause the rain to come down for you…I will pour out My Spirit on all flesh…”

The Lord’s nourishment of Israel in the Sinai desert is a type of this future rain. As the Psalm says, “Yet He had commanded the clouds above, And opened the doors of heaven, Had rained down manna on them to eat, And given them of the bread of heaven. Men ate angels’ food; He sent them food to the full.”

Jesus then, in John 6, teaches that He Himself, that is, His flesh, is this manna, this “bread of heaven,” this “angels food.” He is the one who poured down from heaven from God. He is the rain.

And that brings us to Isaiah, “Rain down, you heavens, from above, And let the skies pour down righteousness; Let the earth open, let them bring forth salvation, And let righteousness spring up together. I, the LORD, have created it.”

Yes, and that not only brings us full circle back to Jesus and John fulfilling “all” righteousness, but it lays the groundwork for a host of teaching, especially in Matthew’s Gospel. Righteousness is like a seed planted in the dry earth that springs forth with righteousness, that is, righteous people – read the Sermon on the Mount in view of the Parable of the Sower.

And we can’t help but see, in the seed, the image of Christ the Seed dying and buried in the ground, so that righteous saints can “spring up together” in His resurrection, as Matthew also shows us. In fact that “death-burial-resurrection” cycle is exactly what happens with all Jesus’ words, in our hearts. And they most certainly produce fruit, some thirty, sixty, or a hundredfold.

And it all began with the opening up of heaven in Christ’s baptism. The latter rains began. Down came the Holy Spirit, in Christ, who then is revealed, with John, as the righteous one of Israel, the Savior. The Spirit comes down bodily, on a bodily Savior, whose body is the bread from heaven that we hunger for, as we hunger and thirst for righteousness and are filled. As the Canaanite woman shows us, this for which we hunger is mercy, deliverance from our enemies. And Jesus answers, because He always answers them that beg for mercy, because in Him our Lord is pleased with us. This already the shepherds saw and heard when heaven was first opened up, and they heard the angels sing, “Glory to God in the highest, and peace to His people on earth,” peace because He’s well pleased with them, if the cool, non-church-language translations are to be believed.

“My son with whom I am well pleased” covers those in the Jordan with Jesus – the waters bind them. They responded to John’s message to turn tail and get in the Jordan, if they would be saved. Now, in the voice from heaven raining down by the Spirit in Jesus, they see why they should be in the Jordan. There, with Christ, God is pleased with them.

And Jesus spends the next three years teaching them how they share in the Father’s declaration. He plants His seed in them. He plants Himself in them. And righteousness springs forth, as the seed cast does the work, because that’s what seeds do, because seeds are the work of the Holy Spirit, Who gives life.

And a new creation comes forth.