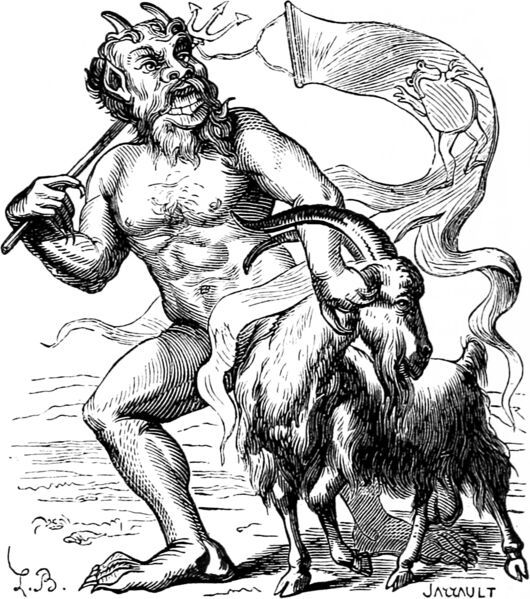 “When an unclean spirit goes out of a man, he goes through dry places, seeking rest; and finding none, he says, ‘I will return to my house from which I came.’”

There are some disparate strands of biblical imagery that could give an intriguing interpretation of this Gospel. What do we have so far? We have a house, a demon driven from the house, a wandering around in the wilderness, and a return to the house. The house is an image of a man.

Where do we see that narrative motif in Scripture, of something unclean being driven from a house into the wilderness? The thing that comes to mind is the scapegoat rite. Accordingly, at the temple (the house of God), the priest would take two goats. One goat was for the Lord and would be sacrificed. The other goat was “for Azazel” or “for departure” or “the goat of departure” or “a scapegoat.” Azazel by tradition became a chief demon, some even believing him to be Satan. In any event, the image calls for a goat bearing the sins of the people and being offered to a demon out in the wilderness. Symbolically, it almost exactly pairs up with the Gospel for this week.

Well yes, of course. But this is leading to a rather unorthodox reading of this Gospel.

Let’s rethink this Gospel using the Temple as the “house.” But remember, Jesus’ body is the Temple, and the Church is the new temple, our own bodies being temples of the Holy Spirit.

We have the scapegoat ritual. The goat absorbs all the unclean spirits of sin and guilt, the power of Satan. He’s cast out into the dry places, seeking rest. In the end he comes back with seven demons stronger than himself, and they re-inhabit the house from which they came, the temple, the body, symbolized by the body of the Jewish people and their religion.

[In Jesus day, there was a belief that the priest put a red thread around the goat’s neck, and once the goat went out into the wilderness, it slowly turned white. However, tradition says around 40 years before the destruction of the Temple (ahem, that’s around 30 AD…anything important happen around then?) the thread stopped turning white.]

But Jesus is a new house, a new temple, offering a new body, and a new body of believers, the Church. The Jewish temple is abandoned, swept and cleaned, while the new temple moves on, with its stronger man in charge, Jesus, freed of all the demons.

This makes Jesus confrontation with Satan in the wilderness pivotal in understanding this text. It was here, on behalf of the “house” (the temple as type of the human body, and ultimately as a type of the whole creation), that Jesus the Stronger man ended the devil’s authority to accuse (or better, began what ended at the cross).

Now, what of these “dry places seeking rest.” Azazel means “sent out one” or “goat of departure.” Whatever the case, there’s the sense of “being sent away,” and that into the dry places.

There is an example in the Bible of a wet place, not a dry place where “sent away” (Azazel) is present, but a wet place where water was “sent” into the dryness, having gushed out, probably in the context of John’s Gospel (where the episode is recorded) a reference to the Holy Spirit.  This is the pool of Siloam, which means “Sent.”

Whether all these images may or may not be informing the Oculi Gospel for this week, theologically they certainly all fit. Outside the “the house,” which is the restored “temple of the Holy Spirit ” – that is, the one whose body is the Temple, Jesus – is dryness, the death and dust which must happen when one is separated from the “Lord and Giver of life.”

Satan’s demons desperately seek the wet, bodily places where they can possibly find “rest” and “peace.” But they are banned, and the best they can do is possess a poor soul, pretending to be connected to the Lord and giver of life through the body. But all they do is destroy, because all they do is lie and deceive, for their rebellion is permanent.

But Jesus is the new Temple, the new house, the one forever anointed by the Holy Spirit, and His “stronger man” victory over the devil in the wilderness reverses course. No longer is man under the power of Azazel – sent away into the dust of death with the guilt of sin. No, Jesus as man took that path but then defeated the devil and reversed course. Now, we live in the wet places of our baptism, the place where the waters are “sent” and come gushing forth from the rock, which is Christ.

Like I say, there are a lot of disparate strands here. But the Bible often does this, and the layers of meaning are many.