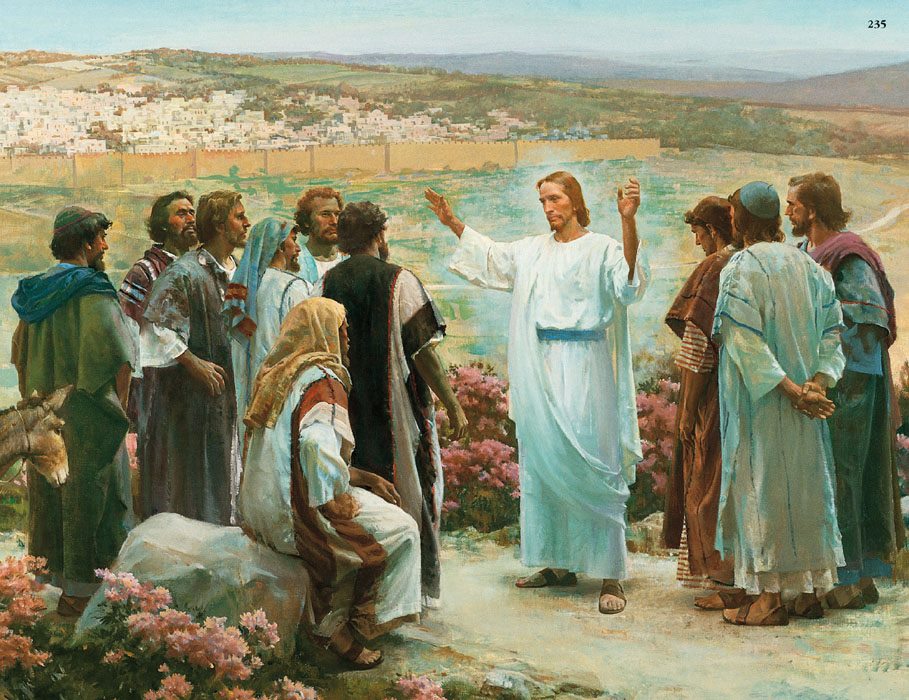 Later He appeared to the eleven as they sat at the table; and He rebuked their unbelief and hardness of heart, because they did not believe those who had seen Him after He had risen. And He said to them, “Go into all the world and preach the gospel to every creature. He who believes and is baptized will be saved; but he who does not believe will be condemned.

The Gospel for Ascension Day comes from Mark 16. We have two days to cover this text which brings up so much, so let’s get started.

First, we see Jesus rebuking the disciples for their lack of faith. I’ve defended the disciples before, particularly Thomas, when people interpret Jesus to be scolding them, but here it’s pretty clear. Jesus is rebuking them. But let’s probe what this means. It’s not lack of belief in the way of Hollywood, where “Just believe and great things can happen” is so often the theme. It’s not some mystical understanding of faith (as John perhaps might describe it). Rather, it’s simply to claim something you cannot or did not see, based on the testimony of another.

Mary, and the two disciples on the road to Emmaus, witnessed the resurrected Christ. They saw what they saw. It was true. To reject objective truth in favor of preconceived biases rooted in a seemingly science-based cynicism – dead means dead and no one rises from the dead – is definitely something to rebuke, especially to those who had witnessed Jesus defy science so often before.

Also, we shouldn’t read too much into Mary’s testimony, as many do. “She was a woman! She had a low status and her witness would be suspect! Despite that, Jesus chose her to be her first witness.” I’m suspect of that interpretation, so often heard, because it seems like modernistic virtue-signaling in the face of feminism: “See how sensitive I am to women! I’m willing to emphasize how Jesus used women as witnesses.”

I’m not entirely sure it matters whether a woman’s witness was accepted or not. Jesus’ point about the disciples’ belief is not about who conveyed their witness to them, or what sex they were. His point is that His resurrection was an objectively witnessed phenomenon that was bigger than the status of those who witnessed it. I suppose if we were in a highly patriarchal phase in cultural history, we could make the point that Jesus chose a woman to testify to amplify the validity of His resurrection, in the sense of, “Look how true this event must have been, even a woman could testify to it!”

But that is the way of reading ideology into the text, and not letting the text stand on its own.

A witness is confirmed by the testimony of two or three witnesses. Mary, and the two on the road to Emmaus, saw Jesus. The disciples should have believed, but didn’t because of their science-based cynicism. And how often is this the case today as well. To this day, the resurrection remains a logically difficult event to disprove. 500 witnessed the resurrected Jesus. There clearly was something that caused a religion to rise up and change the course of history. Christ’s ethical teachings aren’t really all that earth-shattering and were taught in the Old Testament, as well as in other religions and philosophies. His messianic claims were no different than many, many others.

But what lifted Christianity to the next level was that one event, the resurrection of Jesus Christ. So certain was this for so many, that they were willing to endure excruciating torture rather than give up this faith. Yet, despite all this evidence, these facts, today’s scientific cynics maintain their cynicism. They too should be rebuked. There’s a certain foolishness in their way of thinking, choosing to let their presumptions cloud their rational, evidence-gathering faculties.

The next little detail in this Mark account is the passage, “Go into all the world and preach the gospel to every creature.” That’s an interesting way to phrase it. Preach to every creature?

Well, we know the answer to that question, because Christ has come not just to restore mankind, but all creation. He fills all things in heaven and on earth and under the earth. Adam’s sin is why “the whole creation groans and labors with birth pangs together until now,” but yet, the whole “creation eagerly waits for the revealing of the sons of God,” knowing that on that day, “the creation itself also will be delivered from the bondage of corruption into the glorious liberty of the children of God.”

So of course we preach to all creatures! All creation glorifies God. All creation will be renewed. The Word from God caused the creation to come into existence. The preached Word will bring about the new creation.

Now, what about the first question, how on earth were the apostles to fulfill Jesus’ command to preach to every creature? Some in the early church actually believed the disciples continued their ministry in Sheol, or Hades, upon their deaths, preaching to those who couldn’t hear on earth. So maybe the answer to the “how on earth” question is, “It’s not on earth!”

St. Paul was able to write about the Gospel that it had been preached to “every creature under heaven.” And that’s “was preached” not “will be preached.” So evidently Jesus’ command was fulfilled! Every creature heard already by the time of Paul!

And finally, Paul also writes, “But I say, have they not heard? Yes indeed: ‘Their sound has gone out to all the earth, And their words to the ends of the world.” So, everyone has heard! All creatures!

So much for Gospel urgency, right? If all creatures have heard, why do mission executives act like the eternal lives of vast hordes of heathen are at risk due to my negligence, laziness, or lack of giving. It does make one think, doesn’t it?

In some profound, mysterious, eschatological way we probably cannot fully understand, Jesus has seen to the universal proclamation of the Gospel to every creature, and this by the time of St. Paul. It’s almost as if His sitting at God’s right hand released the Holy Spirit, Who went forth immediately and began renewing the face of the earth, delivering by declaration what Christ had retained, not just the restoration of humanity, but the restoration of all creation. As the Psalm says, “You send forth Your Spirit, they are created; And You renew the face of the earth.”

But where does the particularized proclamation of particular preaches fit in that? At the time of Paul, certainly the Gospel had not gone to the ends of the earth, nor was it heard by every creature. But remember, St. Paul is dealing in heavenly realities. Clearly something is fully realized in heaven – something that those whose minds are glued there (like St. Paul) are fully witnessing – that has a bit of a lag here on earth. So, the preaching on earth of the Gospel is working its way toward what in fact, in heaven, has been already fulfilled, the extension of the Gospel to every creature under heaven.

We’re dealing with mysteries here, but lets leave it at that for the moment.

The fact is, as the passage is typically interpreted, it’s a paradox. Two things are required for salvation: faith and baptism. Meanwhile, only one thing is required to be damned, lack of faith.

That turns Christ into a speaker of nonsensical things. What sort of practice do you build from that? “Be baptized, it’s really important, and believe; but if you weren’t baptized, don’t worry, because only if you don’t believe will you go to hell.” Huh?

Let’s tighten things up a bit.

First off, the word for “do not believe” is not simply a passive lack of faith, but an active refusal to believe. It’s an active rejection. Here is what one lexicon says, “[I]n Mk 16:16 it may be possible to translate ‘whoever refuses to believe the good news shall be condemned.’”

There’s an active refusal going on.

Second, baptism and faith have always been the doorway into the church based on these words. Baptism is not some incidental rite with casual symbology that we can take or leave. No, it’s critical for salvation. Let’s put it in this irrefutable way: if one is not baptized, they are missing one of the two things Jesus said must happen for one to be saved.

Are there other categories of people? Of course there are. Those who believe but aren’t baptized. Those who haven’t actively refused the Gospel but don’t believe due to never having heard the word.

Well, the early church, again, came up with several solutions to fill in the details. Here, for instance, is where Limbo came into the picture (not Purgatory). Or, here is where the idea that the disciples continued baptizing after death began, or that there are also “baptisms of blood” for those who were martyred prior to baptism.

I actually prefer these solutions than to the modern dismissal of baptism as not really essential for salvation. That’s heresy, while Limbo is a concept rooted in speculation necessitated by Christ’s words.

I guess in the end we can go back to what we meditated on earlier, that the Gospel and its baptism will go forth to every creature. How will this happen? This is probably above our pay grade this side of heaven. We are not given the “how’s” here, but only the “what.” What? “Every creature.” How? Who knows.