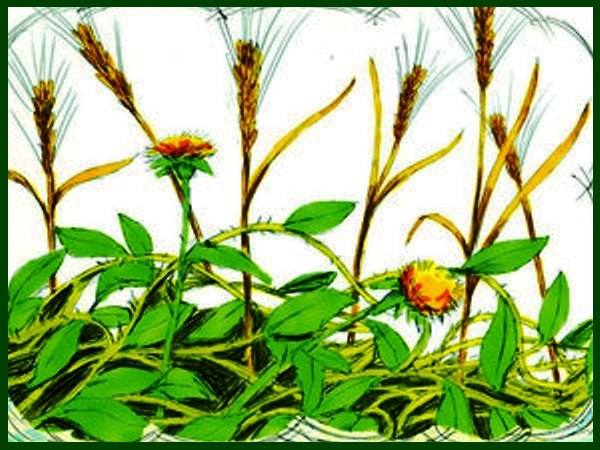 The third seed of the Sower fell among the thorns. These are “those who, when they have heard [the Word], go out and are choked with cares, riches, and pleasures of life, and bring no fruit to maturity.”

Cares, riches, and pleasures of life. Cares are anxieties about the concerns of this world. Riches are, well, riches. The Greek word for “pleasures” of life is the root of the word “hedonism.” It’s a life lived in pleasure.

The common theme in each of these temptations – the thing which chokes the faith – is the eclipsing of faith’s vision. Faith sets its heart and mind on the “life of the world to come” rooted in the conviction that Christ has risen from the dead – the firstfruits of those who have fallen asleep – and one day we will follow where He has gone and enjoy a world we cannot even fathom now, a world we will find immense “pleasure” in, in our bodies.

Such a vision is why Christians see themselves as pilgrims passing through this world. Things may go well for us during our pilgrimage; things may go not so well. If they go well, praise God and may they be used in reflection of God’s own liberality and generosity, for the welfare of our neighbor. If they go not so well, how blessed a reward will be that moment when we face our Lord at the end of our struggles.

Here’s the non-pilgrim way to look at the world. This is the way of the weed, which chokes faith. The vision of a world to come is eclipsed, and one begins to think his life in this world isn’t just a pilgrimage, but he’s got his one shot to squeeze everything he can out of this world, before his spirit is freed and returns to wherever.

If this world is all there is, I’d love someone to explain to me how anything but hedonism would be the ultimate quest. I’d love someone to explain to me how “Eat, drink, and be merry” would not be the motto. I know, I know, the likes of Aristotle argued the pleasures of higher virtues – though more difficult to discern – are in the end better. There’s a far greater pleasure in learning knowledge or wisdom about something and building something based on that wisdom, than, say, living each day seeking out your next buzz or high. But for the less philosophically endowed, why not live each day simply going from one buzz to the next?

The flips side of hedonism is not the virtuous life, however. This is something we learned from the Gnostics. The opposite of vice is not virtue, but vice on the opposite extreme. The lazy man’s extreme remedy to his vice is workaholicism.. The opposite of gluttony is extreme asceticism. The opposite of promiscuity is scorning any sexual contact, even marriage. In each case, the latter is simply the negative image of the former, often with the same root compulsions at work, even as hate and love are very often flip sides of the same emotion.

Such was the position of the Gnostics, either to indulge or deny every bodily activity, both rooted in the notion that the body is irrelevant as far as the spirit is concerned, so either deny it altogether, or indulge it because it doesn’t matter. Both hedonism and asceticism are rooted in the same gnostic compulsions founded on their negative view of the body.

We are seeing these extremes once again. The indulgent sexual revolution has spawned the #metoo piety of total removal from any sort of normal human interaction with the opposite sex. Profligacy in eating or drinking habits gives way to veganism. The same society that seems to idolize in vanity the perfect human body fosters the flip-side view that the body is nothing more than a canvass for one’s dark self expression.

It’s all the same: the body is a vessel we use for a few years before our spirits drift off into the eternal beyond. Both the hedonistic pleasures of the body and the perverse pleasure of mortifying it are guilty of the same weed-choking temptation, that this life and this body is all we got, and then that’s it.

A faith rooted in the God who became flesh recognizes a “sweet spot” in the middle of these extremes, centered on a healthy understanding of the body. Our bodies we will resurrect in, and we will enjoy divine pleasures and divine riches in our bodies forever. With this guarantee, there need not be any anxiety about getting the most zest out of life now, or else we’ll miss out.

The weed bears no fruit, even as a life of hedonism and wealth-seeking ends up pretty empty and full of many anxieties. But the one with faith in Christ can forego these things, bearing the fruit of confessed faith, and reaping divine pleasures that will never end.