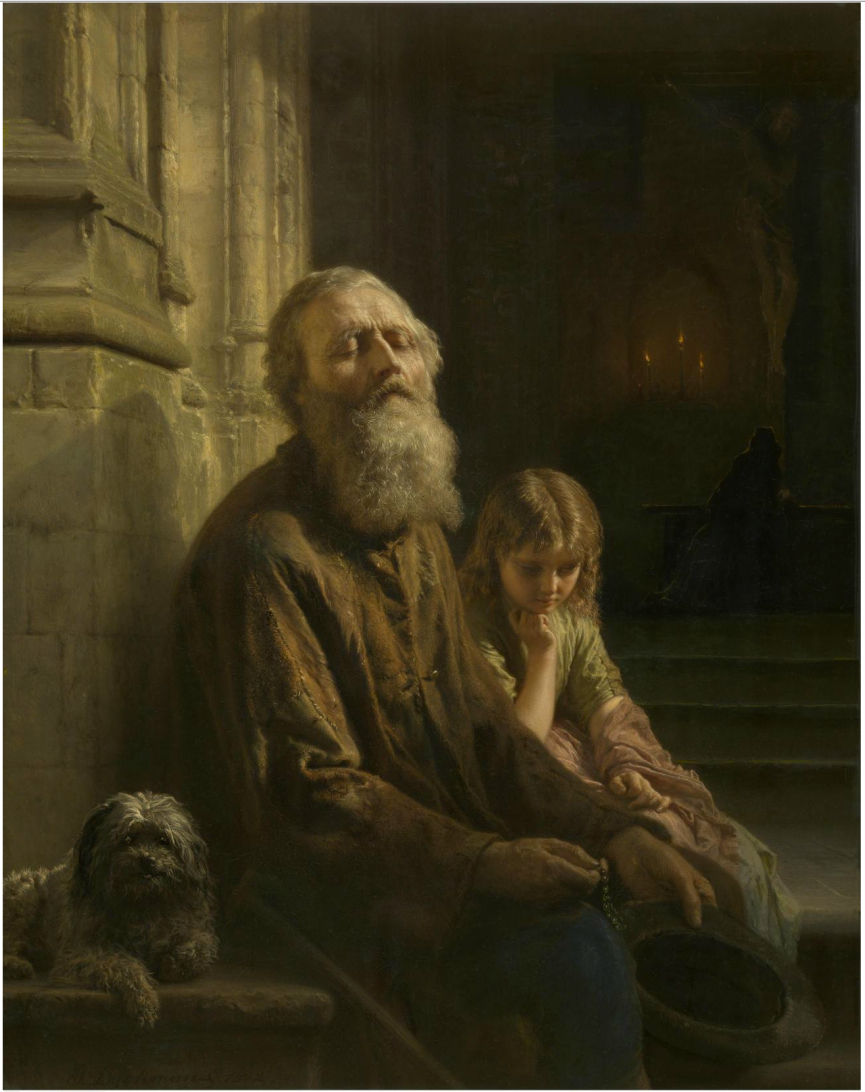 “So that servant came and reported these things to his master. Then the master of the house, being angry, said to his servant, ‘Go out quickly into the streets and lanes of the city, and bring in here the poor and the maimed and the lame and the blind.’ And the servant said, ‘Master, it is done as you commanded, and still there is room.’ Then the master said to the servant, ‘Go out into the highways and hedges,’ ”

Last meditation we focused on the literal meaning of the parable, that the Church should be a place which sends out its invitation to the poor, the maimed, the lame, and the blind. The Church has always been about charity on account of texts like this. Yes, there is always lurking beneath the surface that the true poverty, the true lameness, and the true blindness we have is spiritual, but that doesn’t take away from what Jesus teaches about how the Church should deal with those with literal poverty, lameness, and blindness.

But an overemphasis on the literal meaning will lead the church to be nothing more than a social organization. Of course, very often the literal meaning intersects with the spiritual, as it does in this week’s Gospel. What began with the man with dropsy ended with Jesus talking about the heavenly meal for the spiritual beggars and vagabonds of the world, even Gentiles.

Something similar happened with the Canaanite woman. She was poor, a beggar, with a load of debilitating challenges, and Jesus used her situation to teach about faith and the bread which He brings. She cried out, “Lord, have mercy,” and clung to the crumb of bread Jesus cast toward her. What a powerful lesson on grace, whose deeper spiritual meaning we are all quite familiar with! Because how often are we the beggar clinging to that one crumb?

So that is the proper way to read this week’s parable as well. It suggests we should be welcoming to the truly needy, that is true, but that is a derivative, not primary, meaning. The primary meaning is that the great banquet is a complete gift of grace for those who cannot take care of themselves. It is a true gift, not even preceded by an act of preparation like the Canaanite woman’s prayer, “Lord, have mercy.” The invitation, as it were, came completely out of the blue, a true gift dropped in their laps.

And then, when the banquet hall is still empty, we get an even more radical display of this grace, when the remaining vagabonds are “compelled” to come in. Very often grace has to compel, to overcome the natural human tendency to not receive gifts. It’s like the host insisting to her guest, “No, I insist, please have more pie.”

But this sort of meaning is the only way to make the Gospel consistent. The Gospel is not just a social message about the poor, as the liberation Gospel teaches. Nor will only the poor be in heaven – that’s ridiculous. But those in spiritual poverty are they who seek out the Gospel.

The spiritual poor are those who lack in what they can offer God spiritually. What can they give? They recognize the Lord for who He is, completely self-sufficient. He needs nothing from us. Many people, albeit rightly, are scoffing at the consumeristic idea that people seek a church which “fits their needs.” They’ll say, “We don’t go to church because what we get out of it, but what we can put into it.” Yet, this isn’t exactly accurate either. Church does center on the Lord’s invitation and gifts. We go to church as beggars, and if there’s something we offer there, it’s our confession, praise, and thanksgiving, which are each in reaction to the Lord’s gifts. And as we see in the parable, we dare not act as if our acts of worship are making effective the invitation.

The spiritual maimed are those who are missing something that prevents them from acting fully as God intended them. Wow. Where could we go with that one? Could we speak about some being maimed in their prayer life? Or maimed in their understanding of the Gospel? Perhaps we could. If nothing else it reminds us that, even for the spiritually maimed, it’s not their aptitude that makes the invitation effective, but the invitation. We might also note that, at the table, being maimed loses some of its negative effects. As long as you have a mouth that can open, you can receive the gifts. This speaks to a truth I’ve contemplated, that no member of a congregation looks so good as they do when they’re at the table with mouths opened – no griping, no bad doctrine, no trashing of other people, no sinning, no acts of being maimed – just pure reception of the gifts, perfect faith in action.

The spiritual lame are similar. They still have the body part, but it’s lame. They may have the form of whatever it is that would enable them to act as God intended, but it doesn’t work. Imagine the maimed as someone who simply has no capacity to do something, whereas the lame have the form of that capacity, but cannot live it out for whatever reason. Some Christians simply have no prayer life; they wouldn’t even know how to act on it if they could. Other Christians have the forms of a prayer life, but for whatever reason that part of their faith is lame.

Is this a proper interpretation of Jesus’ words? If so, could we apply them to other aspects of faith life? Are there some who are maimed as far as telling the truth, chastity, charity, or obedience goes? They are Christian but simply are missing that aspect of their soul. Or maybe they are lame; they still the forms of truth-telling, chastity, charity, or obedience, but for whatever reason cannot act on it? This is an interesting question.

Or was Jesus speaking strictly of doctrine relative to the Jewish misinterpretation of the Law. Such were the first converts to Christianity, those who, by the standards of the Pharisees, were unacceptable on account of their abysmal reception of their rules and regulations.

Whatever the case, the focus of the parable is on God’s grace.

Finally we get to the blind. The spiritually blind are they who are not clear-sighted as far as spiritual things goes. For the blind, there are no distinctions, no discernment of light and darkness, and by implication, between truth and error. These too are the spiritually numb, or poor.

Again, how wonderful that for them, as well as for the previous three, the meal is not dependent on their ability to apprehend it, but on the master’s invitation. The meal was prepared. The meat was slaughtered. The feast was ready. It just needed people to eat it.