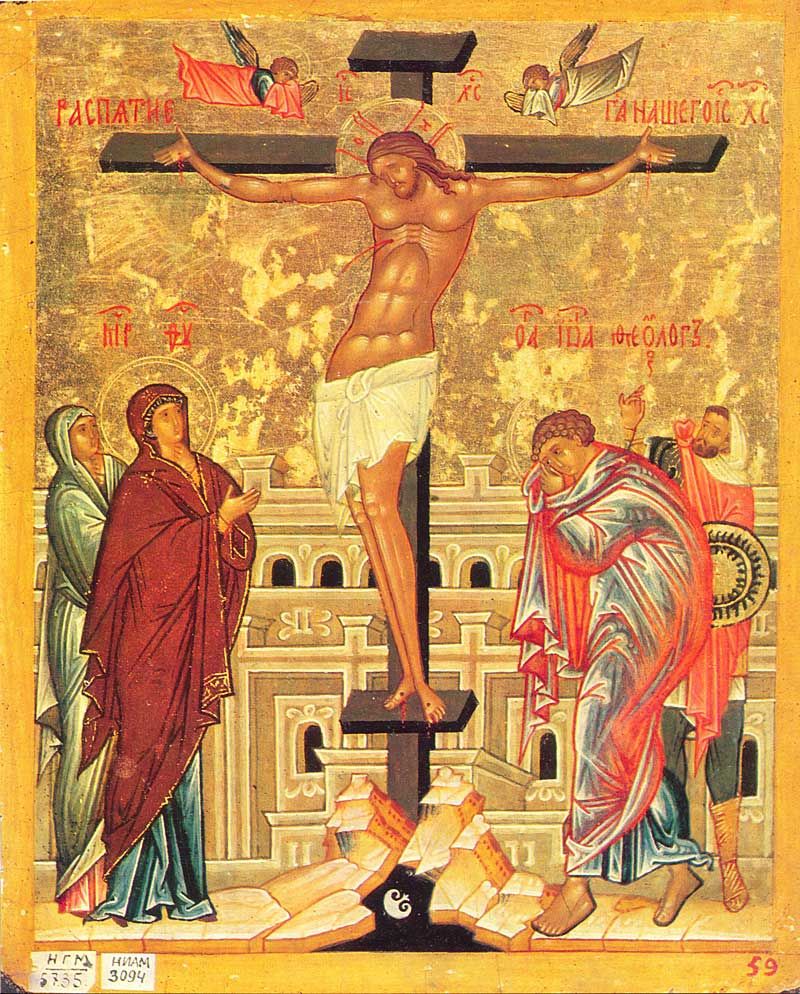 It’s interesting to look at how the crucifixion of Christ has been depicted in the history of art. If you look at the very old paintings, paintings prior to, say 1400, Jesus doesn’t seem to be in a lot of pain. He looks serene. There’s a halo around his head. And the people around him – His mother, Mary Magdelene, John – all look peaceful and contemplative.

And then around 1400 you started getting more humanity in the paintings. You started seeing Jesus writhing in pain. You started seeing the characters in the scene display raw emotion. Even the natural environment around Jesus began to change. Where the older works placed Jesus in the golden background, the latter works showed the stark darkness of the day.

Well, you could say these two ways of viewing Christ’s death parallel the two different types of accounts we get of Jesus’ death in the Gospels. Matthew, Mark, and Luke – which look alike and used each other in their writing – are very much the “just the facts” version of the crucifixion. They display the gore, the darkness of the day, and provide the material for those later works of art.

But John’s Passion account stands out from these. In John’s Gospel, the Passion is Christ’s moment of glory. The cross is His triumph. The cross is the finalization of His mission. John’s Gospel provides material that shows why for us, the cross is a sign of victory.

But there’s something more going on. Keep in mind, a big theme in John’s Gospel is that Jesus has come to re-create a fallen creation. Remember when He took that clay and put it on the blind man’s eyes? He was doing just at the Lord did in the beginning with Adam, turning clay into life. But Jesus wasn’t starting from scratch, he was working with broken people. He was working with you and me.

So think of it this way. On the last day of creation, it is written, “Thus the heavens and the earth, and all the host of them, were finished.” But then Adam and Eve sinned, introducing death into the world, and caused the whole creation to have to go back to the dust.  If the Lord was finished, He had to come out of retirement.

This is why Jesus said several times in the Gospel of John, “My food is to do the will of Him who sent Me, and to finish His work.” Or again, “My Father has been working until now, and I have been working.” Or think of these words which echo the creation account, “I must work the works of Him who sent Me while it is day; the night is coming when no one can work.”

So clearly, the Lord is no longer at rest, and the Sabbath Day of Rest is not really inaugurated. That is what Jesus came to do. He came to finish the Lord’s work, the Lord’s work of creation. So, when He said “It is finished,” only then could it be truly said the work of creation was finished. And now the Sabbath Day, the sixth day of rest – Jesus’ rest in the tomb – can truly happen, so that a new day of creation can arise, an eighth day, a day of light piercing the darkness, a day of new creation.

At Jesus’ death in the Gospel of John, it says Jesus handed over three elements. Notice how these elements parallel the elements that had created Adam. Water, blood, and spirit. When God molded Adam at the creation, it says there was a mist coming up from the ground, and God took the dust from the earth, making it a mud with the mist – and by the way, it’s interesting that in Hebrew the word for earth is related to the word for blood – and then God breathed His spirit of life into Adam.

When Jesus died, He handed over His Spirit, and then water and blood flowed out of Him. These are the elements of the new creation. The Spirit of Absolution that gives us life. The waters of Holy Baptism, and the blood of Holy Communion.

John’s Gospel is a victory anthem, not a sad tale of human woe. Jesus died not so you might feel sorry for Him, but so that you might have life, and have it to the full.