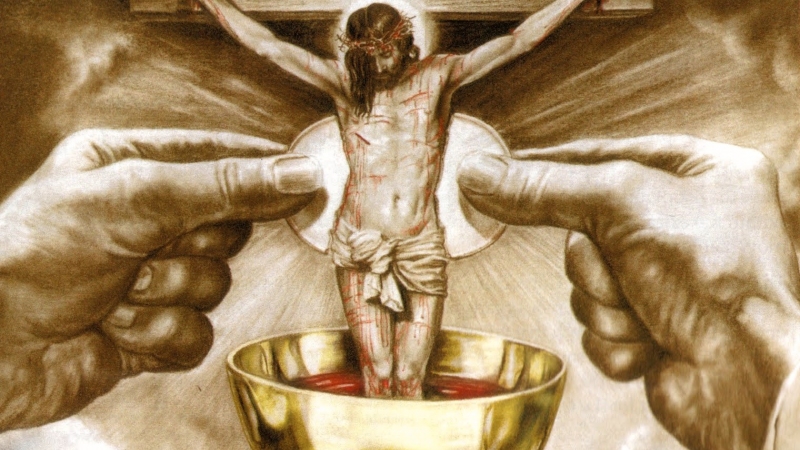 These words strike at the heart of the entire Gnostic message and all its heirs. These were the words that caused second century bishop Irenaeus, writing against the Gnostics, to remark, “But if [the flesh] indeed does not obtain salvation, then neither did the Lord redeem us with His blood, nor is the cup of the Eucharist the communion of His blood. [And when] the mingled cup and the baked bread receive the Word of God, and the Eucharist of the blood and the body of Christ is made . . . how can they [the Gnostics] maintain that the flesh is incapable of receiving the gift of God?”

The Real Presence is a non-negotiable as far as an orthodox church does. Historically, we have those words just quoted, from the second century bishop Irenaeus. If this was the “apostate church” at work setting forth man’s traditions in place of God’s Word, that’s quite a bit of negligence on the Holy Spirit’s part that quickly.

And if you’re a “Bible-believing” Christian, we can’t get much more clear thank “This is my body.” If that’s not enough, we get, “unless you eat the flesh of the Son of Man and drink His blood, you have no life in you.” Finally, there’s St. Paul, “The cup of blessing which we bless, is it not the communion of the blood of Christ? The bread which we break, is it not the communion of the body of Christ?”

It takes an act of will to make both these historical and biblical witnesses to be something other than what they are. What is that will? It’s the underlying theological ideology – otherwise known as “man’s traditions” – forcing the historical and biblical data to serve the idea that salvation is an internal, spiritual, psychological occurrence happening in the subjective faculties of heart, mind, and soul, or that God cannot be contained by finite, physical things.

The Gnostics at least were respectful enough simply to deny the historic Church’s witness as ignorant and cut out 3/4 of the Scriptures. Today’s Neo-Gnostic, Real-Presence deniers actually have the gall to claim their position is Bible-based and supported by history. Like I said, given the clear testimony of Scripture, this is a willful act of self-delusion.

But why is the Real Presence so important?

The answer is, because to deny it is to release God from His promise where He is to be found, and leave the locating of Him to our own devices, to find Him lurking all over the place, mingled in our own psychological or spiritual faculties. That has huge problems we’ll get to in a bit. But let’s first contemplate why we shouldn’t “release God from His self-imposed box.”

The whole beauty of God becoming flesh is it locates for us where God is to be found, and not just found in general, but found in His mercy. God is everywhere, very true. But where is God “for me”? The bordered, delineated, defined body of Jesus Christ answers that question. If you were a leper seeking help from God, you didn’t go six feet to the left of Jesus, or six feet to the right. You went to the one outlined by His flesh and blood.

It’s still a body defined by borders! And that Church, that body, is the boxed, bordered, delineated location of the promise.  It’s the box where God in His mercy is to be found. For what other words do you hear connected to the Body and Blood of Christ other than, “Given and shed for you for the forgiveness of your sins.”

Outside of the church, like the leper hunting for God outside of Christ, you’ll certainly get God. God is everywhere after all. But there are two “works” of God, His primary work and His alien work. His primary work – Who He is – is to create, love, give life, and have mercy. His alien work – What He does in response to man’s action – is justice, wrath, the four horsemen of the apocalypse: war, famine, pestilence, and so on.

Satan himself is managed by God’s alien work, as we see in the two accounts of David’s census of Israel, where in one account we hear Satan moved him to do the census, and in the other one we hear it’s the Lord’s wrath that did it.

If this all sounds harsh and capricious on God’s part, keep in mind that His primary work is always, well, primary.  Also, remember that, as St. Paul wrote, God works all things for the good of those who love Him.

Meantime, Luther’s statement stands, that if you would seek God – and it’s implied you’re seeking God’s mercy here – outside of Christ, you will only find the devil.

Well, back to the Real Presence. That’s what the Real Presence assures us of. At communion, because it’s truly Christ’s body and blood, we will always find our loving, merciful, forgiving Lord.

To deny the Real Presence allows the location of God to leak into all sorts of subjective areas – our hearts, our minds, our wills – and yes, very often we will confuse God with those dark satanic temptations and motives that lurk within.

Does God love me? Go to communion and get a clear answer, because there Jesus is waiting for His lepers. Go to your inner Self and listen to silent whispers you think are God talking to you, and who knows what you’ll get. You’ll get a lot of deceit, that’s for sure, a lot of antichristian voices claiming to be Christ.  For who is the antichrist, St. John writes, but he who denies that Christ HAS COME (perfect tense:  once done with continuing effect) in the flesh.  Isn’t that exactly what inventing words of a Christ outside of His ordained flesh and blood means is doing?

But inner voices are not what the Lord left behind for His Church. He left behind the gift, His body and blood, through which He gives the word and promise that cannot change: My body, given unto death for you; My blood, shed on the cross for the forgiveness of your sins.