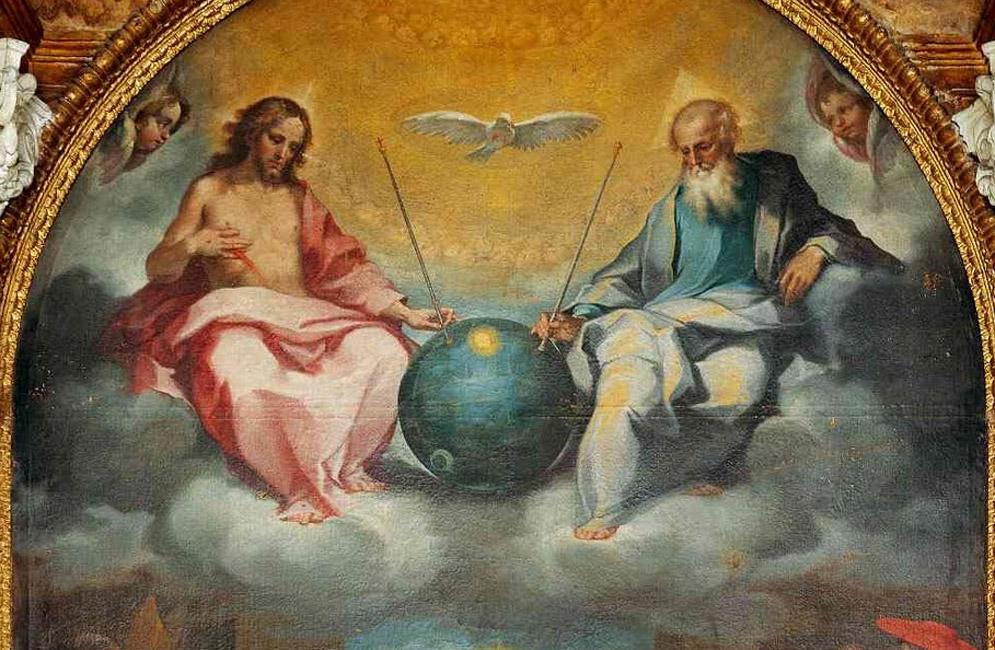 This is an odd little passage. In general it’s simple: the disciples will not see Jesus, and then they’ll see Him again. But filling in the blanks of this passage is a bit more tricky.

Key to interpretation is where we place the phrase “because I go to the Father.”

If we go with the interpretation that Jesus is saying He’ll be away from His disciples for three days – “because he goes to the Father” – and then they will see Him again, this would suggest Jesus died and went to the Father. He does say, after all, “Father, into your hands I commend my spirit.” And he tells the thief, “Today you will be with me in Paradise.” So, the day Jesus died He somehow went to the Father. This would explain why Jesus says they will weep and mourn while He’s gone, because He has died.

Or is the phrase “because he goes to the Father” a misplaced modifier, which should go with the whole statement in general, as in “Because I’m going to the Father, you will no longer see me; but after a little while, you will see me again.” Here, Jesus is speaking of His ascension, and talking about all His disciples through time. This seems to make sense, as now we’re in a period where we don’t “see” Jesus, in this time when He’s “with the Father” at His right hand. Here, the sorrow would be because we’re in this veil of tears waiting for Jesus to return.

Or does that modifier go with the latter part of His statement and read just as it says, as in “I will die and be away from you, but then I will rise again and you will see me, because I go to the Father.” This is a bit more mystifying, because it in essence claims that after Jesus rises and goes to the Father (i.e. His ascension), we will see Him; indeed, His going to the Father is the cause of our seeing Him. That just seems strange.

Yet, that’s how the passage runs, and generally, as more friction produces more light, so does tackling a more difficult passage yield better fruits. We will see Jesus because He goes to the Father.

To get some understanding, we have to ask, what is it about Jesus “going to the Father” that is so critical to our salvation, so critical that when Mary tried to hug Jesus, He told her not to cling to Him, for He had not yet ascended to the Father?

Several passages in John answer this question. For instance, Jesus says His disciples will do “greater works” than He did, “because I go to the Father.” Jesus had previously declared that “the Father is greater than I,” and said this is why we should be glad He’s going back to the Father. In other words, it’s a good thing Jesus is going back to the Father, because, the Father being greater than Jesus, this will set up the foundation for the disciples doing greater things than Jesus did while He was on earth. What are these greater things? Let’s put that on the back burner.

In another place Jesus says it is to our advantage that He returns to the Father, because if He goes, He will send the Holy Spirit, who will “take what is mine and declare it to you.” What belongs to Jesus? Eternal life, restored fellowship of man with God, joy, the status of sonship, and so on. These things Jesus delivers to us – having sat down at God’s right hand – by the Holy Spirit.

This nicely fits with what Jesus says the Holy Spirit will “convict the world” of (or, “prove the world wrong” about). Sin is not believing in Jesus; righteousness is Jesus “going to the Father”; and judgment is when the devil is judged, our Accuser cast our of heaven.

Jesus breathed out the Holy Spirit, the eternal life, upon the disciples, and this was the forgiveness of sins. “If you forgive the sins of any, they are forgiven.” Forgiveness, along with faith, confessing faith in the Triune God, eating Jesus’ flesh and blood, hearing the words of the Gospel and Scriptures, coming to the light that our deeds might be exposed, and doing good (good being defined as everything above) are in the Gospel of John all the things that lead to eternal life.

And these are the “greater things than what Jesus did” that the disciples will do. Jesus had not yet restored man into fellowship with the Father, ended the curse, and cast out the devil. But now that He went to the Father, the stage is set for these “greater” things to happen, by the ministry of the apostles whom Jesus sent out to forgive sins.

So, what does all this have to do with “seeing Jesus” once He goes to the Father. I think this parallels Jesus’ words to Mary, that she should not cling to Him because He had not yet returned to the Father. Similarly, our true “seeing” of Jesus is not in His earthly form, but in a new form, by faith. In the same we we’ve been observing how in Jesus’ post-resurrection appearances, no one recognizes Him – they don’t “see” Him as He was. But when He calls their name, or breaks bread, or speaks to them, then they “see” Him in a new way. It’s the “seeing” through faith, which is the “seeing without seeing” that Jesus promised would be blessed by those, unlike Thomas, who believed without seeing.

We see Him where life is given out, where He speaks His voice, where the bread breaks and we eat His flesh and blood, where we hear the Scriptures, where forgiveness is proclaimed by the sent ones.

There was sorrow when Jesus lay in the tomb, but now that He has gone to the Father, there is joy. We may not see it, but oh, we do! “You will see Me, because I go to the Father.” That’s why we should have joy. That’s why we’re commanded to have joy. You who weep, let your eyes be filled with your Lord, sitting at God’s right hand. He has overcome the world.