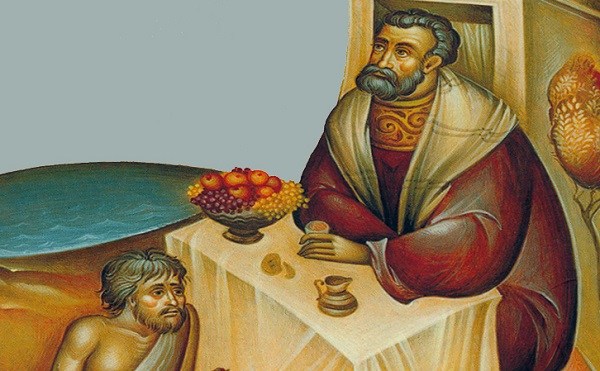 “There was a certain rich man who was clothed in purple and fine linen and fared sumptuously every day. But there was a certain beggar named Lazarus, full of sores, who was laid at his gate, desiring to be fed with the crumbs which fell from the rich man’s table.”

The Lord gives His gifts in order to be given out in turn. “Be fruitful and multiply” was his first command to mankind. The nature of fruit is to burst in abundance. Giving gifts is essential to His Trinitarian nature, even as the Father has been eternally giving of Himself in the Son, by the Holy Spirit, the Lord and giver of life.

Givers give to beggars. Why beggars? Because begging suggests a humble posture before the one who can give. Giving to those who don’t want what you have to give is fruitless. The Son of God, in a sense, has eternally looked up to His Father as the source of His existence, and has ever submitted to Him as such. As Jesus said, “I do nothing of Myself; but as My Father taught Me, I speak these things.”

Givers and beggars is binary seen in so much human interaction. What one has to give, another needs and must assume a posture of begging. This is true from the moment of birth and continues on at various levels throughout our days. “We are beggars, this is true,” said Luther at the end of his days, but the opposite is true as well, “We are givers, this is true.”

Obviously, at face value, the rich man was given much, to be able to give to the beggar. And this is true. But yet, he didn’t give out from his abundance, and here’s where things get interesting.

The rich man didn’t give because he had nothing to give. Of course he had all sorts of things to give, but he really didn’t have anything to give. He had set himself on a course to create heaven on earth. If heaven is understood as the place of eternal bliss and blessing, and one were to try to build that on earth, this will consume every fiber of one’s being to reach the unattainable.

The Scriptures warn against riches due to this “heaven on earth” temptation. The one seeking riches usually has the pride of self-deification, is harsh toward others as he knows what he selfishly wants and goes for it, has a false sense of security due to it, and worries once he has it. He has no time or even thought of caring for others; he’s too busy deifying himself! Or put another way, again, he has nothing to give.

Whereas the rich man in this week’s Gospel, arguably, had nothing to give in his poverty, the one who by worldly standards is “poor,” can give freely from his great riches. What riches? Whatever one has in abundance need not be monetary. God gives gifts to everyone, and He calls us to “freely give” out of what He has given us. That could be time, prayers, care, a listening ear, artwork, baked goods, construction skills, and whatever else. Again, all the world is set up in that giver/beggar binary. Everyone has something to give.

Yes, even Lazarus. Goodness, Lazarous more than just about anyone. Consider what Jesus has done with the name Lazarus. Lazarus has become the golden ticket! To prove this, do this thought experiment. Imagine if you could go back in time to the days of Lazarus, and you saw him at the gates. Would you not feed him? Has not Lazarus just become an incredible gift to you? You can feed the person the rich man ignored! Heaven will rejoice over your goodness, and Christ will be pleased with you. How is that not the ultimate gift?

Lazarus had tons to give out, just as Jesus, the ultimate beggar, has much to give out at His ultimate moment of ultimate begging: “I thirst.” He who receives Jesus in His ultimate humiliation receives the Father Himself. Or as the proverb says, bringing this back to Lazarus, “He who oppresses the poor reproaches his Maker,” which if true makes the converse true, “He who helps the poor helps his Maker,” which sounds an awful lot like what Jesus teaches as well. “He who receives you [the one I send out without food and clothing] receives Me.”

Lazarus lay at the gates as the gateway to heaven for those who would help him, for to help him was to serve the Lord. Meanwhile, the rich man had an opportunity to be the hand of God for Lazarus, to be that giver, reflecting the “Father” side of the giver/beggar binary. Instead, he showed his ultimate poverty.