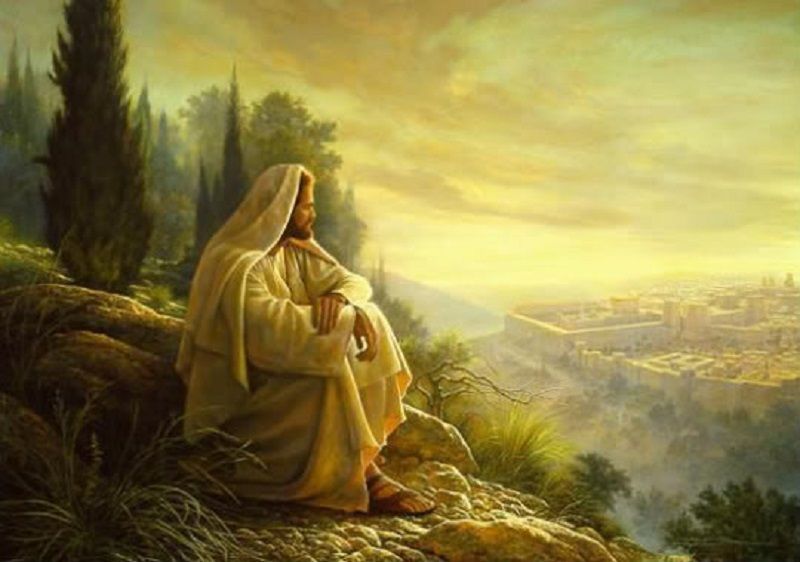 Now as He drew near, He saw the city and wept over it.

This week’s Gospel is very raw. It’s short. It’s poignant. It strips theology bare and gets to the heart of the Gospel. And not just the heart of the Gospel as understood in the obvious, in the reference to the “thing that make for your peace” and the “time of your visitation,” phrases we’ll soon meditate on.

It’s raw also in its presentation of the incarnation of Jesus. Jesus weeps over Jerusalem. Only two times is it recorded Jesus wept, here and when His friend Lazarus died. Everyone knows that moment – the shortest verse in the Bible. Many forget this one, when He wept over Jerusalem.

It makes you wonder. What was the nature of His weeping? Why did He weep? In the case of Lazarus, He knew He would raise him. In this case, was His weeping over Jerusalem far more profound, because though He would try to gather them in, they would not listen? Was He prophesying His own weeping about Jerusalem when He said, “And I say to you that many will come from east and west, and sit down with Abraham, Isaac, and Jacob in the kingdom of heaven. But the sons of the kingdom will be cast out into outer darkness. There will be weeping and gnashing of teeth.” Did He Himself, as a Jew, bear some of that weeping and gnashing of teeth?

Here’s another interesting detail speaking to the mystery of the incarnation. Jesus doesn’t start weeping until He arrives at Jerusalem and can look over it. That’s strange. Jesus is God. He’s well aware at all moments of the profound sadness of any given situation. Yet, here Jesus is triggered, by a sight, a sight of Jerusalem.

Of course, Jesus “emptied Himself” of His divinity, as Philippians 2 tells us, so though He could claim such divine perspectives on things, He submitted to the burdens of being human. And how wonderful is that. As the book of Hebrews tells us, “For we do not have a High Priest who cannot sympathize with our weaknesses, but was in all points tempted as we are, yet without sin.”

Jesus sees Jerusalem and weeps over it. He knew its future. He knew what was to happen to His people. Weeping is born from deep love, and Jesus certainly had that for His people; yes, these were His people He’d been nursing along since Abraham, for He is the Lord who appeared to Abraham. That’s the divinity at work – Jesus never emptied Himself of the divine capacity of love.

But still, it was the human sight of Jerusalem that triggered a very human reaction. Divine love conspired with human emotion to lay the foundation for this week’s Gospel. This is one of those week’s when one can only ponder how hard it must have been to be Jesus.