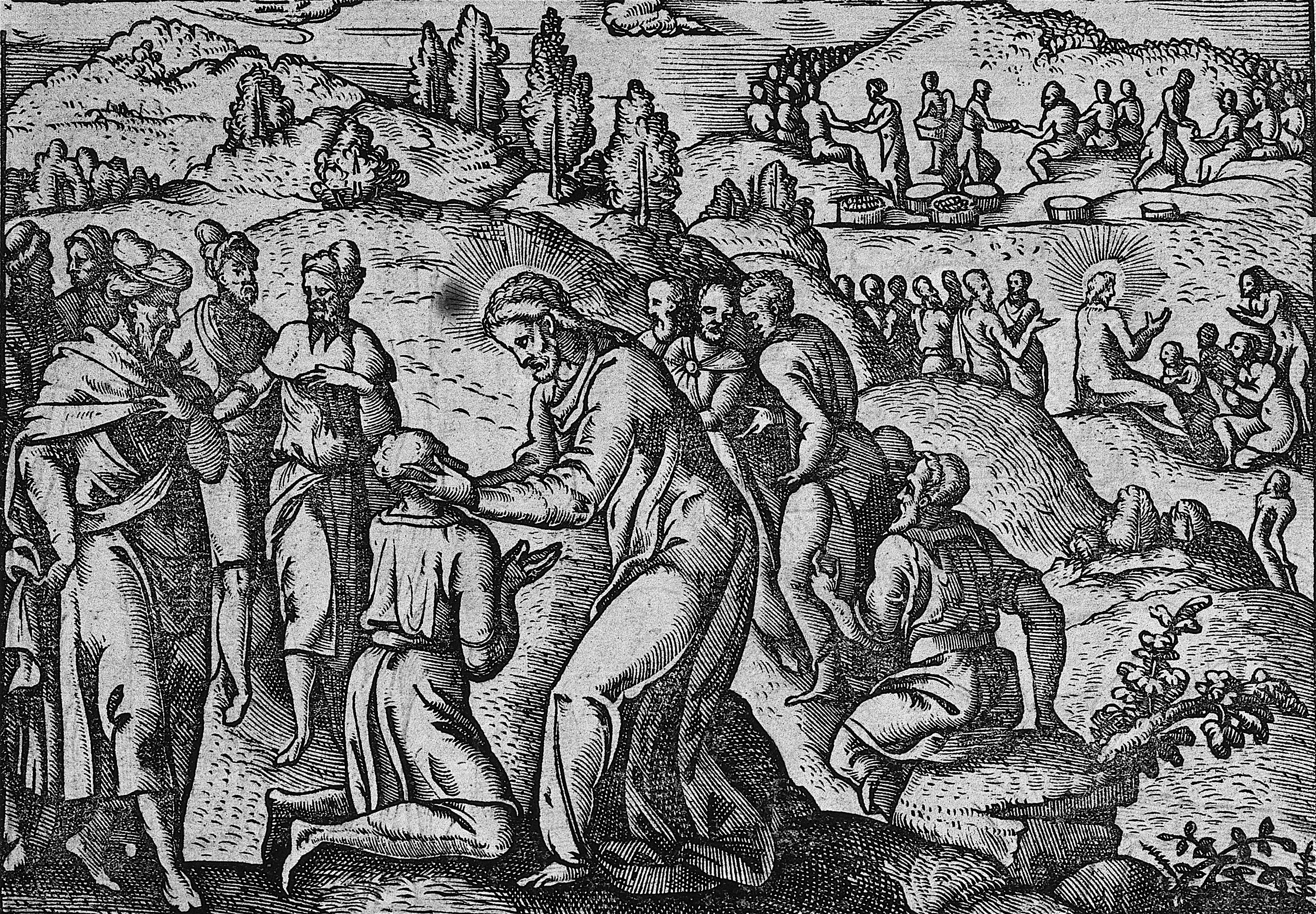 And He took him aside from the multitude, …

We commented in last devotion how, when the Lord separates something, He’s giving it life. This goes back to the first creation, when He separated the light from the darkness and gave each names.

This is a significant point in understanding the critique against Gnosticism. Separation is something that can only happen when there is divisible substance, or matter. I like the word “substance” better because than can include spirit, including God Himself (“of one substance with the Father”). Things of substance arising from the ultimate Substance (God) has parallels to the Logos being the source of all creation, all the things comprising the logoi. They are named, even as God is named.

The Ten Commandments are premised on this truth. God is substance, separate and unique from all others who would be claimed god – you shall have none other god than He. He has a name. He has a day. There are protected, substantial properties with clear boundaries – parents, our bodies, our property.

It is because of substantial things we have language. Without the divisibleness of substance, there could be no language. We learn this also from the creation account. “God called the light Day, and the darkness He called Night.” Words arise from the Word, as substances arise from Substance.

God’s separating of one thing from another is His sanctifying, even His glorifying. He’s separating something and giving it a calling: this is what this thing does, what it is, its glory.

With the fall, a new dynamic set in place. People began glorying in the collapse of substance into nothingness: “the glory of man as the flower of the grass. The grass withers, And its flower falls away…” They saw glory in themselves and their own words: “He who speaks from himself seeks his own glory.” It’s a false glory.

Not a single living thing today will likely be here, what, a thousand or two years from now? And that’s factoring in Redwood trees and the like. No animate living being will live beyond a few hundred years. The glory of the creation is to collapse into nothingness. Most modern philosophies attempt to build their systems on, or despite, this sad fact.

Why did the Lord take aside the deaf man from the multitude?

At one level, Jesus is setting the tone of what Church is. It is ecclesia, a Greek word meaning “called out.” We care called out of the world, out of the collapsing morass. Jesus is always calling out His people from the multitudes, is He not? “Come out of her, my people,” He says, “lest you share in her sins, and lest you receive of her plagues.” This from the book of Revelation, calling to His Church in the midst of Babylon.

To be called out is to be healed and given life, just as at the beginning, and just as Christ did with the deaf man. Church is the place of healing, where His Word heals our rebellious hearts, putting to death our Self and its words, laying the foundation for something that doesn’t wither away like grass, but is eternal and comes from God. “He that has ears to hear, let him hear” is an exorcism spoken on every ear, not just the physically deaf ones.

At another level, Jesus is playing out what is known as the “messianic secret” when He takes the deaf man aside from the multitude. He will heal the man; He will give a peak at His divine ability to create; but He will not cast pearls before swine.

What are swine in this context? It’s the “Your Best Life Now” crowd and its theology, the crowd trampling over to Jesus wanting to make Him king after He fed them (see John 6). It’s that element that seeks in Jesus an answer to their worldly problems, and who has no use for Him once they learn that to follow Him means taking up the cross.

Jesus knew the swine in people’s hearts, rooting around for the comforts of this world. He knew if they all saw Him heal the man, they’d want to freeze Him in that moment of His ministry, keeping Him from the cross. But a Christ without a cross is only a good doctor. Everything still ends up withering and collapsing. No, in the cross we glory, because only in the cross is the old world of Adam finally put to death, so that a new world can arise from the open tomb, in Christ.

In a sense, the Church is still a messianic secret. What happens in the Church is a mystery to those on the outside. We don’t cast these pearls before the swine. To those open to its message – the worthy – we preach, baptize, and invite into the sanctuary. To those on the outside – those not worthy – we allow the Word itself to drive them away, and leave it at that, shaking off our feet what they are destined to become, dust.

But typically when the Church loses its “other” and “separated” character, desperately seeking to find affinity with the world, yes, it allows the swine in, and the swine do what they are destined to do: “they trample [the pearls] under their feet, and turn and tear you in pieces.”

Jesus takes us aside from the multitude, to heal us. It’s what the Church is. He’s doing such things for a reason. He’s calling us out from the collapsing morass. He’s keeping us from the swine. He’s preserving us for the life He’s creating in us.