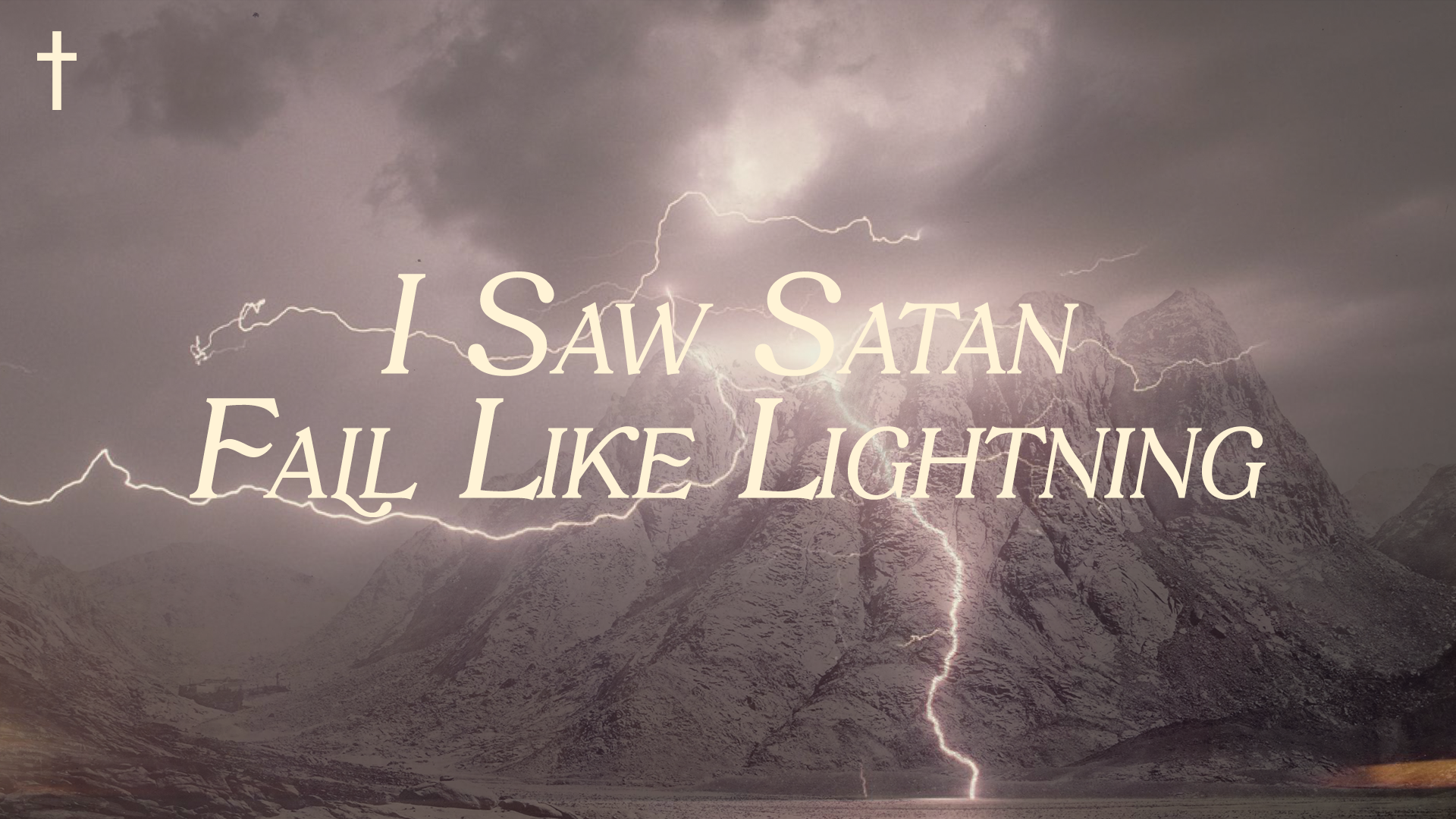 Then He turned to His disciples and said privately, “Blessed are the eyes which see the things you see; for I tell you that many prophets and kings have desired to see what you see, and have not seen it, and to hear what you hear, and have not heard it.”

The little passage beginning this week’s Gospel makes more sense with what precedes it than with what comes after. Jesus says these words after sending out the seventy, who come back rejoicing that the demons submitted to them. Jesus says He saw Satan falling like lightning from heaven, but then says the disciples should rejoice not that demons are subject to them, but that their names are written in heaven.

Jesus then prays to the Father: “I thank You, Father, Lord of heaven and earth, that You have hidden these things from the wise and prudent and revealed them to babes. Even so, Father, for so it seemed good in Your sight. All things have been delivered to Me by My Father, and no one knows who the Son is except the Father, and who the Father is except the Son, and the one to whom the Son wills to reveal Him.”

Here we get a thread of a link to what follows in the parable of the good Samaritan, which perhaps we can follow. The Gospel is hidden from the wise and prudent, like the lawyer, but revealed to babes, like the disciples and those who receive their message.

The disciples, the babes, were the ones to whom Jesus willed to reveal the Father, and therefore to whom the Father revealed “these things,” that is, the fall of Satan’s kingdom. Even the Old Testament kings and prophets did not get this blessing. This gets to a theme coming up in several places in the New Testament, that the Gospel was veiled in the Old Testament, a hidden mystery.

Imagine being Moses, knowing of another prophet to come, but not knowing who. Imagine King David, receiving inspirations about the cross in type, without a full clue of what it all meant. Or imagine Isaiah hearing of a suffering servant who would save Israel. What did it all mean? The greats of the Old Testament ached to know what it all meant, but that knowledge was reserved for humble fishermen and the like, the disciples, the babes relatively speaking.

The lawyer, after all, represents the “wise and prudent” scholars of Old Testament law. Unlike prophets and kings (like David), who desired to know what the mystery was – who therefore longed for Christ without really knowing what this meant – the lawyer was content to settle on Old Testament law as it was. This meant getting pedantic about it: who is my neighbor? What are the limits of the law in terms of whom I’m forced to love?

Jesus gives the lawyer his world, a world where his ideas on the law rule, and that leaves an injured man on the side of the road, passed over by the priest and Levite because he looked unclean, possibly dead. That “ruling principle” gets toppled, however, like lightning from heaven, when Jesus introduces the Samaritan, the one who’s willing to risk becoming unclean in order to have mercy. When the lawyer is placed in the world of his own making – with those demonic ruling powers – as the injured character, he’ll take the merciful one any day of the week.

It’s not that the Old Testament Law is “demonic ruling powers,” but that the way it was understood by the Jewish scholars became demonic. Jesus, after all, called the Jews a “synagogue of Satan.” And consider how this passage from St. Paul fits our theme for today: “But we speak the wisdom of God in a mystery, the hidden wisdom which God ordained before the ages for our glory, which none of the rulers of this age knew; for had they known, they would not have crucified the Lord of glory.” The “rulers of this age” – which are the demons – were the ones who crucified the Lord, including Jews and Romans. (See also, John 14: 30, “I will no longer talk much with you, for the ruler of this world is coming, and he has nothing in Me.”)

Or again, consider this passage from Colossians: “So let no one judge you in food or in drink, or regarding a festival or a new moon or sabbaths, which are a shadow of things to come, but the substance is of Christ. …[I]f you died with Christ from the basic principles of the world, why, as though living in the world, do you subject yourselves to regulations – ‘Do not touch, do not taste, do not handle, …’ ”

Whereas the ones desiring to see and hear what the disciples did – the prophets and kings – understood they were in the shadows at the time, but truly wished to see the dawning light, the lawyer types were content in the shadows. They were obsessed, like the priest and Levite, with rules like “Do not touch or handle” a corpse, for instance. Hence, their crossing the road away from the half dead man. They were obsessed with pedantry like, “Who really is my neighbor?”

That’s demonic, and needs to be toppled down.

It becomes toppled with the knowledge that the substance of the shadow is Christ, Christ crucified. If that’s the case, then mercy always reigns. And this the Samaritan represents. This truth came crashing in on the lawyer like lightning falling from the heavens. His previously held opinion about who his neighbor was changed on a dime to including the dirty Samaritans. Think of that!

One has to wonder whether the lawyer went away and did as Jesus said, “doing likewise.” He, after all, did change course in his thinking, answering correctly that the Samaritan was the true neighbor. We assume the “bad guys” in the narrative – those, for instance, who are out to “get” Jesus with their little tests – remain bad. But Jesus was a “toppler” of arguments, in the spirit of St. Paul’s words, “For the weapons of our warfare are not carnal but mighty in God for pulling down strongholds, casting down arguments and every high thing that exalts itself against the knowledge of God, bringing every thought into captivity to the obedience of Christ.”

This passage, in fact, helps us understand the bridge between the mission of the seventy and the parable of the good Samaritan. The “ruling principles” (Satan, demons, false Old Testament theology) were the strongholds of arguments exalted against the true knowledge of God (revealed only in Christ to babes, by His will); Jesus casts down these strongholds, arguments, and thoughts, and down they come like lightning, in obedience to Him, even as the lawyer ends up answering correctly about who was the neighbor. What the disciples did in the preceding passage Jesus does with the lawyer in this parable.

What sorts of strongholds is the Lord casting down in our minds? What sorts of “lightning” strikes are going on? They surely happen, and when they do, blessed are those eyes which see it.