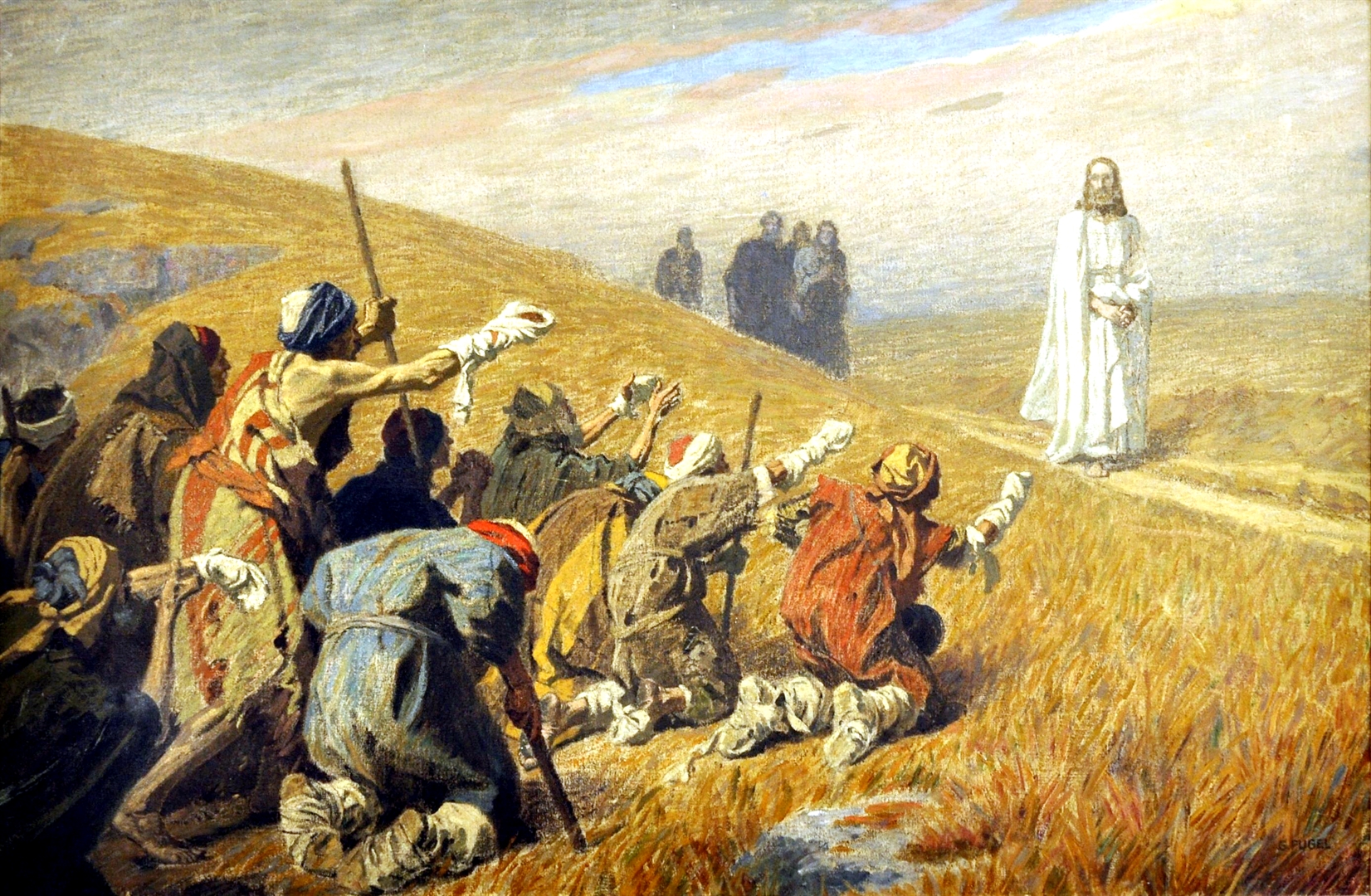 Now it happened as He went to Jerusalem that He passed through the midst of Samaria and Galilee. Then as He entered a certain village, there met Him ten men who were lepers, who stood afar off.

Leviticus 13 gives the guidelines of the Law regarding how to diagnose a leper. Leviticus 14 describes how a leper might be declared clean again. There are two dimensions of uncleanliness. First is the physical, health dimension – Leviticus 13 gets extremely graphic about diagnosing skin diseases, talking about raw flesh and subcutaneous infections and whatnot. Second is the spiritual dimension, for in Leviticus 14, the leper must offer a sin offering for atonement in order to be finally declared clean.

This is all good information providing background for all the events which conspire in our Gospel for this week. The meditation for today’s passage, however, focuses on a few select regulations, the first from Leviticus, the second from Numbers:

Command the children of Israel that they put out of the camp every leper, everyone who has a discharge, and whoever becomes defiled by a corpse.

Thus, the ten lepers were “afar off” because that’s where the Law put them. They were outside the community, even the community of faith. They were physically infected and contagious, but as we see above, also spiritually unclean.

What a powerful image commenting on the nature of sin! Sin is contagion. Sin has an effect on the physical body, which can transmit from one to the next.

It’s not that the lepers per se were extra sinful. It’s rather that their leprosy manifested the sin all of us have in ways unacceptable to the community of faith. The community of faith is a type of restored Eden, quite frankly, and so, if we may be a bit crude, has certain appearances to keep up. That is the nature of types. A type is ultimately a shadow, an insufficient forecasting of a greater fulfillment to come. A year old lamb, for instance, is just as part of the falling creation as anything – it will die. But as a type, a prophecy of the spotless Son of God, it had certain appearances to keep up.

So also the leper. Someone without leprosy represented a “clean” person, one forgiven of sin. A leper, by contrast, was a type of the one experiencing eternal death, whose “worm does not die.” Again, this is all at the appearance level. Even the “clean” person atoned for by the sacrificial lamb wasn’t truly taken care of, until Christ. Hebrews 10 really emphasizes this, particularly with this verse: “For it is not possible that the blood of bulls and goats could take away sins.” And again, “this Man [Christ] …offered one sacrifice for sins forever.”

Everything is in type, in appearance, as a public testimony of things to come. But the fact that it’s a public testimony underscores the important connection between the physical and spiritual. What was the Lord teaching, even if by type or appearance, by casting the leper out of the community? In a sense it was a replay of Adam and Eve – under the skin-falling-apart curse of “dust to dust” – being cast out of Eden.

And it’s ultimately a type of hell, being cast from the presence of God. Christ bore this curse by Himself being cast out of the community at Calvary, abandoned by God. Those who believe in Him – whose faith makes them well – will exchange their ostracism from the community with Him, gaining His right of access to the heart of the community, at the right hand of God.

But there’s another level of interpretation, and that has to do with the contagious effects of sin. Why the separation? Why the distance from holy things? Not only is it because God wants nothing to do with death, Him being a God of life, but to protect the community from evils.

The Bible repeatedly teaches that tolerated sin has a contagious effect. And interestingly, just as there was an “appearance” thing going on with the leper – insofar as we are all lepers – there is a parallel with sin as well. We use the expression, “open and unrepentant” as a tribute to this “appearance” factor. Everyone who lusts is an adulterer, but only the adulterer who lives in open and unrepentant sin is under church discipline. How is that fair? Well, how is it fair that only lepers are cast out, when everyone living is actually falling apart?

But the difference between the “open and unrepentant” sinner and the “keep up appearances” sinner is perhaps one of humility. Open and unrepentant sinners may recognize what they do as sin, but they don’t care; there’s a certain amount of pride going on. “Keep up appearances” sinners recognize the effect their sin will have on the community, so they keep their sin under wraps.

The open and unrepentant sinner parallels the leper, whose sin in a sense becomes subcutaneous. It’s not just a passing infection, but part of him. And it becomes contagious. It can threaten to corrupt the whole body. Again, the Bible is clear about the dangers of this situation, which is why it teaches church discipline, excommunication, staying separate from open rebels, and being careful with the company you keep.

As Jesus teaches, if a hand or eye causes an sin in the body, it should be cut off. It’s a leprosy of the spirit. Or as the wisdom of the Old Testament teaches, bad company can effect good character. Or as Revelation says, “Separate from Babylon, my people!” Over and over it goes.

There are spiritual lepers, open and unrepentant sinners. The Church – the community of God – is to keep them separate from her midst. This is for the good of the body. Their very proximity to the believer can have a negative effect. Of course, with the ubiquity of screens on every wall and in every hand, the leper is now brought in extreme and immediate proximity. What contagious effect will this have on souls? I think we know the answer to that.