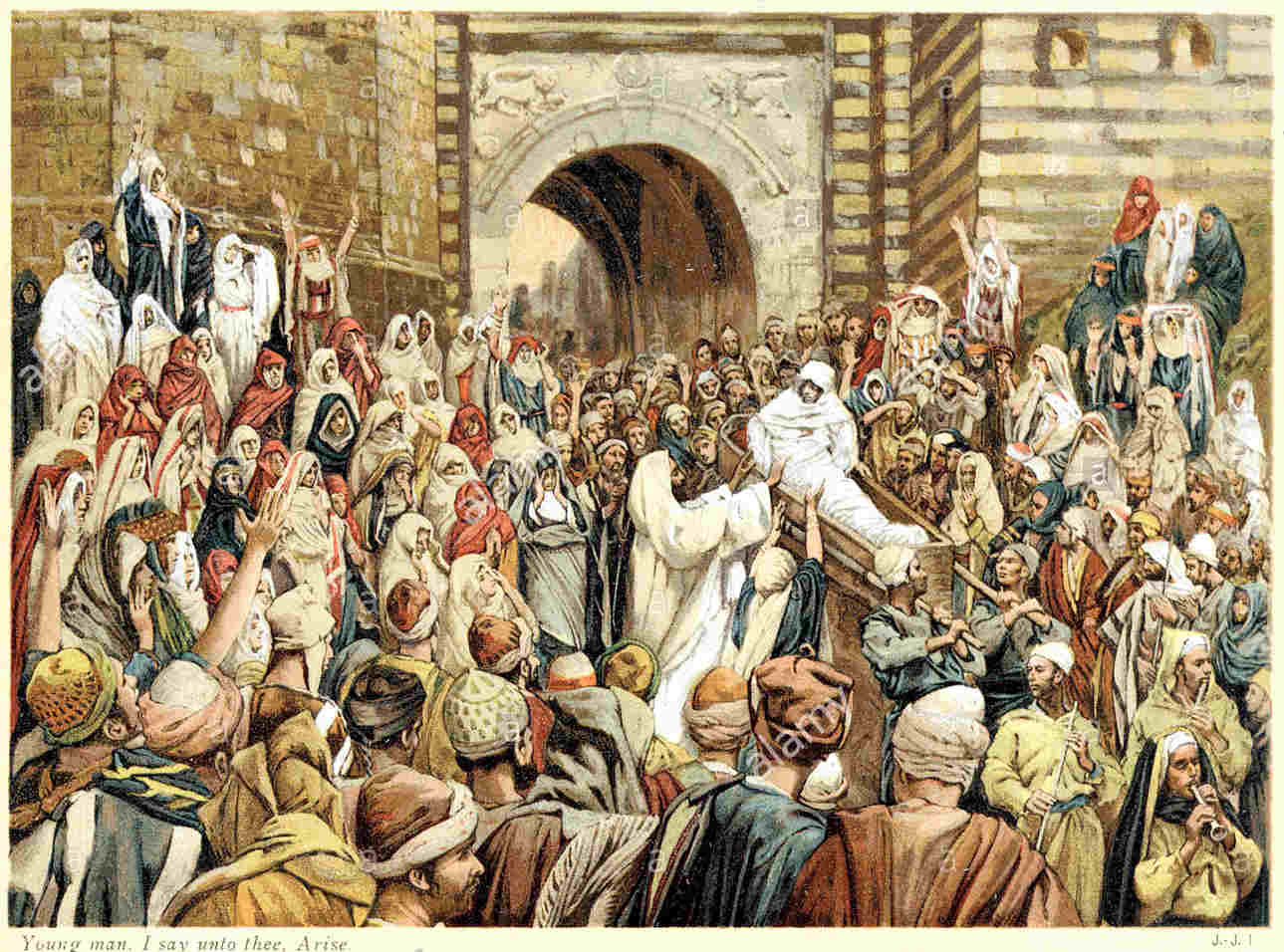 Now it happened, the day after, that He went into a city called Nain; and many of His disciples went with Him, and a large crowd. And when He came near the gate of the city, behold, a dead man was being carried out, the only son of his mother; and she was a widow. And a large crowd from the city was with her.

Clearly there’s am image St. Luke is setting up by the two references to a “large crowd.” One crowd follows Jesus; it’s “many of His disciples.” Recall, Luke reveals how Jesus sent out seventy disciples to preach the Gospel. How big was this crowd here? 50-70? That’s a large enough crowd.

Another crowd follows the coffin with the woman. They were mourning the child’s death and supporting the widow. As touching and compassionate as this crowd was, it lives, as it were, in another world than the first crowd.

We’ve pointed out especially in these past several weeks how the Gospels from Luke seem to be working out the theme of clash between two worlds, the one world of the Law and the other world of the Gospel.

In the parable of the good Samaritan, we begin in the lawyer’s world: “What must I do to inherit life? Follow the Law. What does this mean?” Then we get the parable. The Levite and priest, both creatures of the Law world, avoid what appears to them a dead body. Why? Because that would make them unclean. That’s old world thinking, not so much on account of the Law, but on account of their abuse of the Law, their losing sight of its merciful intent, for the Lord desires mercy, not sacrifice. Jesus not only had to remind them of this, but also fulfill the Law. This He does by revealing the good Samaritan, who risked becoming unclean for the sake of mercy.

In the account of the ten lepers, we begin in the world of the Law again. Lepers are outside the city gates, and to be readmitted into the city, the priest had to declare them clean. So Jesus sends them to the priest, knowing He’d clean them. As they get healed, the nine remained in the Law world, continuing to the priest as understood in Old Testament Law. But the one Samaritan went to the true Priest, Jesus, to be declared truly clean. He had entered into a new world, the world of the New Testament.

In this week’s Gospel, we get a similar dynamic. There’s the pretense of the account, the boy’s death. The Law had strict rules about what was to happen to him, that is, his body. As it says in Numbers, “Command the children of Israel that they put out of the camp every leper, everyone who has a discharge, and whoever becomes defiled by a corpse.”

Those handling the corpse would need to do so outside the city gates, where they could “work off” their unclean-ness. Like outside Eden’s gates, like outside of heaven, and like hell ultimately, this is where our sins place us, outside the gates of the city, outside of the community of God. It’s the place of death, and the Lord has nothing to do with death. He is a God of life.

But the arrival of Christ would change all that. He is the substance of the shadows, the antitype of the type. And that’s what we get when the new crowed comes in. Here again, we see the new world overturning the old one, the new crowd of joy following life overtaking the old crowd of sadness following death.

Note, the Lord “went into” the city of Nain. He came to the world of death. He came on account of His compassion. That’s why He came into our world, to overcome darkness and death. He came to fulfill what the Old Testament was pointing to.

And note the new worship His advent would inspire, which parallels much of what we got a few weeks ago with the ten lepers. The people glorify God and recognize in Jesus the presence of God. They confess the incarnation and the Holy Trinity, giving glory to Him.

This world continues today through the holy liturgy, where similarly we enter into the Lord’s new world and bear witness to His divinity, and give glory to Him. And similarly, He touches us, taking our unclean-ness and overcoming it with His mercy, incarnation, life, and forgiveness.