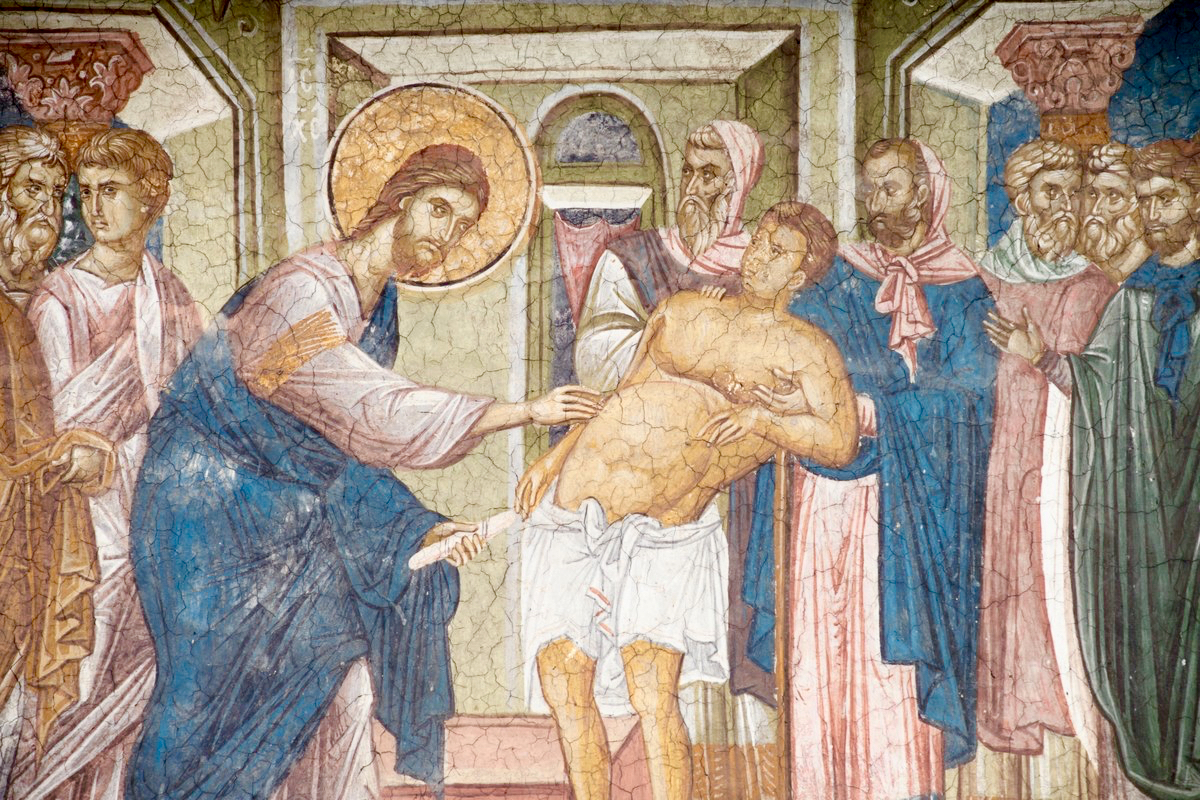 The Gospel for this week begins with this brief comment, “Now when one of those who sat at the table with Him heard these things, he said to Him, ‘Blessed is he who shall eat bread in the kingdom of God!’ ”

That sets up Jesus’ parable of the great banquet, teaching who exactly those blessed are. But what things did the one who said these words hear Jesus say, that prompted those words?

Jesus taught the parable of the great banquet on the Sabbath. Jesus was eating bread with the Pharisees, having been invited, and they were “watching Him closely.” It was here where a man with dropsy came up to Jesus, and Jesus asked them whether it were lawful for Him to heal on the Sabbath or not. Of course it was lawful, as Jesus teaches by His analogy of the man who had a donkey or ox who fell into a pit on the Sabbath, so Jesus heals the man with dropsy.

Jesus would “lift up the broken.” (And He lays down the prophetic teaching that, it is good for one to go into the pit on the Sabbath to lift up those who belong to him who have fallen, which is exactly what Jesus did on the Sabbath day after His death when He descended into Hades, or the grave.)

Then Jesus teaches that those invited to a feast should not seek out the best places, but wait to be invited to a higher spot. Now, the man with dropsy was one such person who was not exactly “invited” to the Pharisee’s table (like the rich man not “inviting” Lazarus to his table) – being excluded from it because of their interpretation of the Law. But Jesus lifted Him up, inviting him to his table, so to speak. He invited the humble to a higher spot.

Amplifying this point, He goes back to the table theme, teaching those who invited Him that, when they invite someone, they shouldn’t just invite those who will invite them back one day, but rather invite the poor, the maimed, the lame, and the blind. Such men as the man with dropsy.

The irony of this whole section is, Jesus was invited! So, Jesus says to those who invited Him, “You shouldn’t just invite those who will pay you back one day. Rather, you should invite guys like this man with dropsy.”

So which one was Jesus, the one who could repay or the poor, maimed, lame, and blind? Isn’t that an interesting question!

Likely the people inviting Jesus had some feeling that Jesus might truly be the Messiah. Perhaps they were hedging their bets. This chapter in Luke along with some other passages in his Gospel suggests the Pharisees were not complete enemies, but perhaps wondered if He were the one. Just prior to this chapter, for instance, some Pharisees warned Jesus about Herod.

If that’s the case, then their motives for inviting Jesus were wrong, Jesus says. They were merely hoping that by inviting Him, perhaps one day when He came into His kingdom (earthly kingdom), He would reward them and invite them to His table. At this point, the Pharisees seemed to see Jesus as the new kid in town, the flavor of the day. It’s always good to be associated with up-and-comers.

Instead, they should have been inviting the likes of the man with dropsy. And lurking in the background is Jesus’ teaching about the Law, of course. The “table fellowship” of their teaching should be directed toward those who are fallen and rely completely on the grace of others.

The irony, again, is that Jesus was in fact to become the poor, maimed, lame, and blind, on the cross. Meaning, Jesus was going to do nothing for those who invited Him. Not in this life. In this life would only be the cross. Jesus is foreshadowing the reality. Soon these Pharisees would have to decide whether they would go the way of earthly endowments and honors, of helping each other and keeping others away from their table who could not help them, or whether they’d receive the poor, maimed, lame, and blind of the world – the gentiles, the broken disciples, the new Christians following their crucified Jesus.

Who was it that said, “Blessed is he who shall eat bread in the kingdom of God!” Jesus makes no specific comment on this man, like He did to the woman who blessed Mary’s womb and breasts. The man could have been a Pharisee toasting something everyone could agree on – perhaps he sensed the exchange was getting heated and wanted to bring conviviality back to the feast.

Whatever it was, it was an obviously true statement, and Jesus used the statement to explain exactly who belonged among those eating bread in God’s kingdom. It should be men like the man with dropsy, people who can only be given to. In other words, those who administer the table had better make it a place of grace.