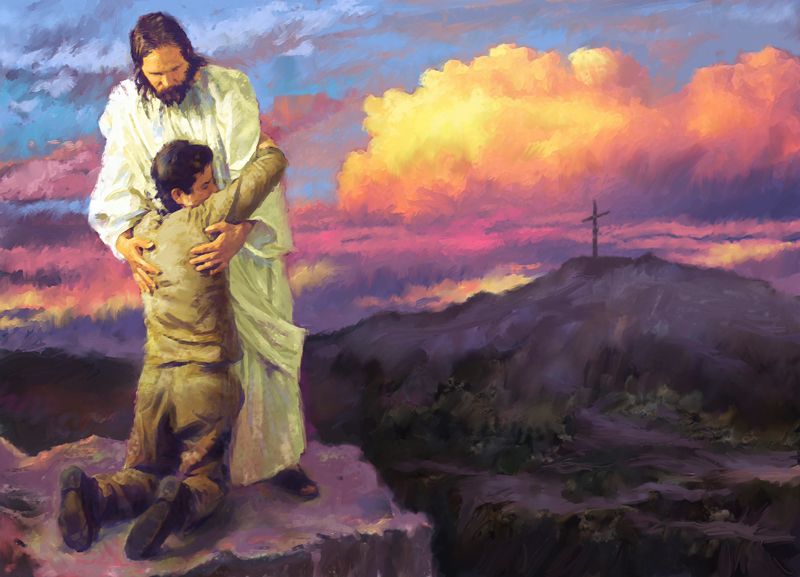 Then all the tax collectors and the sinners drew near to Him to hear Him. And the Pharisees and scribes complained, saying, “This Man receives sinners and eats with them.”

This passage from this week’s Gospel sets up the entire context of the three parables He tells. Few words better describe what it means to be a Christian. Sinners draw near to Jesus, to hear Him, to eat with Him, and He receives them.

But if you follow the rest of the parables, the “sinners” in these parables are a lost sheep, a lost coin, and a lost son. Coins especially but even sheep do very little in the way of personal self-evaluation and introspection. The son, meanwhile, did “come to himself,” which suggests some self-awareness. But the actions which follow show misguided behavior. In any event whatever was going on in his mind was completely disregarded by the father.

What then is a sinner? Perhaps we should define it not subjectively, but objectively, that is, it’s someone who is the object of Jesus’ mission. Jesus defines sinners; sinners do not define themselves. And Jesus defines sinners as those He receives. By implication, it’s also those who do not reject this reception. Lots of “sinners” (in an abstract sense) will go all over the world to deal with their sin – self-help gurus, therapists, books, groups, or Jesus falsely understood (that’s the scary one!). Real sinners are those received by Jesus correctly understood.

I think an interesting question Christians should out of curiosity start asking others – particularly their lapsed acquaintances and relatives – is, “Do you believe you’re a sinner?” I think how that question is answered will reveal way more than “Do you believe in God?” or even “Do you believe in Jesus?” Everyone believes in God and everyone likes Jesus. But only sinners truly understand and know Jesus, for He is their friend.

The next phrase, “draw near” might suggest some sort of willful involvement of the sinner to come to Jesus, some psychological self-awareness. Yet, whatever powers are suggested in the sinners insofar as they “drew near” to Jesus, Jesus Himself deflates that power by the analogies he pins to them: sheep, coins, an ignorant son. Sheep are dumb animals who easily get lost. Coins do nothing to get lost. And the son wasn’t thinking clearly. Three totally different ways of ending up at that place of “being found.”

But the bigger and subtler point is that there is indeed movement from one to another. It’s like the Holy Spirit hovering over the waters and drawing the land out of the waters so as to create land and seas. At first there was just a hodgepodge of earth mixed with waters – chaos and void. His action drew the earth out of the waters. There was movement. There was separation. That is what the “Holy” Spirit does, He separates one thing from another.

Jesus was doing the same thing. He was drawing sinners to Himself. He’s separating them from the world. He didn’t come for the righteous. There’s a movement going on, and where it’s going to is to Jesus, the only Savior, the God in flesh. The Gnostics would say there need not be movement going on, because movement suggests spatial relationships, which can only occur in a material realm. They’d say you just have to “ascend” out of this shadow world of delusion into the realm of light, and that this all happens internally or psychologically. In the Gospel, as well as in the Church, however, there is indeed spacial movement going on. The sinner goes from one spatial location to another: whatever dark nook he’s wandered in, whatever dusty corner he’s fallen in, or whatever pig slop he’s lying in…to Jesus.

The next line helps: “to hear Jesus.” Sinners drew near to Jesus to hear Him. His Word drew sinners to Himself. His Word was what flowed out into the highways and hedges seeking the poor, the maimed, the lame, and the blind. It may have been the woman saying, “Come, see a Man who told me all things that I ever did. Could this be the Christ?” It may have been crowds who were “the people were astonished at His teaching, for He taught them as one having authority, and not as the scribes.” Whatever it was, His Word was going forth and seeking sinners, to bring them to Himself, like a groom seeking His bride. As Isaiah says, “And as the bridegroom rejoices over the bride, So shall your God rejoice over you.”

But the foundation of Jesus’ ministry set up this marriage. The waters of the Jordan was where sinner and Jesus first met, where they were first introduced to one another. John had preached, “Repent and be baptized,” which amounted to saying, “Draw near to the Jordan – get over here – and here in that same Jordan you’ll find the one whom sinners need. You’ll find your husband.” So sinners go there. After that, Jesus opens His mouth and teaches the ins and outs of what this “sinner-Jesus” relationship means.

And it all culminates at the table, for as the Pharisees observed, not only did Jesus receive sinners, but He ate with them. Of course this brings up the Lord’s Supper, which is exactly what the Lord was receiving them to, His supper, and where He still receives sinners.