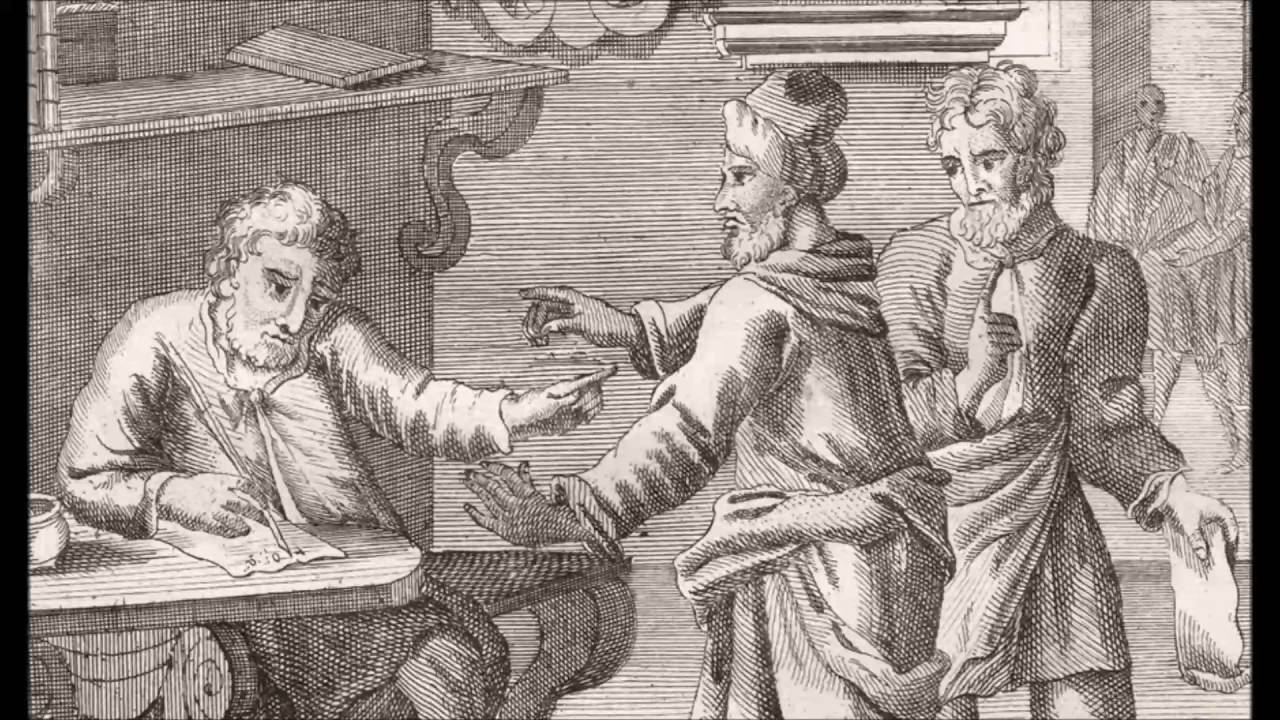 Sometimes I like to dub this Sunday, “Hardest Gospel of the Year Sunday.” It’s just a strange Gospel. It has lots of seemingly disconnected thoughts. It articulates odd ethical teachings, like “Make friends by unrighteous mammon.” It has an element of worldliness uncharacteristic of Jesus.

Yet, even if no whole seems to be able to be assembled from the various parts, still, it has several various parts that in themselves are quite strong and profound. It’s like we’re given a pile of parts with no directions: most of the parts make sense, but the few that don’t, combined with the lack of directions, leaves us confused. Perhaps if we put together the parts we can make sense of, we can see where the missing gaps are, and fill in the more confusing details. Let’s do this.

We begin with the moment of accountability. The steward was wasting the rich man’s goods; an accusation is brought against him; he is called to account. We know Jesus is assigning eschatological meaning to this accounting, because later He talks about being received into “eternal homes.” So, whatever the parable is about, it’s talking about the final judgment and the placement of the judged afterwards.

What were the goods? What does wasting these goods mean? Who is the steward? Answers to these questions will remain for the moment, but at least we can conclude that the rich man is most likely God, the judge of us all.

Based on that premise, we get some direction about what made the shrewd steward shrewd and someone to emulate. When confronted with judgment day, he began to think about things. That’s actually a huge point to consider, for how many people know death awaits them, but they don’t think one bit about how they’re going to face their Maker?

But not the shrewd steward. This in turn invites some other texts to play. Jesus says, “Seek, and you will find.” Jesus lauds the woman who used His words “against Him” in order to get grace. Israel means “wrestle with God.” Is there an element to our faith whereby we “strive” almost “against God” for our salvation? God is a judge. Goodness, this is a terrifying thought and none of us is worthy. Don’t we all have start getting crafty with how we plan on slipping through into heaven?

I’ve done funeral sermons where I’ve felt like I was battling for the person’s soul, throwing everything up from God’s Word building a case to have confidence in his eternal home. You get quite crafty doing so! Crumbs falling from the master’s table! That’s a strange argument to make for God changing historical course and including the gentiles into His plan, as if salvation history turns on the dime of a woman’s witty repartee. But in a sense, we do this all the time, don’t we? I’m not going to hell, so whatever the Gospel is, it’s expansive enough to include me. And watch me as I build the case to make that so. Crafty. Shrewd.

And Jesus praises that.

By way of analogy that actually kills two birds with one stone as far as this parable is concerned, I’m reminded of our meditation on the Parable of the Sower. Jesus told the disciples that to them it had been given to know, but to others, they would not understand. Yet, after telling the parable, Jesus had to rebuke the disciples for not understanding. What was the difference between the Pharisees who did not understand and the disciples who did not understand? The difference, we concluded, was that the disciples stuck with Jesus. Jesus eventually explained it to them. They did what Jesus bade them to do: they followed Him. They took up a cross that included confusing parables, denials, small faith, doubts, sleeping faith, and all sorts of other spiritual struggles. But yet they got up every day and followed Jesus.

So on one hand, as far as this parable is concerned, we just have to stick with it until we “get it,” which will likely be our whole lives. Sticking with Jesus isn’t a bad thing, is it.

On the other hand, in a sense, the shrewd steward reflects this attitude. When confronted with his day of accountability, he didn’t plot a rebellion; he didn’t re-frame reality. No, he wrestled with the realities as given. Within the framework of the universe in which he was situated – a universe created by the rich man – he was going to succeed. He was going to struggle with that reality.

So what does he do?

So, how does the shrewd steward have the power to cut the debt of sin – which is absolution – in half? What stewards of God have the power of absolution to cut a debt in half? And furthermore, what sort of situation exists in which a steward giving forgiveness to another results in the forgiven having the power to grant him into their eternal homes?

Well, we have some parallels here from other parts of the Gospel. Jesus does teach, “Forgive, and you will be forgiven.” Jesus also teaches His stewards that they’d better be about forgiveness, and that if they aren’t, this will be paid back to them on judgment day. And as to the debtors judging the steward, we have some parallel in that the saints will judge the earth.

We also have scriptural texts that say, if we give to the poor, we lend to God, and He will pay back. So, if we expand the meaning of “debtor” to include those who are simply poor, we can invite new theological concepts to play, for instance Jesus’ words on Judgment Day that whatever you do to the least of these his brethren, you do to him.

On these terms, the debtors are Jesus, which is also supported by the fact that Jesus bore our debt of sin. To receive Jesus as He comes to us in His sin-laden, impoverished, hungry, thirsty, imprisoned, indebtedness, weakness is to set ourselves up for entrance to our eternal home.

Make friends for yourselves by unrighteous mammon. Huh? But here again, at the “micro” level we can extrapolate some truths, while still being foggy at the “macro” level.

For instance, there’s the idea that, when faced with his pending judgment, the shrewd steward’s thoughts were directed toward debtors. He didn’t run to the rich or the powerful. He ran to the debtors. This certainly reflects a teaching whose Teacher directs our thoughts to the poor widow, the impoverished, and who Himself didn’t have a place to lay His head. Theologically, the church driven by eschatological urgency will more shrewdly run to the debtors and poor than they will run to the “health and wealth” Gospel.

Or again, there’s the idea that Jesus is the “friend of sinners (debtors).” So, when Jesus says, “make friends for yourself by unrighteous mammon,” perhaps He’s revealing His own character a bit. He befriended debtors. But did He do it by “unrighteous mammon”? Kind of, I guess. Our salvation is sort of God “cooking the books,” is it not? The devil thinks he’s got us with his accusations of our debt; but then God puts forward Jesus the debt-forgiver into the equation and that takes care of everything.

Then Jesus extrapolates from this mundane parable about unrighteous mammon into higher “true riches.” He teaches that those who are not faithful in the smaller issues of dealing with mammon will not be entrusted with true – presumably spiritual – riches.

How, again, were we supposed to be faithful in smaller issues dealing with mammon? By forgiving debt. By being generous. By giving to the debtors. The heart dealt with generously will be generous, or so seems to be the teaching lurking in the background here. Those generous at the level of mammon will be generous at the level of “true riches,” which are forgiveness, life, salvation, and all the administration of the gifts of the Holy Spirit.

Here, we begin to get something of a hint of a “macro” theme. Jesus is talking about generosity – forgiving debt to a radical degree. That’s what it means to be faithful. Faithful doesn’t mean stingy. Faithful means being forgiving, even if it looks sketchy.

The commentators all focus on the rich man and his character. The steward couldn’t execute his plan, they claim, without assuming a certain generosity of the rich man. That’s certainly true and should be remembered as well.

For, how else could cutting debt be classified as “being faithful with another man’s riches” unless the rich man was in fact himself generous?

Finally, Jesus concludes with the statement, “You cannot serve God and mammon.” In Matthew, Jesus says these words in the context of teaching about worry. Here, obviously, it’s a different context. But it actually might be the capstone of a strange passage that brings clarity.

What are the “rules” of mammon, that we cannot serve? Are they not the rules of limitation, scarcity, and measurableness? Money is always a measure of something, the delineation of limitation in a world of scarce resources. “You owe this debt. Pay up.” The shrewd steward shatters the rules, and he does so based on what his understanding of the character of the rich man. He knows the rich man will not go back and undo the steward’s debt forgiveness program.

At a minimum, that is one thing we can extrapolate from this Gospel at the macro level. There is an assumption of generosity going on. Cutting debt is a generous thing. It leads to joy. The fact that the rich man praises the shrewd steward for his shrewdness shows us he’s in on the act, the generosity act.

And if that’s all we get from this Gospel, that’s not a bad thing. Our Lord is generous. He’s a debt forgiver. At least He supports debt-forgiveness. That’s good for me, because I have some debts!