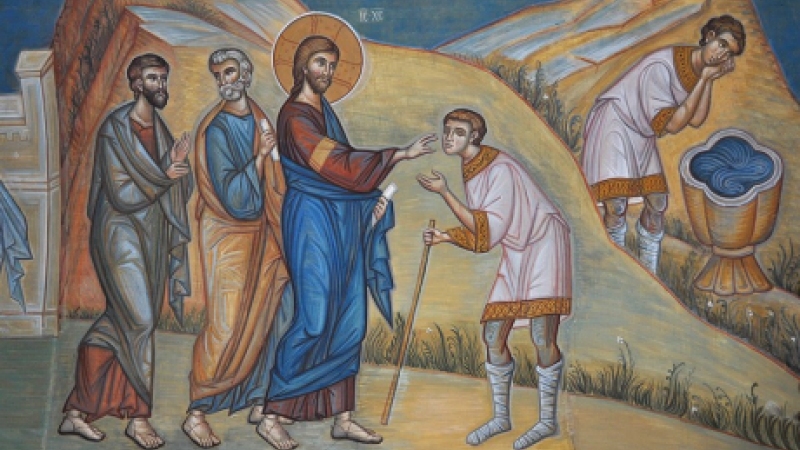 When I first began this project of daily meditation on the Gospels for the historic lectionary, I thought very quickly I’d run out of things to say.  This is only a problem when Christ is reduced to a simple, abstracted narrative devoid of the humanity into which He came. The mysteries of human life and human society are never exhausted, and so shouldn’t Christ’s human life in our human world be exhausted either.  But if Christ is reduced to a narrative formula, how quickly to exhaust Who He is beyond a few slogans.

Let’s look into this idea of “narrative” for a moment.  Narrative is one of the great soul-crushing, non-life-affirming, anti-human specters of our day. What is narrative? It’s the fitting of a human life to an abstracted structure crafted by the mind of an author. It reduces the human person to a “character” in an abstract system.

The author could be a philosopher, like Karl Marx, setting up his system of dialectic materialism and placing all of us as characters in his story. Those who become “woke” to his narrative are on the right side of history; those who don’t have false consciousness, not knowing what’s best for them.

So, for instance, a housewife may be happy, healthy, filled with joy making pies, being with her children, and washing her husband’s clothes, but according to the feminist narrative, she doesn’t know she’s in bondage to a patriarchal system. She doesn’t know she’d be happier sitting in a cubicle, getting calls from the daycare about her toddler’s illness, pushing papers, and spending two hours a day in rush hour. She has false consciousness.

Our culture’s obsession with race, gender, and sexuality is nothing less than an attempt to draw focus away from the truly human and reduce real humans to two-dimensional images fitted according to whatever narrative the “authors” of society have crafted. For, what is our identity-obsession but a project to understand one another based on not on the real stuff that makes up a person – his experiences, his history, his thinking, his beliefs – but on a phantasm generated from his identity-projection. Potential for real human relations and contact is cut off at the skin. How sad.

Narrative is a myth begot by our unwavering belief in the validity of social science, the idea that people can be reduced with mathematical precision to a specific predetermined character. If they act “against character,” that is a matter not of simply being human, but of false consciousness or unwokeness.  How many bad movies are full of these two-dimensional characters?  How often is our media framed in the stark black/white narrative formula characteristic of the Manichaean (Gnostic) mind.  Trump-Bad vs. Woke-Good!  Which character are you in that mythological psychodrama?

Due to the dominance of mass media in our society, we are in a “narrative moment” culturally. Our Facebook posts, Tweets, and texts all present a narrative of who we are, with all the virtue signalling and carefully managed image-making that requires. We’ve become estranged from our humanity and the real world as we become experts at the art of crafting a narrative of who we are. It’s not real.

Jesus is the Word who became flesh. By this act God signaled the end of abstractions and systems and the beginning of something far greater, Truth.

The historic lectionary takes us through a year of Christ’s life, His human life. And each year  spirals us into deeper depths of human truth, introducing us not just to characters in the “Christ narrative,” but to true humans and true events.  This is what separates the Bible from other ancient mythological texts.  Pagan myths are stories about characters, heroes and villains.   Their tales very quickly have a narrative structure, the likes of which scholars like Joseph Campbell were able to outline in his “Hero of a Thousand Faces.”  Jordan Peterson has developed a cottage industry telling these “stories” according to his psychological narrative, and has tried to assume the Bible “story” in his project as well.

The Gospel has something very human about it eluding all attempts to fit it to the rules of narrative.  There are few heroes and few villains; the sins of the saints are manifest; there are no stock characters.  Jesus becomes human in fully human context, and the people he meets are real and true, even as He is Real and True.

Last week’s Parable of the Sower taught us this. Our narrative-impulse immediately wants us to see the overarching, abstract system presented by Christ, a teaching on the Word, for instance, and then we move on. We might forget the infinite variety of life cast into the world of our faith life by that parable. Thousands of seeds begetting trillions of varieties of life, each unique. Jesus took one such life when He presented the lily and begot a teaching which itself has changed the lives of millions.

Christ’s life is not a narrative. It’s not a story. I don’t know when it happened, but around the 80s and 90s you began to hear the faith and faith lives of Christians described in terms of “stories” and the Gospel as a “narrative.” I’m not sure this is healthy. It’s been commented that Tolstoy is a great author precisely because he’s not an author, but a medium, so to speak, of human nature. He gets out of the way of real humanity and lets it manifest as it is.

There is one Author, the Author and Finisher of our faith. Today’s postmodern authors seem well aware of their role as God-usurpers, replacing His reality with their fantasy realities. The teenage boy absorbed for hours in his video-game world is way removed not just from Tolstoy, but from God.

Christ is a Tolstoy author taken to the next level. If Tolstoy is a medium of human nature, Christ is a manifestation of human nature as it is intended to be. The modern authors of humanity craft their ideologies and narratives and sap us of our humanity as we pair ourselves with what they think we should be and see how far short we fall – think the poor person going through his newsfeed and seeing the glamours lives of others, or the poor woman paging through her woman’s magazine beating herself for not “having it all.” It’s soul-sapping.

Christ is soul-enhancing, showing us in Himself a fuller – the fullest! – version of ourselves. To be in Christ is to live in a fuller humanity.

This is a long introduction for this week’s Gospel, which in a way is an answer to last week’s meditation on the Word. The Word creates faith, and that’s what this week’s Gospel on Jesus healing the blind man invites us to meditate on. It’s an incredibly human moment, drawing on several layers of faith. And these layers we will explore, with unfortunately only five days to do so (with an Ash Wednesday interruption!).