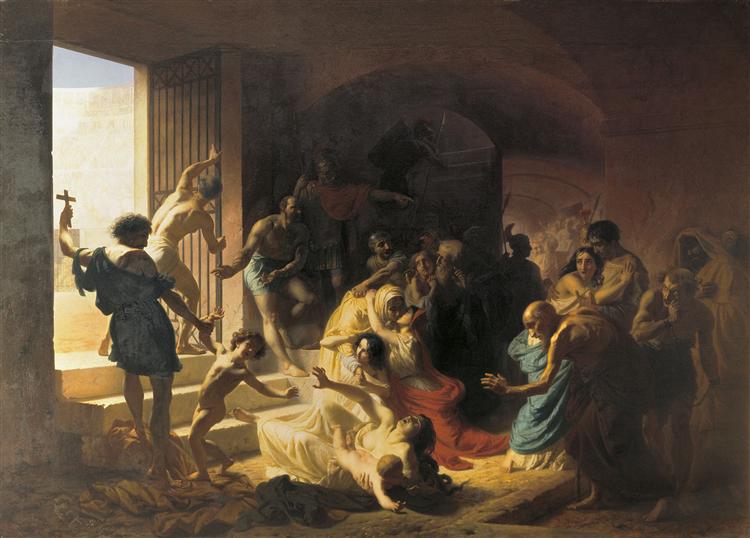 “And these things they will do to you because they have not known the Father nor Me. But these things I have told you, that when the time comes, you may remember that I told you of them.”

Why do people persecute Christians? Because they have not known the Father nor Christ. A good background to this passage comes from the first chapter of John: “That was the true Light which gives light to every man coming into the world. He was in the world, and the world was made through Him, and the world did not know Him. He came to His own, and His own did not receive Him.”

Jesus, the one begotten of the Father, is the one through whom the world is made. Everything of this world order is of Christ. And the fall doesn’t change any of that, for as St. Paul writes, “He who descended is also the One who ascended far above all the heavens, that He might fill all things.” This is why I’ve commented that there is a way to look at the world and only see Christ. Of course this is by faith, but what a promise of our faith this holds, that we might look at every person, event, and incident in this world and see only Christ, His love, and His goodness.

The world has always been seeking “the meaning of life.” What’s the meaning of it all? Why the world? Why humanity? What’s it all mean? To know Christ is to know that which was made through Him. It’s certainly not vice versa. To know the world without Christ is to project onto it that which humanity has chosen since the beginning, willful evil.

Yet, the world misses out knowing something about itself by rejecting Christ, and “not knowing” Him. It chooses to remain in confusion, and the single group of people who can explain the mystery of the world from the beginning, Christians, they reject precisely because they don’t know the Father or the Son. If they did, they would see in the world God’s plan culminating in the great “It is finished!” at the cross, and see the promise of man’s fulfilled creation. They would see the promise of eternal life, the resurrection of the body, and the inauguration of a new creation. They would see this world as moving toward a glorious renewal and a revelation of the sons of light.

Instead, the world would rather live in cynicism and doubt, embracing death, embracing the return to nothingness, embracing despair. Why? Why does it prefer death? Why, even though hundreds of witnesses saw a man beat death by rising from the dead, will they not seek to know Him? Jesus says because they loved the darkness rather than the light, lest their deeds should be exposed. That makes sense. Who wants to repent when doing so requires confessing, admitting, and dealing with our sin as what it is, sin and rebellion, rather than a lifestyle choice that defines who I am. Consider that, a man would rather go down with sinking ship that is his Self rather than embrace life. That’s pride.

It’s a pride so steadfast it leads to hatred of Christians, because Christians represent that group of people on earth who have embraced a life of repentance of Self and embracing of life. Christians threaten the one who worships Self.

In any event, Jesus concludes the selection saying, “I have told you, that when the time comes, you may remember that I told you of them.”

They say the martyrs get an extra gift of the Holy Spirit to help them through their trials. This verse certainly supports the idea. The time of persecution triggers remembrance of Christ’s words, and provides a special comfort. His words fill the martyr with reminders of who Jesus is, His relation to the world, the reason for His own suffering, what that suffering means for the world, and the glorification that His suffering represents. No wonder the martyrs sang hymns. They were being glorified.

So ends the Easter Season. Lot’s of John’s Gospel! Lot’s of deep mysteries, about the Lord’s goodness, about the work of the Holy Spirit, about life in a hostile world. Really, much of what John was writing lays the foundation for his Revelation, which deals with the same theme: God is in control and leading everything to a good conclusion, but this is hidden from us. Yet, as it was for John, so can it be for us. There is a faith possible which can peer into this world, even all its darkest valleys, and see the Lord with them, working everything for His good, for the ultimate completion of His creation. For as St. Paul writes, “He who has begun a good work in you will complete it until the day of Jesus Christ.”