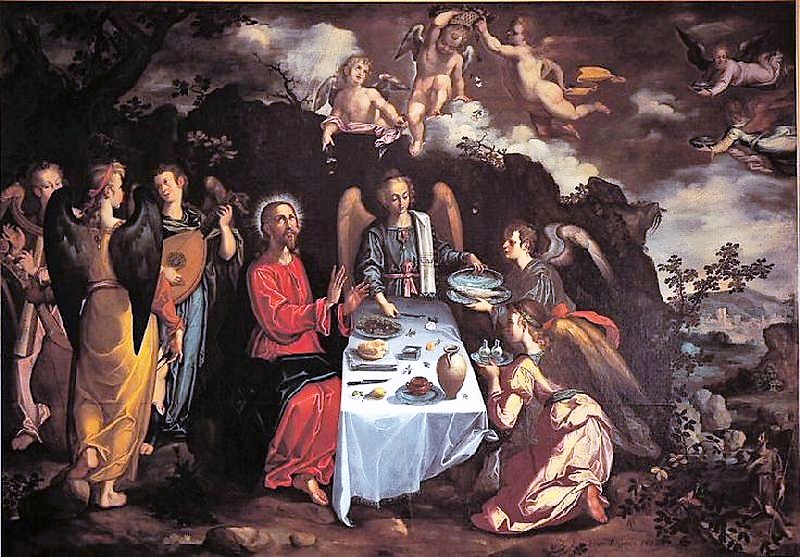 Then the devil left Him, and behold, angels came and ministered to Him.

On Judgment Day, Jesus will return. The sheep will be at his right hand, the goats on His left. The judgment will be based on how they received Christ in His weakness. Hungry, thirsty, a stranger, in prison, weak, naked, these are the words describing Jesus in His humiliation, culminating, of course, on the cross.

The sheep will be judged as having received Him through “His brethren,” that is, the apostles He sent out. Matthew 10 provides a good backdrop. Jesus sends out the apostles on a mini-mission and promises them that they’ll be without clothing, without food or clothing, imprisoned, and estranged. Yet, “whoever receives you receives Me.” It’s the same theme as what happens on Judgment Day.

The goats, by contrast, do not receive Christ in His weakness or His apostles who bear His cross. Listen to what they say on Judgment Day: “Lord, when did we see you hungry or thirsty or a stranger or naked or sick or in prison, and did not minister to you?”

Ministering to Jesus is what the saved do. And that simply means receiving Him in His weakness, or in our case today, receiving them whom Jesus sends, the pastors and missionaries who often bear great burdens in their administration of the Gospel.

In the wilderness, Jesus was at an incredibly low point. He was the scapegoat thrust out into the wilderness, having just been baptized and bearing the sins of His people. The devil had just attacked Him with challenging trials, leading Him to doubt Himself: “If you’re the Son of God…”

In the end, the devil left Him. The devil had no compassion, no room for ministering to Jesus. He abandoned Him in the wilderness to die.

Not so the angels. The angels came and ministered to Him. What did this mean? It probably at least meant they gave Him food and drink. A few verses back in the Gospel we learned the angels had hands with which to bear up them that fall, so it shouldn’t be too strange to imagine angels bringing food for Jesus. They also provided companionship, visiting Him and speaking with Him. Bringing up a theme we’ve been returning to regularly, speech has the power to strenghthen the soul. “A wholesome tongue is a tree of life,” says the Proverb. What holy conversation they had!

Did Jesus need clothing? Did He need a way out of a vast desert? Who knows, but whatever He needed, the angels provided.  The painting above suggests they played music for Him!  Why did they do this? Because they are “spirits sent to serve” yes, but also because they love their Lord.

And this is among the many reasons why, when Jesus returns, He’ll be with His angels.

Many Christians and pastors are in the wilderness right now, and not just because its Lent and they might be in a “wilderness training program.” They are suffering for the Gospel, for the Word of God, for their advocacy of God’s Law in an antinomian world. They often struggle financially. How many Christians or pastors find themselves isolated because of what we believe? How many have to endure dangerous temptations of body, mind, and soul because Satan targets God’s children?

Those who minister to them are like the angels, and they will be with Jesus on Judgment Day, not wondering where Jesus was when He was among them as hungry, thirsty, a stranger, naked, weak, and in prison.

Consider St. Paul’s words to Timothy: “May the Lord grant mercy to the household of Onesiphorus, for he often refreshed me and was not ashamed of my chains, but when he arrived in Rome he searched for me earnestly and found me – may the Lord grant him to find mercy from the Lord on that day!—and you well know how many ways he ministered to me at Ephesus.”