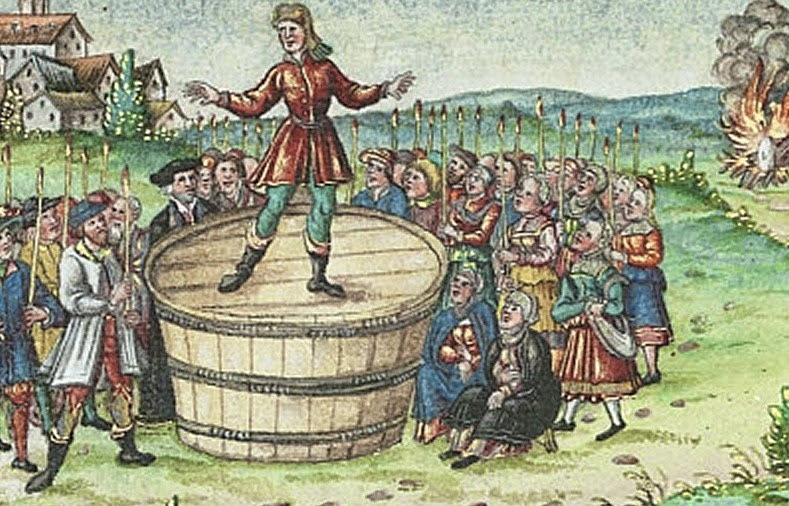 “Therefore when Jesus perceived that they were about to come and take Him by force to make Him king, He departed again to the mountain by Himself alone.”

We’ve had a bit of a break from tracking the scent of Gnosticism. This week’s Gospel has so much rich biblical material, so we’ve taken a break to rejoice simply in the beauty of what Christ gives us. Of course, lurking in the background has been a lot of good theology that’s anti-Gnostic, namely, how Jesus’ flesh and blood are our “bread from heaven” through which we have our Sabbath rest and avoid God’s wrath. But we haven’t really addressed specific Gnostic teaching.

Not so today. The fact is, today’s words from the Gospel set up among the most anti-Gnostic teachings in Scripture. But let’s set up the background.

Gnosticism generally would abhor any political component of its teaching. It’s a teaching of ignoring this world, after all. Politics if anything is all about this world.

But there is a more practical Gnosticism, something political philosopher Erik Voegelin recognized and warned against. This sort of Gnosticism looks at the ruler of this world, the Demiurge, the chief Archon, and says, “What if we overthrew the God of this world and took the reins, so as to rule ourselves?” We could make the world actually a good place, not a place oppressed by various networks of power structures.

This is the “long march through the institutions” approach of the new left. The goal is not to overthrow “the system” but to take it over. We’ve been witnessing this take over for the past 30-40 years, the takeover of academia, media, and politics.

Fundamental to this ideology is the belief that they are “on the right side of History,” that their goals have been deemed by some sort of divinity to be the future.

Ground Zero for this theology is a Medieval monk named Joachim of Fiore, who believed there were three ages in world history corresponding to the three Persons of the Holy Trinity. The Father’s age was the age of Law and sacrifice, the Old Testament Age. The Son’s age was the post-Pentecostal age of the Church, sacraments, the ministry, and doctrine. The Spirit’s age, beginning in his day, would be a day when there would be no intermediary between God and man. The Holy Spirit would work directly upon the souls of the Elect, so that no Church, ministry, or sacraments would be needed. “Book-learning” would be replaced by direct knowledge from God. Finally, the Lord would inaugurate His kingdom on earth through these elect saints.

This is known as millenarianism. It’s the belief that God is using His Elect to inaugurate His kingdom on earth. After Joachim, many millenarian cults flourished. Each of these movements ran their course pretty much the same way. A charismatic “prophet” would arise claiming enlightened understanding of the Scriptures by the Holy Spirit. He’d gain a following by bolstering their pride, telling them they are the “Elect” on the right side of history, that is, in accord with where the Lord was leading history. The movement would flourish for awhile, as the cult attempted to live communally, share everything, cancel debts, and live only by “love.” Usually the movement began to be tyrannical in its puritanism – they are the Elect after all! There can be no tolerance for error or impurity! Finally, the movement fizzles out as reality sets in.

The philosopher Hegel attempted to secularize millenarianism, demythologizing it and reconstituting it through political movement. He spoke of a spirit, a dialectic of History moving things in a certain direction. This is where the phrase “the right side of History” comes from. Marx and others followed Hegel, and according to Erik Voegelin, thus began the modern totalitarian movements. It’s the belief that, in accordance with some magical “History,” as one conscience after another is awakened (woke anyone?), we will have a political order that effects everything Jesus promised would happen with His kingdom: peace, no disease, no poverty, etc.

What does this have to do with Gnosticism? Again, Gnosticism proper eschews politics. But there is a practical Gnosticism, sometimes called “proletarian Gnosticism,” known as Hermeticism, that allows for the political realm to reflect the ideal of unity and collectivism that is the Gnostic goal.

The big point is this. At root of both Gnosticism and Hermeticism what I like to call the “fuzzifying” of the borders between God and man, due to the denial of Christ’s flesh as the border of God. Joachim fuzzified the borders when He said Christ’s age was over, and the Holy Spirit’s age was at hand. Where with a healthy understanding of Christ’s incarnation, you have a clear point at which God ends and you begin – that being Christ’s flesh and blood! – in the age of the Spirit you don’t have that clear point. Now there’s a fuzzy line where God ends and you begin. Now you take on the responsibility of God, because you believe you are the Elect whom God is moving to bring about His kingdom. Where the Lord’s prayer’s petition “Thy kingdom come” suggests a clear line between suppliant and Lord – we’re not praying to ourselves! – this isn’t the case in millenarianism. You answer your own prayer!

Well, in the feeding of the 5,000, originally Jesus was the main actor. He was clearly doing all the action. He had the people sit down. He blessed the bread and caused it to multiply. He directed His apostles to distribute the bread. He caused there to be extra baskets for His New Sabbath.

But Jesus would have none of it. He slipped from their hands and went back up the mountain. Likewise today, whenever people want to “make the kingdom of God happen” on earth, believing they can eradicate hunger, famine, war, disease, and all evils through government action, Jesus will slip out of their hands as well. Jesus is Lord, and He alone is the holy one. He will do His kingdom His way. We are along for the ride.