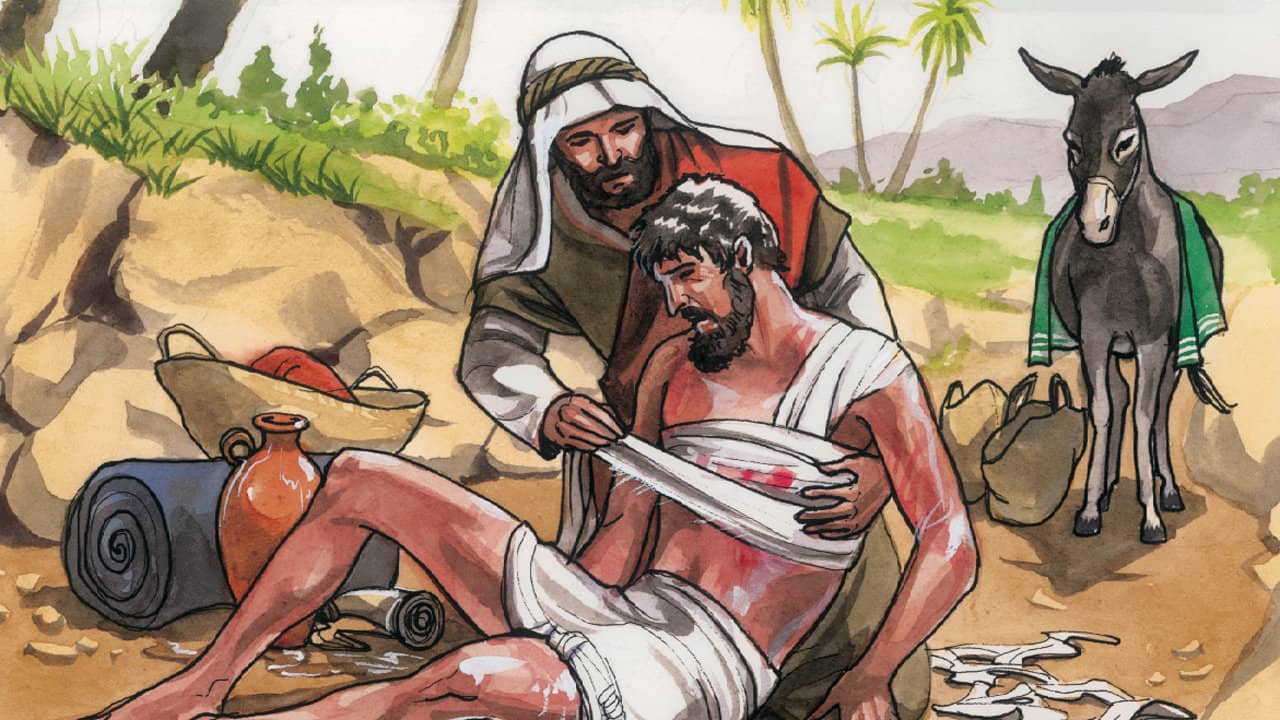 So which of these three do you think was neighbor to him who fell among the thieves?” And he said, “He who showed mercy on him.” Then Jesus said to him, “Go and do likewise.”

What exactly was the lawyer supposed to “do”? Remember, his question was, “Who is my neighbor?” Jesus’ answer is, “The one who shows mercy is your neighbor.” And then says, “Go and do likewise.” Does that mean, do as the Samaritan did or do as the wounded man did?

Yet, Jesus never accepted the premises of those who tried to test Him. Never. Watching Jesus answer the questions of those trying to test Him is like watching an unsuspecting animal wander near a hidden snake. He shatters their premise and takes them to new heights.

He doesn’t really answer the question. He turns it on its head. When we want to focus on the minimum we need to do in order to be obedient to the law, Jesus re-frames the issue. It’s not about what you need to do, but new ways of defining neighborliness, that is, having mercy. The Samaritan exemplifies new way; the lawyer was stuck in an Old Testament way of thinking.

So, when Jesus says, “Go and do likewise,” He simply means, “Join the new way of doing things, a way centered not on the minimum requirements of the Law, but on mercy. So yes, be the Samaritan who had mercy.”

The “be the wounded man” answer takes us in a different direction. Here, when Jesus said, “Go and do likewise,” He meant, “Rather than defining down your neighbor, be prepared to be the object of his mercy when you need him.” This is probably an overly literal way of interpreting it, but it does fit the words of the text. Who is my neighbor? The one who shows mercy on you when you’re bleeding on the side of the road. Go and be that person! Be the wounded one dependent on another’s mercy.

Both directions clearly highlight important aspects of the Gospel, each unified by the general principle that our Lord is merciful and wants mercy to be the mark of His people. As Jesus spoke in His sermon on the plain, in Luke, “Therefore be merciful, just as your Father also is merciful.” This is a bit different than what Jesus said in His sermon on the mount, “Be perfect, as your heavenly Father is perfect.”

But then again, it’s very much similar. The lawyer wanted to know what he must do to gain eternal life – what is God’s perfection, so that we may be saved? Jesus begins with the lawyer’s own premises rooted in Old Testament law. Love God and love neighbor. The lawyer – representing all those stuck in the old way of thinking, including our old selves and old Adams – wants to know the limits of that love. Jesus delimits love with His parable, revealing unconditional mercy as the norm. “Go and do likewise,” He says. He ends with mercy.

To be perfect as the heavenly Father is, is to have mercy. What is mercy? To look after those injured on the side of roads. To give them long term care. To get to this point, you first have to recognize that you yourself are that injured one at the side of the road, and have been taken care of by “the one who has mercy.”

Who is that? Well, that brings us to the Fourteenth Sunday after Trinity. It’s the one the healed leper returned to and gave thanks. It’s Jesus Christ.

Go and do likewise. What does this mean? Receive mercy from the Lord and give it to others. “Be merciful, as your heavenly Father is merciful.”