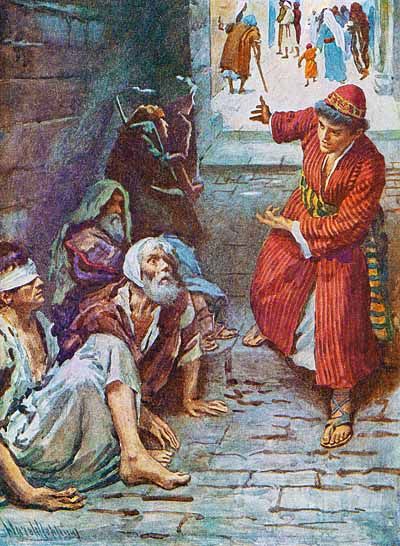 “[A]nd compel them to come in, that my house may be filled. For I say to you that none of those men who were invited shall taste my supper.”

“Compel them to come in.” What does this mean? There is no ambiguity in what the word “compel” means. It means exactly what it says: compel. But what does it mean theologically?

Does it mean the Church should force people to be baptized, as some interpreted it to mean in the early Middle Ages, when barbarian kings converting to Christianity would march their tribes through the river three times, in the name of the Father and of the Son and of the Holy Ghost?

Or does it justify the inquisition, when by force of torture representatives of the Church compelled correct thinking?

In a sermon on the phrase, the famous preacher Charles Spurgeon spent most of his sermon using several tactics to “compel” his hearers to come to faith. One of them was, “Sinner, in God’s name I command you to repent and believe.” He went on to try a loving approach, a threatening approach, a pleading approach, an apologetics approach, and finally simply weeping for them.

C. S. Lewis argued the phrase refers to God’s mercy: “The hardness of God is kinder than the softness of men, and His compulsion is our liberation.”

Does it support the Calvinistic idea of irresistible grace? Accordingly, once God has you in the cross hairs of His grace, you can run but you cannot hide. He will get you into the kingdom, and resistance is futile.

I think there’s a lot we can take from each of these interpretations. My simple take on the phrase is: the message of the Gospel is compelling.

Let’s begin discussing the various interpretations with a rather surprizing reality. Of all the Christians on earth today, or born throughout history, the vast, vast majority entered into the kingdom by “Plan A,” that is, the march-through-the-river way. Aren’t most Christians baptized as children? Did they have a choice? Most certainly, they were literally compelled. Yet, as they grew up, what they were compelled into became compelling. Why? Because all along it was the work of the Holy Spirit. Whether in baptism or catechism, it is the Holy Spirit’s work to call, gather, and enlighten the sinner into the Gospel.

As to the inquisitorial approach, the knee-jerk reaction is this is always wrong. You can’t force a confession of faith. Yet, is there not something to the truth, not only about faith but about lots of things, that sometimes you have to fake it til you make it, or that what at first must be forced will later be loved? How many parents will force their weeping kids to go to church, just as they’ll force them to eat vegetables, be polite to others, and do all sorts of things their Old Adam would not want them to do? How many of us force ourselves to go through the motions of faith even though our hearts may not be totally there? For how many of us is the liturgy like an inquisitor compelling our faith, because deep down we have a “heart of hearts” faith deeper than where our heart is at in any given moment? The “inquisitorial” approach to “compelling” is probably far more common than we would suspect.

The Spurgeon approach is a good reminder to pastors that the work of preaching is an act of pleading, exhorting, begging, and arguing. The message is compelling, and the preacher must faithfully proclaim that message in all its compelling force. But he himself is also part of that message, insofar as he’s burdened by a love for his flock, a love for the lost, and a vision of God’s plan regarding the lost that’s more acute than others, given his time spent in study of God’s Word. A faithful messenger cannot leave the presence of his Lord, where he’s getting his instructions, and not be overwhelmed, not only by the examples of Biblical messengers, but by the truths he’s encountering.

The Lewis line, “The hardness of God is kinder than the softness of men,” I think gets closest to a technical answer to what “compel” means. Another commentator wrote the word means God’s grace must overcome people’s natural desire to politely decline offers of grace. Imagine the pleading of the messengers to the vagabonds and travelers out in the highways and hedges. “Our master really wants you to join him. Please come! You need to be there. It’s a great meal.” It’s not a “Join us or else” threat, but a “Please come, I insist” approach. One is by force, the other is by love. This clearly is in the end what is intended by the word.

The Calvinistic idea of “irresistible grace” must in the end by rejected for doctrinal reasons – in the end man retains his ability to reject the Gospel – but there’s a takeaway here as well. Because yes, very often God’s Word is like a bounty hunter of the rebellious soul. Very often a convert will come kicking and screaming into the Church. And very often a Christian will come kicking and screaming into new growth. Hard is the heart indeed that is able to seal off the soul to any work of the Holy Spirit. It requires more than mere resistance, but a willful, knowing, ideological establishment of an alternative doctrine or idol shutting off all penetration by the Holy Spirit. (On these terms, this is why I’m not convinced atheists are really atheists, but simply resistors of the Holy Spirit trying to think Him out of pursuit, like someone plugging his ears and saying “Bla bla bla I don’t hear you.”)

All of these approaches can be subsumed under the banner of “compelling,” which when understood under the teaching about the Holy Spirit is a wonderful comment on God’s grace. The Gospel simply is compelling. Whatever way you look at it, it’s compelling.

It’s compelling institutionally, homiletically, prophetically, and practically, inserting and exerting itself into society, culture, and politics no matter the consequences.

It’s compelling because the Holy Spirit is behind it, because God in His mercy wants the beggars, vagabonds, poor, maimed, lame, and blind at His supper.