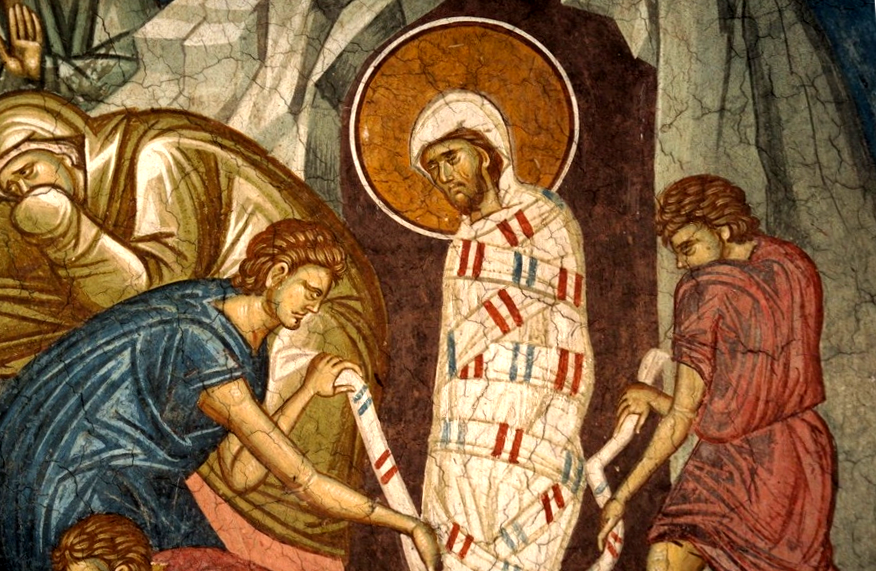 Abraham did not see death, but saw “Jesus’ day.” Abraham lives. This is why the Jews showed themselves to be of their father Satan when they said, “Abraham is dead.” No he’s not. For as Jesus argued, God appeared to Moses and said, “I am the God of Abraham, Isaac, and Jacob.” God is not the God of the dead, but of the living.

So, of course, we assume that when Abraham died, his body was buried, but his spirit floated off into heaven and there he saw the promised Messiah, so yes, he saw Jesus’ day and was not really dead.

Hold on for a second. When Jesus made His argument about God being the God of the living, He wasn’t making an argument for the immortality of the soul. He was specifically making a case for the resurrection of the body. Spend a moment or two contemplating that, because it’s an important point: To prove the resurrection of the body, Jesus pointed out how God said He’s the God of Abraham, and because God’s a God of the living, Abraham must be alive yet, this being understood as resurrected!

Here’s another problem, and that’s the assumption that when Abraham died, his spirit floated up into heaven. For Jesus says, “No one has ascended to heaven but He who came down from heaven, that is, the Son of Man who is in heaven.”

So, how is that Abraham lived to see “Jesus’ day” and never tasted death, and that he was in a state of resurrection when God appeared to Moses at the burning bush?

We are dealing with mysteries here, particularly with time and space, but lets lay down some basic concepts.

Understanding that, we can understand a bit more clearly what it means to die and rise again. To die is when your body ceases to have the spirit animating it. To live is to have the spirit animating it once again. What of the time after death and before resurrection? Who knows? The Gospel doesn’t really focus on this period but for a few fuzzy references that may or may not be symbolical (for instance, in Revelation 6), that is, the Gospel doesn’t focus on this period very much at an objective level, meaning, at a doctrinal “What happens between death and resurrection” level. It more focuses on the resurrection.

But here’s what’s interesting and what the Gospel does focus on, and that’s the subjective level. That is, what happens to me, or to Abraham from Abraham’s perspective, or to any believe from their own perspective. Here’s what we know for sure.

First, you will not die. In this week’s Gospel, the two words are “taste” and “see.” You will not taste death or see death. You won’t die. Everyone else will think you’ve died, but from your perspective, the day of your death will be the day of your resurrection. Abraham lived to see the day of Christ’s return. So will we. (So did Stephan, I’d argue. He saw Jesus standing just before dying. We confess Jesus to be sitting; when will He stand again?)

I imagine it will be something like, “Hey, I’m dying, dying, dying…here I go…whoa! Jesus returned just as I was about to die! What a coincidence He showed up to save me just before I died! Who would have thunk!” And this will be the experience of all believers.

Second, you will be “with Jesus.” That’s how St. Paul puts it. From your perspective, the moment you die you will be at the resurrection, have your resurrected body, and be physically with Jesus. You will see your Lord, just as Abraham did. And remember Jesus argued Abraham was resurrected as well! (Else God wouldn’t have said He was a God of the living.) In some mysterious, time-warpy way we can’t possibly understand, those who die and experience their resurrection – yes, the second coming of Christ – can be said (as Jesus said of Abraham) to be in a resurrected status.

Now, people will say, what about from the outside perspective, from the perspective of those who see the body lowered into the grave. On one hand, who cares. I mean, of course we care about their sadness and grieving, but as far as the life of the one people lowered into the grave, what they experience is as relevant as the experience of those who remain awake during someone’s surgery. Their experience has no bearing on what the one operated on experiences.

What matters is what our Lord says. The one who believes in Him will not see or taste death. (They will taste and see that the Lord is good!) Sure, the rest of us will see death, the death of the one lowered into the grave. But really, this issue is between the one who we perceive to have died and the Lord. And for them, there is nothing but life.

Or put another way, as ridiculous and counterintuitive as it may appear, the one being lowered into the grave is just sleeping. Yes, that’s the proper way to look at it. We see someone sleeping being lowered into the grave. They themselves have sort of skipped over this whole part, experiencing their resurrection already in some time warpy way. Whatever it is, Jesus’ words stand. They don’t see or taste death. They see “Jesus’ day,” the day of His return. So it was for Abraham, so it was for Stephan, so it is for us.