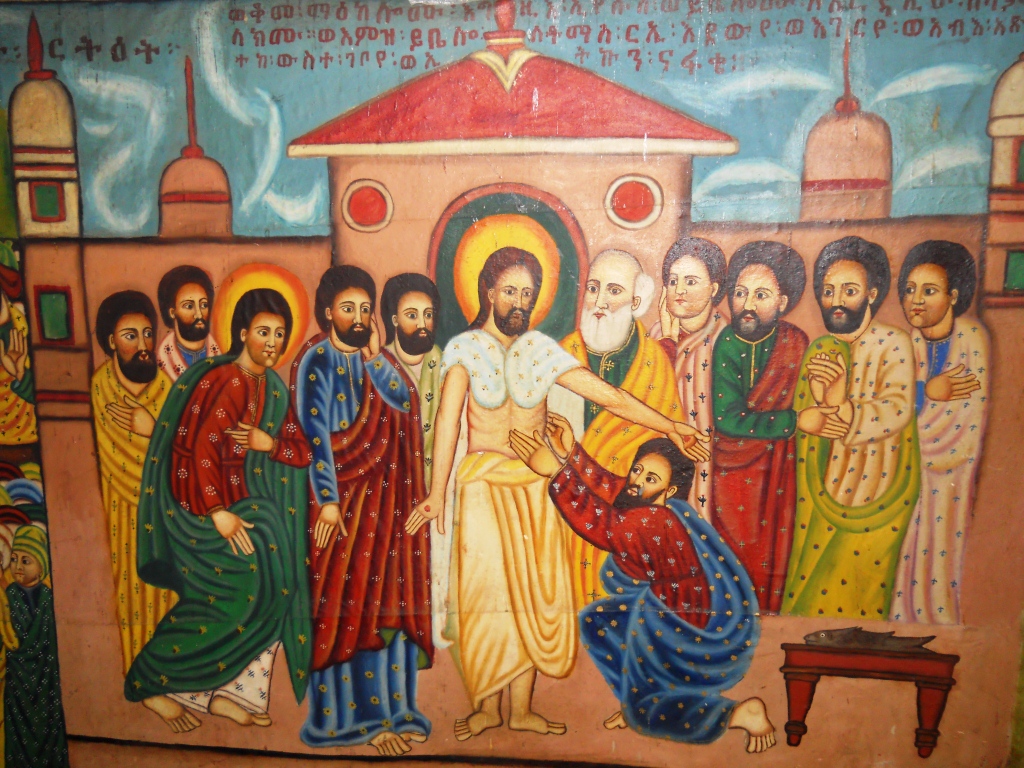 Doubting Thomas. Or so he has been dubbed. Why? Because he wanted visual proof?  But wasn’t one of the jobs of an apostle to be someone who witnessed the Lord? St. John made an explicit point how he had witnessed the events of the crucifixion, and St. Paul justified his status as an apostle: “Have I not seen the Lord?” What good is a witness if he doesn’t actually see what he’s supposed to be a witness of?

Furthermore, and this gets to a deeper point, but nothing in the text says he “doubted.” Here is exactly what Jesus said, “Do not be unbelieving, but believing. …Thomas, because you have seen Me, you have believed. Blessed are those who have not seen and yet have believed.”

Jesus just states facts. The first time Jesus appeared to the disciples, Thomas wasn’t present. By one interpretation, this was a problem. You can almost hear Jesus saying, “I really wish you were here. Part of your job is to witness me. What’s on your schedule for next Sunday? I know what’s on my schedule for every next Sunday til the end of time.”

When Thomas was present the next Sunday, Jesus didn’t leave Thomas to rely on the witness of others. No, again, his job as an apostle was to witness the resurrected Lord. So Jesus appears to Thomas again. And He says, “Do not be unbelieving, but believing.” We hear that as a scolding, but is it? Maybe Jesus is just saying it factually, as in, “Thomas, you no longer need to be in a state of non-belief due to the fact you never saw me. You see me here, right? In fact, you can do more than see me. Check out the wounds. Now you can be believing.”

And then, when Jesus makes the statement, “Blessed are those who have not seen and yet have believed,” why do we see this as scolding? Again, is Jesus not simply laying down a truth? “You, Thomas, believe because that is your job as an apostle, to witness me. From now on, people will believe without seeing me, based on your witness. Blessed are they.”

Why do we always want to turn Jesus’ words into these little do-goodery, finger-wagging nags? “Don’t be a doubting Thomas!”

Far better, how about, “Thanks be to God that Jesus came when He knew Thomas wasn’t there, to substantiate the witness, that it was truly Him in the flesh, the crucified one, that witnessing the pierced one was not just a one time, one Sunday, event, but something that carried on the next Sunday, and now by implication, every Sunday after that, for those who believe not by sight, but by faith alone.”

But again, why do we want to turn Jesus into a scold or a nag who makes us feel insufficient all the time? This interpretation of the Gospel – the “doubting Thomas interpretation” – allows me to bring up another bugaboo. The Mary and Martha Gospel from Luke.

Here again, the common interpretation is, “Here you see two examples of how to behave. Mary does better than Martha. You should be like her.” And we’re all supposed to feel guilty because we don’t spend every spare minute sitting at Jesus’ feet hearing His Word.

Here is exactly what Jesus said to Martha, “Martha, Martha, you are worried and troubled about many things. But one thing is needed, and Mary has chosen that good part, which will not be taken away from her.”  This is very true to the Greek (being the New King James Version).

Notice how the NIV translates it, “Martha, Martha,” the Lord answered, “you are worried and upset about many things, but few things are needed – or indeed only one.  Mary has chosen what is better, and it will not be taken away from her.”

Is it “better” to focus on God’s Word rather than work and do one’s vocation? Jesus in fact doesn’t address the issue because in the original Greek He doesn’t use the comparative. And remember the context of Him defending Mary. The context isn’t that Martha should be “better” like Mary, but that Martha should get off Mary’s case, because she’s chosen something good.

Jesus deals in truths. Much like His teaching on the Sower, where there are different yields of fruit, He doesn’t deal in comparisons. “One seed yielded thirty, but how much better to yield sixty!” Nope, that’s not how Jesus works.

And nor does He get on Thomas’ case in this week’s Gospel for doing his job of witnessing. He merely says that those who believe without witnessing will be blessed.

And here’s the really big point. We often need to be careful with our reading of the Gospel. We very often read into the text assumptions that are not necessarily there, we read our own assumptions into the text.  When we read Scriptures, it’s important we let the words stand on their own. The more we read ourselves into the text, the less effective they will be.

This week’s Gospel isn’t a “don’t be a doubting Thomas” text. Rather, it’s a text that says, “How awesome that we will be blessed even though we don’t have the witness, and how thankful we can be to Thomas that he wasn’t gullible, but substantiated the sureness of his witness, and so laid down a solid apostolic foundation.”