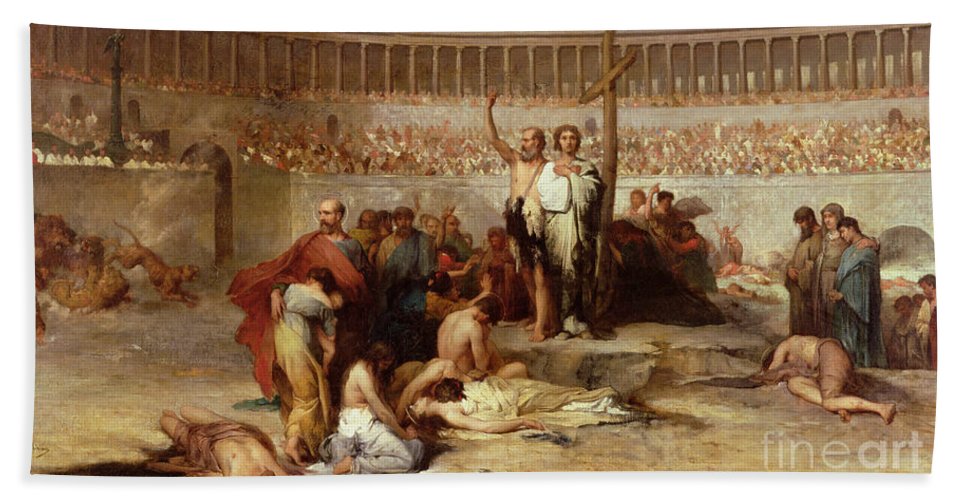 Among all the questions we face as humans, perhaps the most difficult one is the problem of evil. Where does evil come from? Why does it happen?

In fact, the problem of evil is only a problem to those who assume the existence of a good God. Think about it. If there is no God, what is good or evil? Isn’t what we consider evil just the workings out of evolutionary nature? T-Rex has a big ole brontosaurus burger, using his mouth like a woodchipper for its poor victim, and we’d say this is nature doing what nature does. How different is that from a murderer or rapist preying on the weak. Some evolutionary biologists have even argued rape is perfectly in line with evolution!

On account of nature’s brutality, the “pessimistic philosopher,” Arthur Schopenhauer, rejected the God of this natural order (i.e., our God) and pursued a more Gnostic understanding of God, that is, a divine force transcending this material world order with all its darkness and death.

And this is another solution to the problem of evil, the Gnostic one. Gnosticism proposes there are two forces at work in the cosmos, a greater good God who transcends this material realm, and a lesser evil God who created the physical universe. They famously rejected the Old Testament God as this evil God, and embraced Jesus as a messenger of Light from the good God who has nothing to do with this world.

Gnosticism pervades the thinking today of those who look at the evils of the world and lay the blame at the “systems” and “institutions” of this evil world order. Only by a revolutionary rejection of nature and all its laws – by rejecting this world’s Creator! – can we ever begin to undo all his evils.

The problem with Gnosticism is it denies the almighty nature of God. God created the heavens and the earth, and all things visible and invisible. There is nothing not outside His management. If there are evils, we must confess He is ultimately in control of them. He’s not authoring the evils, but allowing them and managing them in accordance with His wisdom.

What then? How do we solve this problem of evil?

I always like to ask these two questions to explain the Christian solution to the problem of evil. First, what is the worst crime, evil, and injustice ever done in the history of our world? Second, what is the best thing that ever happened in the history of our world? The answer to both questions is the same. Jesus dying on the cross. Here, God took the greatest crime ever and turned it into the greatest salvation ever. He’s simply laying the foundation for St. Paul’s words, that God works all things for those good of those who love Him.

In any event, this is a long set up for today’s meditation on the rocky ground. Some seed fell among the rocky ground, and it grew up for a while, but as soon as times of testing came, the seed withered and died. These are they who fall away when hardships arise, when they have to lose friends on account of their faith or because they hold to what seems to be archaic Christian teachings (on sexuality, for instance), or when a loved one gets a fatal disease and suffers terribly. These are very often faith-crushing things.

Their problem is they had a false god. Or perhaps better put, they projected onto their god their ideas of how the problem of evil would be resolved, and named that god “Jesus.” In other words, they believed having faith in Christ would make everything good in their lives, and they’d be freed from many evils. Jesus never promised this. He promised persecution. He said, “Take up your cross daily and follow me.” Further, there is no suggestion whatsoever in the rest of the New Testament that the Christian life would or could not be harsh.  Quite the opposite!

Simply put, life is rocky. But for those with faith, the power of that faith has always been their absolute certainty that whatever evils afflict them here are but a momentary prelude to a glorious redemption. These were the martyrs singing hymns in the lion’s dens. Their sights are set toward another world, and this recasts their vision of all the evils of this world. In every evil they see their crucified Lord. They see – even in the depths of Sheol – a place filled with God’s presence, and therefore they see a place of hope where no hope seems to reside.  In what others see as death, the Christian sees as the meeting place of his Lord.

There is nothing in Scripture to suggest that the Lord doesn’t send times of testing. He does it out of love. He does it because He disciplines those He loves as His own children. He does it in such a way that we cannot comprehend why He’s doing it – ask Job.

To update and paraphrase what God said to Job, just look at the universe. It’s staggering to contemplate how many stars are just in our galaxy, to say nothing of how many there are in the whole universe. Just to get to our nearest neighbor star would take four years at the speed of light, which will not happen. Even Voyager 1, which was launched in 1977, has only just recently left the solar system – the solar system! Oh, and God created all that in an instance.

If God’s head were the universe, we’ve just explored an area the depth of an atom on a follicle of hair on His ear, to say nothing of comprehending how His brain works! To think we can wrap our heads around the problem of evil, or why things happen as they do, is simply foolish.

But God sent His Son to be a powerful testament to His ultimate purposes. Whatever evils there are, Christ has assumed them all, and has redeemed them, conquering over them in the resurrection. And this victory He has promised us. We don’t seek to escape the evils of this world as the Gnostics do. No, we take their burdens up daily and follow Christ, who Himself did the same.