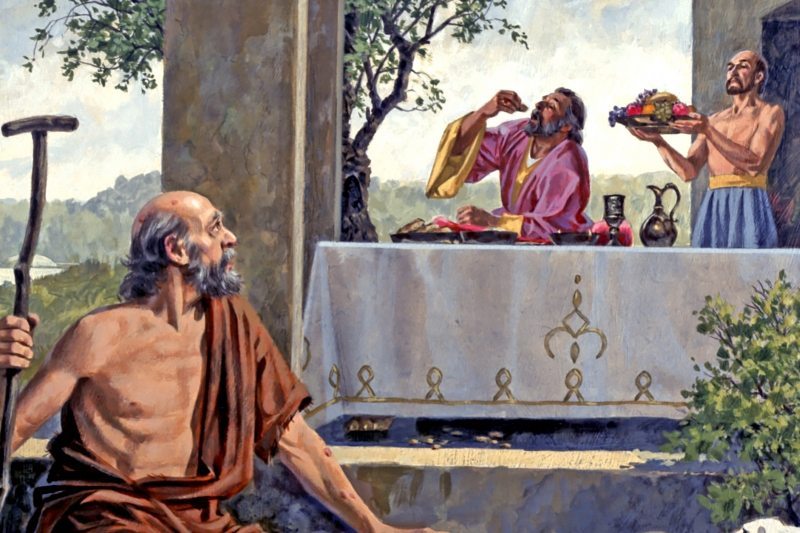 Is the account of the rich man and Lazarus an allegory? I along with many others have taken it as given that the account is not a parable, because it’s not introduced with Jesus’ traditional “parable” formula, “The kingdom of heaven is like…”, nor is there any mention it’s a parable. The story reads like a real event. “There was a certain rich man…”

But that doesn’t necessitate it being a real account. Clearly Jesus taught earthly stories with heavenly meanings all the time, used metaphors and analogies to teach, and spoke in cryptic ways, why could this story not be the same?

I’ll admit I have a bit of interest in it being an allegory, as the account is one of the more difficult passages to work into my particular argument about our status between death and resurrection. Simply put, I’m not so sure there needs to be consciousness between death and resurrection, that we may have a sort of soul sleep, that the moment of our death will be the moment of our resurrection, that at death we will “fast forward” to Christ’s return, and just as Christ says, we will not “see” or “taste” death, but like Stephen, we will immediately see Jesus standing, returning.

What, then, of our status between death and resurrection? Luther described it as a deep sleep, a blissful period. Here, we can take what Abraham says of Lazarus – it’s a state of comfort. But whether we have active consciousness, so that we can talk back and forth with people “on the other side,” I’m not so sure needs to be the case.

If Jesus is using an allegory, it could be His way of ascribing personified meaning and conversation to genuine truths. I believe something similar is going on in Revelation 6, where it is written, “When He opened the fifth seal, I saw under the altar the souls of those who had been slain for the word of God and for the testimony which they held. And they cried with a loud voice, saying, ‘How long, O Lord, holy and true, until You judge and avenge our blood on those who dwell on the earth?’ ”

Are there really souls in heaven under and altar crying out for vengeance? Or is this an allegory rooted in Genesis 4: 10, the type of all martyrdom: “The voice of your brother’s blood cries out to Me from the ground”? (See also Matthew 23: 35) Otherwise, we’d have to claim there is a sense in which those who have died are unsatisfied, or unfulfilled. Frankly, crying out for vengeance doesn’t sound very much like “comfort.” So I have no problem seeing Revelation 6 as an allegory, a use of picturesque imagery and personified characters to express truths.

Regarding the account of the rich man and Lazarus, if it’s an allegory, it would slightly change our post-death chronology and topography of the afterlife. If in fact when we die we “soul sleep” until the resurrection, we go to the grave (to Hades or Sheol), but the faithful sleep in the Lord (Abraham’s bosom) awaiting resurrection, while the damned await the resurrection into the lake of fire. On these terms Jesus is ascribing sentiments and thoughts to the rich man which would be his upon his resurrection unto damnation.

Interesting that Lazarus says no words. Is he sleeping? And interesting that Abraham happens to be awake and conscious. But didn’t Jesus teach that Abraham had already resurrected at the time of the burning bush? (We’re getting time warpy here again! But look at Jesus’ argument to the Sadducees. He argues for the resurrection by citing the burning bush passage, where God says He’s the God of Abraham, Isaac, and Jacob. Jesus says God is a God of the living. He makes this argument to prove the resurrection!)

In any event, if it is an allegory, what exactly is the allegory?

It could be an allegory of the Jews and Gentiles, one that Jesus repeatedly uses and perhaps dominates most of His parables. St. Paul, after all, refers to the inclusion of the Gentiles among the great mysteries of God’s revelation. The parable was Jesus’ instrument of revealing mysteries. As He said, “To you it has been given to know the mystery of the kingdom of God; but to those who are outside, all things come in parables.”

So, here’s the allegory. The Jews were the rich man. The purple clothing represented the Jewish status as “royal priests.” They had been blessed with an abundance of God’s riches. Interesting how often St. Paul uses the word “riches” when describing the blessings of God’s mercy, and at least in Romans, he usually does so in the context of discussing about Jews and Gentiles, as in “For there is no distinction between Jew and Greek, for the same Lord over all is rich to all who call upon Him.”

Meanwhile, the Gentiles were the beggars, as far as God’s gifts went. Here, the parallel is with the Canaanite woman, who like the beggar hoped only for bread crumbs to fall from the table. (You even have the “Gentile dogs” making an appearance.)

The table itself, and the fellowship going on there, is a big theme in the Gospel of Luke. Sitting at Christ’s table, at His supper, is to enjoy the riches of His mercy, heaven itself. Until Christ, that table was administered by the Jews. And how did they treat the Gentiles? Evidently like dogs, a posture Jesus mimicked when dealing with the Canaanite woman.

Another clue in the text is the language the rich man uses as he converses with Abraham. It’s extremely familial. Three times the rich man calls Abraham father, and once he refers to his own father. He also refers to his brother. Meanwhile Abraham calls him “son.” This is a family affair, a family of blood relations. Who calls Abraham father but the Jewish people, excluding Gentiles from that fatherhood? And who had to make the argument that Gentiles too were his children, but those taught by Christ about the new family “born from above” in Abraham’s starry bloodline?

For as St. Paul said, “Therefore know that only those who are of faith are sons of Abraham. And the Scripture, foreseeing that God would justify the Gentiles by faith, preached the gospel to Abraham beforehand, saying, ‘In you all the nations shall be blessed.’ ”

Jesus demonstrated how the Jews should have been with their riches, something St. Paul alludes to when he writes, “Indeed you are called a Jew, and rest on the law, and make your boast in God, and know His will, and approve the things that are excellent, being instructed out of the law, and are confident that you yourself are a guide to the blind, a light to those who are in darkness, an instructor of the foolish, a teacher of babes, having the form of knowledge and truth in the law.”

Jesus fulfilled what the Jews were intended to be, a light unto the Gentiles. Instead, because of their abuse of the law and reliance on man’s traditions in interpreting the law, they excluded the Gentiles outside the gates. Of course, lots is going on with the gates as well. “And the Levite, because he has no portion nor inheritance with you, and the stranger and the fatherless and the widow who are within your gates, may come and eat and be satisfied, that the LORD your God may bless you in all the work of your hand which you do.”

So, as far as salvation goes, the Jews were excluded from Abraham’s bosom, separated by the gulf. What exactly is Abraham’s bosom? It’s actually the figurative place of Jewish burial, the place from which the resurrection would happen. This is why it was so important to be buried in the land of Israel, because that was Abraham’s promised land, and so literally, his bosom, from where the sons of the resurrection would be “born from above.”

Perhaps the strongest clue to this interpretation is that Abraham says, “If they do not hear Moses and the prophets, neither will they be persuaded though one rise from the dead.” This was the Jews’ problem. They did not properly hear Moses and the prophets, who taught sharing the riches of God’s grace with the Gentiles, nor did they even hear “though one rise from the dead,” who was Jesus Himself.

Or, interestingly, perhaps Jesus was even referencing the real life Lazarus, who in fact did rise from the dead, but whose existence evidently still didn’t convince the Jews. Rather, as we are told, “But the chief priests plotted to put Lazarus to death also, because on account of him many of the Jews went away and believed in Jesus.”

Was that Lazarus a Gentile? Probably not, but it could very well be Jesus is using him as a symbol of the blessings God is bestowing on all people through the resurrection, and just as the Jews wanted him dead, they wanted to keep the Gentiles in the deadness of their sins.

The argument that this Gospel is an allegory in fact has lots of justification. Whether it is an allegory or not, the fact that Jesus’ Word has an unfathomable depth of meaning which can be eternally tapped, in so many ways, only proves its divinity, and His.