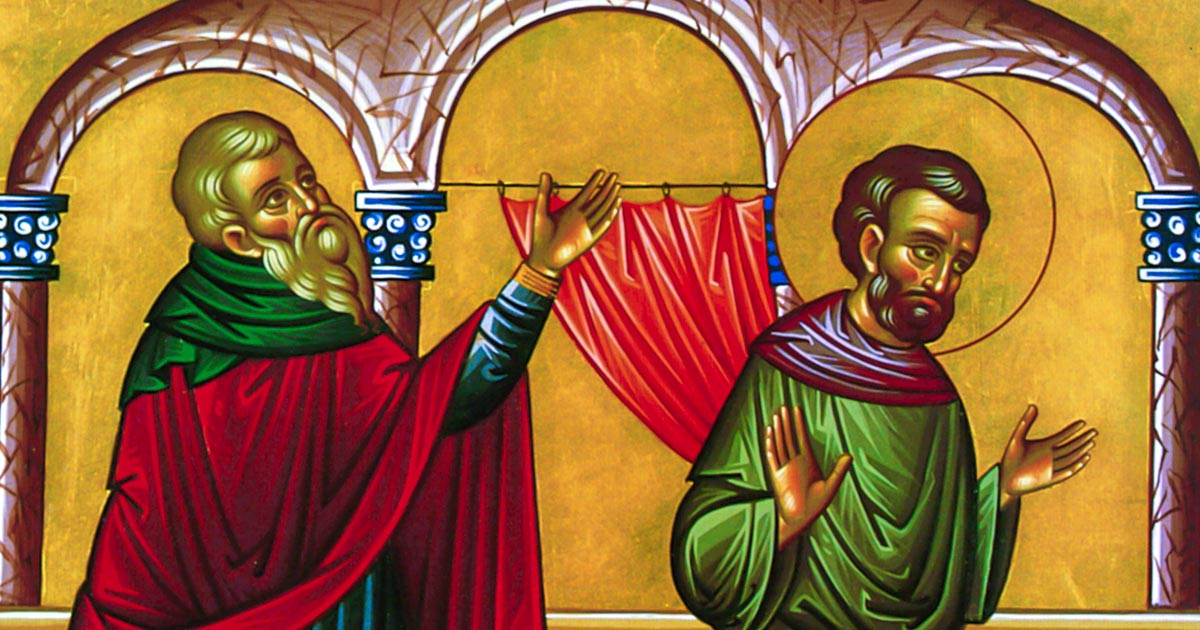 The Pharisee stood and prayed thus with himself, ‘God, I thank You that I am not like other men – extortioners, unjust, adulterers, or even as this tax collector. I fast twice a week; I give tithes of all that I possess.’ ”

Think about the Pharisee. Let’s look at him from another perspective. Imagine you came across a man who was pious, had a grateful heart, who takes care of his body, and does charitable giving. You see him offering his religious services regularly – you see him quietly praying toward the front of the building. By all standards, this is the sort of fellow the world praises.

And I mean that genuinely, not in that cynical way we Christians do when we talk of the “world” with a rightly contemptuous sneer. I mean, he’s the sort of person you look up to, who at the end of his life you say, “He lived a good life; he was a good person.” Because, in fact, he is.

Furthermore, when you get into his religious outlook a bit, you find out what his piety is like. He truly is grateful to God for everything that he is. You detect a bit of elitism as he looks at those lesser than himself and says, “But for the grace of God go I.”

Finally, let’s say you were to ask him a theological, sort of out-of-the-blue, question. Let’s say you were to ask him, “Tell me about God. Do you think God is someone you should order around and command, or do you think something other of God?” He’d likely be gentlemanly enough to say something like, “I wouldn’t presume to command God anything. Whatever we get is purely God’s grace working in us. You either use that grace for good or you don’t. Some people (like me) get more grace; others less.”

We like his theology, a theology acknowledging God as an aspect, an important aspect of a well-rounded, whole, rich life. It’s a theology similar almost to that of the Stoics. There are divine forces at work in the world. Your relationship with these divine forces is friendly, gentlemanly. “God helps those who help themselves,” is the motto. Work with these forces, not against them.

The tax collector in fact does presume to command God, to give Him an imperative. “Have mercy on me, a sinner!” Consider that. The Pharisee makes not demands upon God; the tax collector does. And the latter is the one who goes home justified. God avails Himself to us as someone to be demanded of, even commanded: have mercy on me!

“[H]e will gird himself and have them sit down to eat, and will come and serve them.”

“If I then, your Lord and Teacher, have washed your feet, you also ought to wash one another’s feet. For I have given you an example, that you should do as I have done to you.”

“I am among you as the One who serves.”

“For even the Son of Man did not come to be served, but to serve, and to give His life a ransom for many.”

The Lord came to serve us in our utmost need, to save us completely. It’s how He wants us to approach Him, not as a fellow traveler in this journey called life who can help us along the way – and we appropriately thank Him when He does – but rather as the sole source of our life and salvation, without whom we’re toast, therefore we desperately cling to Him and insist on his help, because that is what He promises to give.

Lord, have mercy on me, a sinner! The one praying that goes home justified.