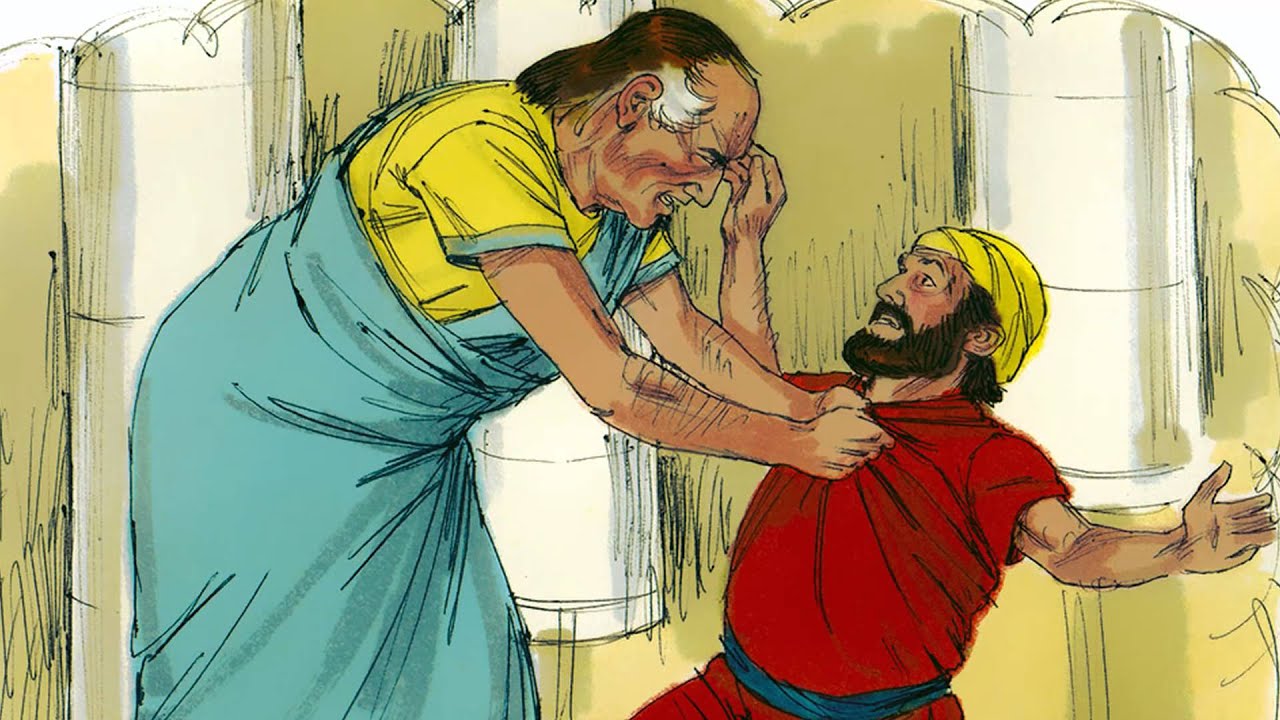 “But that servant went out and found one of his fellow servants who owed him a hundred denarii; and he laid hands on him and took him by the throat, saying, ‘Pay me what you owe!’ So his fellow servant fell down at his feet and begged him, saying, ‘Have patience with me, and I will pay you all.’ And he would not, but went and threw him into prison till he should pay the debt.”

Evidently the servant here missed the memo, that the king had issued a sabbatical year of debt forgiveness. Who knows whether that Hebrew law (the sabbatical year of debt forgiveness found in Deuteronomy 15) provides any background to this Gospel, but at least we can say, for the one servant – and presumably for any other servant who would have begged for mercy – there was a sabbatical heart of debt forgiveness available in the king. And those who “supped” from that heart would surely, cheerfully share the goodness in the whole kingdom, at least those who understood the new world which arose from the king’s heart.

Isn’t that how it’s supposed to go? The king sets the tone for the kingdom. He even gave the servant the benefit of the doubt, and answered a prayer he didn’t ask. The servant asked for time; the king gave him forgiveness. Grace and goodness around for everyone, in utmost abundance!

And here goes the servant, getting stingy about a hundred denarii. How much is a hundred denarii? A denarius was about two dollars, so we’re talking about $200. It’s not nothing, but after you’ve just been forgiven billions…it’s nothing.

I believe our passage for meditation today is among the most central verses in all of Scripture. It perfectly explains the relation between justification and sanctification. And how often is the teaching repeated? Forgive us our debts, as we forgive our debtors. We love others because our Lord first loved us. As the Lord has been gracious and generous to us, so are we to be toward others.

That would only be difficult for someone who didn’t (a) realized how great his debt of sin was and (b) realized there was no way he would ever repay it.

Think about it. There are three types of people, let’s say. First is one who doesn’t believe he has a debt, so being forgiven a debt would mean nothing. He’s sort of a fool; he’s the non-Christian. Second is the one who realizes how great a debt he has, but thinks he can repay it. He’s the one who has the right understanding that God forgives sins, but he still lives in a world where he can “make up” for his sins. In a world where people can “make up” for their sins, why shouldn’t he expect others to make up for their sins just as he has? Finally, there’s the one who realizes how great his sin is, and realizes he can’t ever repay it. He’s the one who will have a forgiving heart toward others, because he desperately needs and wants that world where debts are forgiven.

Lack of forgiveness toward others arises from bad theology, precisely the sort of theology embraced by the first servant, a theology which believes in a world where people make things right regarding their sins. That being the case, the Church’s responsibility – which is Jesus’ bigger point throughout this chapter – is to be the instrument by which our Lord creates that new world. Indeed, the Church is that new world!

And if any in the church, whether by teaching or by practice, would get in the way of the Lord creating that world, well, what are the warnings?

“Whoever causes one of these little ones who believe in Me to sin, it would be better for him if a millstone were hung around his neck, and he were drowned in the depth of the sea.”

“And his master was angry, and delivered him to the torturers until he should pay all that was due to him.”

This is talking about hell. Some look at the “until” and recognize the possibility of an end, which suggests for them Purgatory. Those are interesting discussions, but that’s not the point here. The point is the Lord will not forgive the one who is responsible for interfering with the Church being a testament to the Lord’s forgiveness. Again, Jesus is serious about the forgiveness He won for us on the cross.

And if we run with this understanding of the torturers, that it’s referring to hell, we get some more guidance on the sad reality of the original servant throwing his fellow servant in debtor’s prison. If we don’t forgive others, we impose our own personal hell upon them. Or, we put them in our own personal purgatory. We stand in the place of God.

We live in a world where sinners go to hell, or need to purge their sins off in purgatory, so we pass that world on to others. No one ever lives up to our standards. People live in misery because of the world we make for them, because we put them in our personal debtor’s prison. How sad! And how sad to see this at play in the world, especially among Christians.

Jesus has created a different world, a new kingdom, a place of utmost generosity. The Church and its members – all of them – are testaments to that forgiveness. The moment anyone forgets this, and returns to a world where repentant sinners aren’t forgiven, but sentenced to hell, well, the Lord will give him that world.