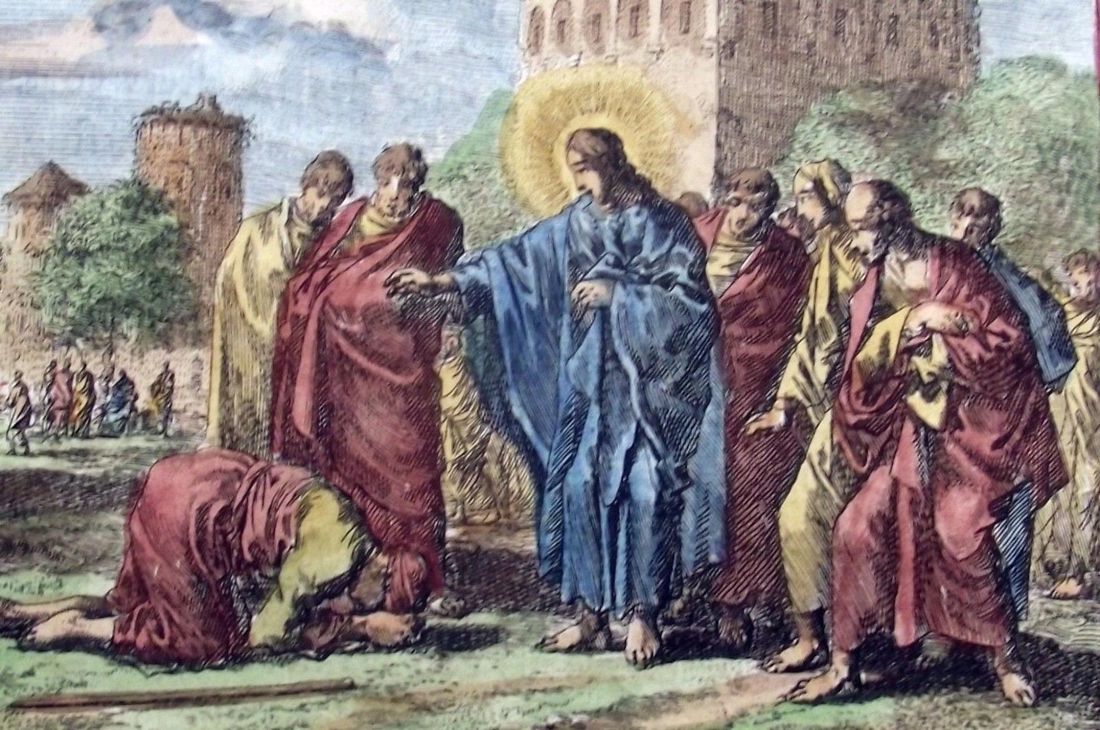 When He had come down from the mountain, great multitudes followed Him. And behold, a leper came and worshiped Him, saying, “Lord, if You are willing, You can make me clean.”

Jesus never says “I am God.” He elicits testimony and confession that He is God. He Himself says, “If I bear witness of Myself, My witness is not true. There is another who bears witness of Me, and I know that the witness which He witnesses of Me is true.”

Here, He’s referencing His own baptism, where the Lord did bear witness of His Son, and John the Baptist affirms, “I did not know Him, but He who sent me to baptize with water said to me, ‘Upon whom you see the Spirit descending, and remaining on Him, this is He who baptizes with the Holy Spirit.’ And I have seen and testified that this is the Son of God.”

Same thing with the Transfiguration of Christ. Peter, James, and John were there to be witnesses. As Peter wrote, “For we did not follow cunningly devised fables when we made known to you the power and coming of our Lord Jesus Christ, but were eyewitnesses of His majesty.”

Jesus never says, “I am the Lord thy God. Worship Me!” He elicits testimony and confession. How does He elicit it? Sometimes by the Father’s Word, sometimes by His own miracles, and very often by His Word.

In our passage for today, the leper is responding along with the multitudes to what Jesus taught in the Sermon on the Mount. Recall that after the sermon it is written, “And so it was, when Jesus had ended these sayings, that the people were astonished at His teaching, for He taught them as one having authority, and not as the scribes.”

It was His teaching that elicited the action we see in the leper in our passage for today. And what was that action? “[B]ehold, a leper came and worshiped Him, saying, ‘Lord, if You are willing, You can make me clean.’ ”

The testimony and confession is twofold here, one comes by action, the other by word. The action is worship, which in the Greek is “to fall down and worship.” It’s what the wise men did when they came to the manger. It’s what Satan tempted Jesus to do in exchange for all the kingdoms of the world. Notably Jesus says, “You shall worship the LORD your God, and Him only you shall serve.” The sort of worship the leper does is reserved only for “the Lord your God.”

Jesus may not say, “I am God.” But when a leper does something about which Jesus has said, “You shouldn’t do this for anyone but the Lord your God,” and He doesn’t stop him, the message is clear: standing here is the Lord God!

The second testimony and confession comes by word. For, what is it to say, “You are able to heal me and cleanse me”? It is to confess that such a one is God, and has the power of creativity, which God alone has.

So, what’s going on with the way the Lord elicits testimony and confession, rather than declares who He is simply and clearly? Why reveal Himself in such a roundabout way?

Because Jesus is revealing Who He is by way of grace. He is building a world into which He invites us, through repentance, baptism, and confession, to find salvation. A building built any other way is more a jail than a home. A building built on the premise of “You’d better believe X, or Y will happen” is a jail whose bars are fear.

This truth sparkles in our passage for today. The leper’s confession is followed by Jesus’ response, “I am willing.” He is a willing God, willing to heal and save!

Now, Jesus could just as well have said, “You’re right to worship Me, because I am God, but I am not willing! I just preached the Sermon on the Mount and told you people how to live, and look how much you all fall short! Shape up and then we can talk.”

Rather, the tone is, “My sermon has just built a home with gracious words, because as the Lord that is what I do. I taught that you have a loving heavenly Father along with Me, for I am sharing my sonship – yes, I’m willing to share it – with those who hunger and thirst for it. You will be blessed with life and salvation. Come into the home and begin to conform yourselves to this new reality.”

That is hospitality. That is true friendship, as Jesus works out His mission as “friend of sinners.” And that climaxes, by the way, in a glorious feast.