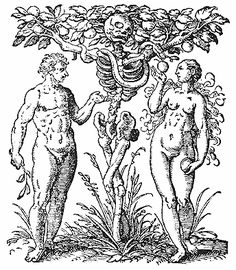 “Why do you not understand My speech? Because you are not able to listen to My word. You are of your father the devil, and the desires of your father you want to do. He was a murderer from the beginning, and does not stand in the truth, because there is no truth in him. When he speaks a lie, he speaks from his own resources, for he is a liar and the father of it.”

This Gospel has a series of contrasts between God the Father of Jesus and Satan the father of His Jewish enemies. Against the truth that Jesus brings by His word, the devil stands for lies. Against the life Jesus gives out, the devil is a murderer.

There’s another expression in this Gospel that invites some probing. Jesus says to His antagonists, “The desires of your father you want to do.” What are the devil’s desires?

At face value, of course the devil has always been one to tempt us with “desires” (or better, “lusts”). It was his first temptation. “So when the woman saw that the tree was good for food, that it was pleasant to the eyes, and a tree desirable to make one wise [knowing good and evil].”

Surely based on this use of the word “desirable” St. Paul twice called covetousness “idolatry.” It’s the foundational sin that sets us against God. Further, idols are nothing more than the phantasms projected by human desire, “otherized” in concrete forms and terms to give us the illusion (the deceit) that they are something. As the Psalm says, “Those who make them are like them.”

In the Gospel for this week, Jesus connects the devil’s lusts and desires with murder. We can see how this relates to the devil’s original temptation. Adam’s giving in to the desire for the fruit led to the curse of death – Satan thus “murdered” man with his “desires.”

But let’s probe the issue a bit more deeply. At the completion of God’s creation, everything was very good. It was lacking in nothing. There was nothing Adam lacked. What was there to desire? What even is desire when you have everything? Contentment isn’t a virtue; it’s just what you have by virtue of existence in God’s creation!

Again, we’ve brought it up before that the Lord’s introduction of a Tree of the Knowledge of Good and Evil introduced something “beyond the good.” So, in Adam’s mind there was the “very good” creation, created through the Lord’s Word, named and under the dominion of Adam, completely given by the Father’s grace, a place of pure, unwilled contentment. Adam lived in this creation, and he could have lived in this contentment.

The Tree of the Knowledge of Good and Evil surely caused Adam to wonder, “What’s evil? It must be something beyond ‘everything that exists,’ which is good, right?” But how can you go beyond “everything that exists”? “Everything” is pretty all inclusive, and it’s a logical impossibility to grasp beyond all that exists.

On one hand the temptation to evil is the desire for a chimera, an imagined thing that is unattainable, because it doesn’t really exist. It’s a phantasm, a nothing-dream formulated by our mind to be a something, an idol, but because it has no greater basis than our own “knowledge,” our projecting into the void, it only deceives. How much of sin and lust is rooted in this? It’s the materialistic soul ever seeking that world suggested by the magazine ad, or the lover ever seeking that world suggested by porn (or romance novels/movies), or the philosopher or scientist ever seeking all-encompassing system, or the politician ever seeking that utopia.

On the other hand, the temptation to evil is existence-denying, being-denying, because all these chimeras have the slow effect of corroding what actually is. The desire for a humanistic utopia leads one to ignore the human that lives next door. The desire for the perfect spouse leads to awful effects on the spouse one actually has. The discontented desire for that fantasy house and fantasy life undoes what you actually have. How many millions were murdered on the march to utopia? This is Satan’s murder.

Of course, Satan loves all this, because He hates God’s material creation. He wants it to return to a state of non-being. That’s the triumph of evil, the work of evil to undo “everything that exists,” which God had declared very good. Frederick Nietzsche, Satan’s loyal servant, once wrote, ““Nothing is ‘given’ as real except our world of desires and passions.” This is the ultimate deceit in which we live today, the idea that “everything that exists” is nothing more than the product of our desires and passions. If ever there were the triumph of “evil as such (the negation of God’s good creation),” the deceit that the desires for “beyond what exists” is actually the only thing that really does exist, this is it.

Jesus is the antidote, the Seed in which – in the midst of a world returning to nothingness – “everything that exists” resides – the “I Am” – like a capsule guarding the DNA and designs of everything God created. Jesus is the “very good” creation all wrapped up in Himself, as St. Paul says, “in Him all things consist.” And from Him the new creation will come into existence, the I Am doing what He has been doing from the beginning.

And against Satan’s “desires” and Nietzsche’s “nothing is given but those desires” we have Jesus, the Lord, Who affirms that the opposite is true. All we have and all we are is by God’s given-ness, and that is not nothing, but everything.