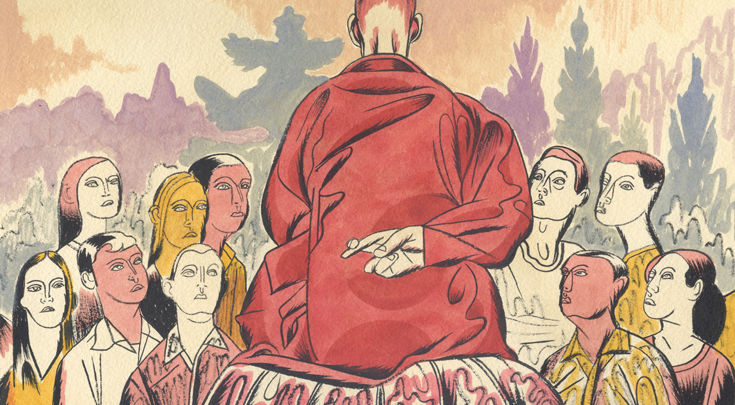 We see Jesus’ words of warning here as absolute and somewhat frightful. But we can also see it as Him jealously guarding the absoluteness of the sacrifice He would make so that we could fulfill the Law in Him. For anyone to be lax just a little bit on any of the commandments is to take from what Jesus would have to sacrifice in order to answer the Law.

Who are the ones who break the least of the commandments and teach men so? These are the Pharisees. For those who, when they hear “Pharisaical,” immediately think of sticklers on God’s Law merely need to look at Jesus’ words here. It was the Pharisees who tried to modernize and update God’s Law, to make it readily applicable for the people. This is why they were popular. It’s also why they ended up with lots of “how to do” manuals regarding God’s Law. If the Pharisees lived today, they’d be publishers of all sorts of “Ten Scriptural Principles Guiding Your Finances” type books.

Jesus pointed out how, in their updating of God’s Law, they ended up undoing God’s Word. Therefore they were the “least in the kingdom of heaven.” Why? Well, if Jesus is jealously considering the Law which demanded His sacrifice, we might get some insight here. By the Pharisees updating the Law and deceiving the people that they could keep it in a perfunctory manner – “Just to A, B, and C, and you’re good”– they were undermining Jesus’ sacrifice. Why need a Savior if you’ve just kept the Law by doing the simplified stuff the Pharisees taught you to do?

By contrast, those who teach the fullness of the Law in all its absolute, penetrating truthfulness, a truthfulness straight from the heart of God, will fully embrace Christ’s sacrifice in all its profundity. Jesus died because of the lovelessness of His people, because they call others names and are angry at them, because this is what “Thou shalt not kill” really meant. To have Jesus’ sacrifice for lovelessness in ones mind and still call others names or be angry at them is to, as the book of Hebrews says, sacrifice Jesus all over again.

Yes this is harsh. But Jesus’ words are harsh and allow little wriggle room. Wriggle room is what the Pharisees allowed, and again, that’s why they were popular. But the harshness of Jesus’ words are the only way to put to death the old Adam, to lead us to die each day of our old sins, to get us in that abject state crying “Lord, have mercy,” and to have that proper hunger and thirst for righteousness that only Jesus can satisfy.

But this doesn’t suggest Jesus is playing some Law/Gospel game with us, as some teach. By this I mean, some claim Jesus is just teaching the “Law as mirror” here, showing us our sins so that we rely on His mercy, grace, and forgiveness. The implication is, we can never truly follow what He teaches, but no worries, Jesus is just trying to get us to the point where we completely rely on Him.

Jesus, after all, does offer a reward. It would be pretty cool to be called great in the kingdom of heaven. If one can attain a life in which name-calling, anger, lust, swearing, and worry are at a minimum, he will be called great. Now, the nature of Jesus’ teaching is that, precisely because He sets the standard so perfectly, no Christian will ever feel himself at this point. He’ll know his heart and the sin that lurks therein. He’ll continually hunger and thirst for righteousness and be filled, and continually seek to put to death the sinful behavior.

But what is the end goal for this person? Is it to attain that reward of being called great in the kingdom of heaven? Or to be able to get away with sinning, because he can’t reach the standard anyway, so he falls back on God’s grace. Not much hunger and thirst there. Do we hunger and thirst for righteousness, or for forgiveness? That’s an interesting question. Is forgiveness the pathway to righteousness, or the end in itself? That’s another interesting question?

Furthermore, is the quest for righteousness compatible with the quest for being called great in heaven? Jesus suggests it is. Do we teach enough the worthiness of seeking the rewards of heaven? It used to be a staple of preaching: Aim to please Christ and get great rewards! But have we become so egalitarian that we can no longer fathom anything other than everything being equal in heaven? Is that our democratic ethos shaping our understanding of the Gospel?

No one teaches the Law better than Jesus. No one does Law and Gospel better than Jesus. But the biggest abuse of the Law/Gospel dichotomy is how it ends in cheap grace, the perfunctory guilt we embrace on the way to the great “phew, I’m saved.” No, the Law should keep us a bit jittery, and the way Jesus teaches it, it does. Those who call someone “moron” will be in danger of hell. No wriggle room.

Likewise we have to take Jesus’ offering of a reward seriously. He who does the Law and teaches it properly will be called great. The offering of rewards seems to go against the idea of the Gospel – that Jesus forgives all our sins so we’re not judged to hell – but does it need to? Why can’t we be spared from hell, but also have rewards awaiting us in heaven? Jesus certainly suggests there will be some called least and some called great in His kingdom.

Another interesting thing Jesus brings up is the connection between doing and teaching. How often do teachers of the Gospel build elaborate schemes to justify what they do? Here’s a difficult question: Does every teacher of the Gospel do that? And if that’s the case, is the only good teaching the teaching that arises from a teacher who does good, because any teaching from a teacher who doesn’t do good will be tainted by his subtle schemes? Didn’t St. Paul say that a teacher must be above reproach?

We can see this in obvious cases where, say, divorced ministers or gay priests re-fashion Christian teaching to remove the difficult teachings that don’t accord with what they do. What would liberal Christianity do without such a dynamic?

But does it happen among those whose teachings appear orthodox? Do they fashion their teaching in ever so subtle ways to relieve themselves of a clear commandment from Christ before which they fall short? Does it happen in ways we don’t notice, both in the disciple and in the teacher?

God save us! And yes, I do feel jittery! I also hear St. Peter saying, “Repent therefore of this your wickedness, and pray God if perhaps the thought of your heart may be forgiven you.”

This is why Jesus’ is the best teacher of the Law. He doesn’t allow us to fly the updraft of rarefied theology into the ether, looking smartly down upon the big picture, thinking, “Ah, I see what He’s doing here; He’s using the Law as mirror, giving us the Law to get us to the Gospel; OK, OK, let’s amuse Jesus and go through the process, and get to the good news ‘phew’ part.”

No. Personally that “does and teaches them” terrifies me. I don’t always keep all the commandments, especially as He fulfills them in what He teaches about them. I’m pretty sure I teach them, but insofar as I perhaps don’t “do” them, I wonder if my teaching reflects that.

But it sure would be cool to be called “great.” So, if that motivates me to live a life in conformity with what I teach, is that a bad thing?

We get some answers to these questions in the verse that comes next, but lets leave it at that for now. As a preacher and teacher, part of me is always at this point, and must remain there.