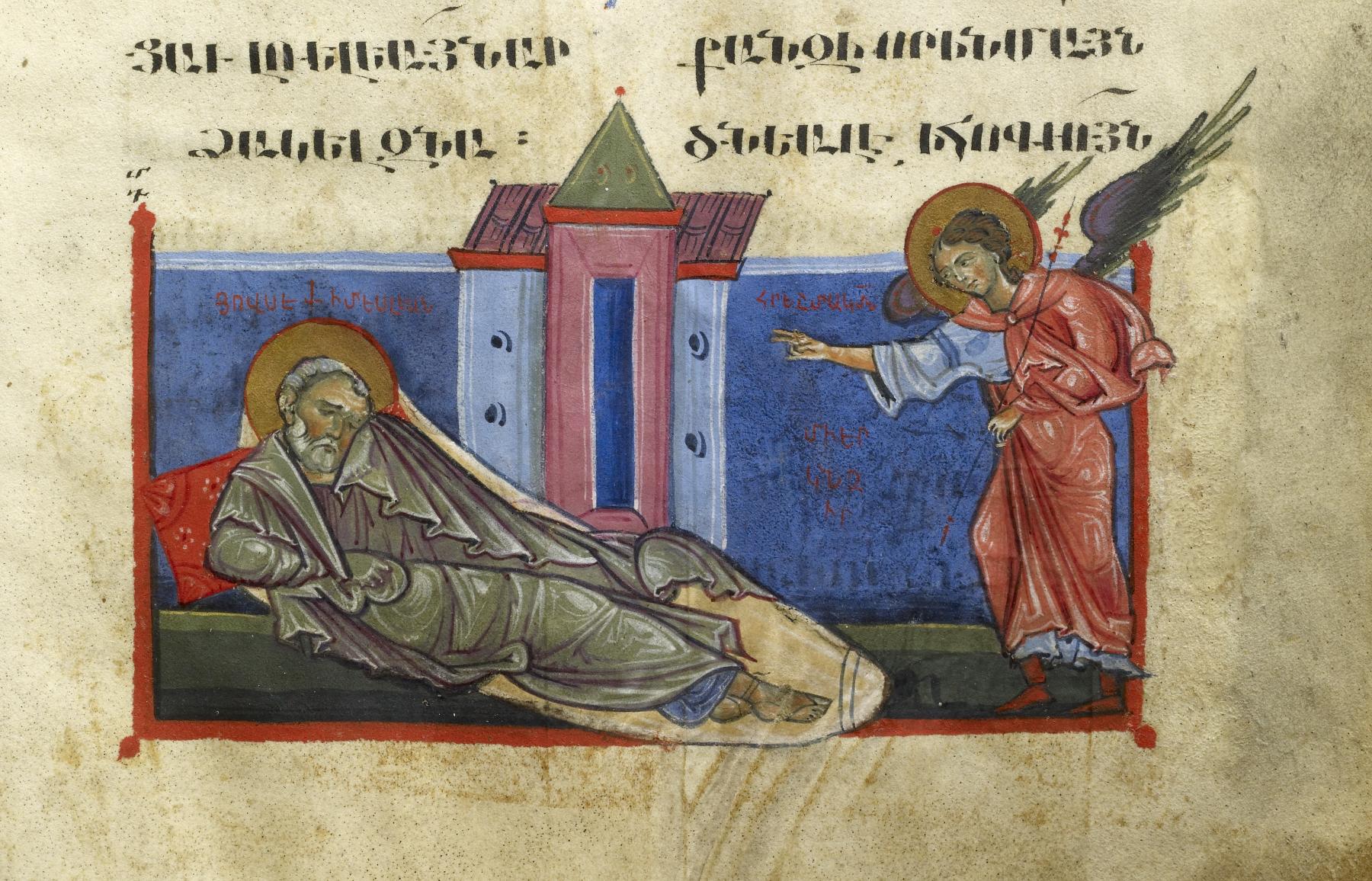 The other day I had a dream I had driven off a highway into a body of water and had to release my young, submerged kids from their seatbelts. That dream changed my behavior …exactly not one bit whatsoever. Save some feelings of horror, waking up was a nice release, as I prepared to drive my children to school the way I might any other time.

I’ve had lots of dreams. You’ve had lots of dreams. How much do dreams effect our behavior? Not much. The dreams in Matthew 2 result in migration and changed caravan routes. What is the difference? The difference is, our dreams are stories our brains construct from the detritus of memories (true, why it constructs what it constructs is interesting), but the dreams of the wise men and Joseph are from God.

With the rise of Gnosticism in America, about 50% of Americans are believing God speaks to them, not in the context of the Bible or the proclamation of God’s Word in the Divine Service, but personally. Let’s unpack what this means with reference to one of the premier modern Gnostics, Carl Jung.

The Jungian take on the mind is that it arises from a collective unconscious. Put in the terms of YouTube sensation Jordan Peterson, the human species has acquired certain psychological apparatuses over the sixty million years of our evolution that help us survive. If as monkeys in trees our enemies were birds of prey, big cats, and snakes – such that sight of such beings would have triggered survival mechanisms in our monkey brain – we carry that instinct in our “psychic DNA.”

But as we leave the trees and start walking erect out in the plains, those images, having been neutered by new circumstances, get re-framed as symbols of other, perhaps more sublime dangers. The bird, cat, and snake evolve psychically into the dragon, and the dragon becomes a symbol of certain dangers to the human soul. It emerges in our dreams and myths. Because it’s common to all humanity, it becomes a universal literary theme, true in Chinese literature as it is in Aztec. It also becomes a universal symbol in our dreams. It along with an infinite number of other symbols makes up our “collective unconscious.”

A human individual pre-consciousness will live by instinct through these symbols. But growth and maturation requires breaking free from the sway of these symbols, while yet reintegrating what is helpful and worthy about them into our world view. We go from being truly afraid of dragons – because we’re irrationally afraid of them – to recognizing what they can tell us about other fears.

The symbols, in a sense, can “speak to us.” In a sense, our dreams can be messages from a world that’s bigger than us – millions of years of collective evolution going back to the smallest reptiles and beyond. Jung at first saw God in this. “God” is us projecting our collective unconscious onto what he called the “patent screen of eternity.” But toward the end of his life he took a leap into the mystic beyond, and believed there might be an actual God at work, one he understood in Gnostic terms, that is, one transcending anything so tribal as a Hebrew God of Scripture or the Christian Jesus.

Jordan Peterson lurks in this same place, seeing in our psyches a universe of symbols and myths that, if only we could interpret them properly, we could gain what amounts to divine insight – and maybe there’s something “out there” or not, but if there is, it’s way beyond anything that could be formalized in a religion. It only speaks to us psychologically, or symbolically, through myth.

The dangerous thing about Peterson is he applies this understanding to Scripture itself. The story of Cain and Abel, for instance, is not about an actual event, when first a martyr was killed for divine worship, but about our collective unconscious speaking to us about brotherly relations. Moses was a prophet not because he received messages from God, but because he more ably tapped into the collective unconscious and more properly discerned its subtle ways. And perhaps the hallucinogenic effects of what we call “manna,” but was probably psilocybin, helped unearth those deep veins of psychic gold.

In our Gnostic times – Jung was a sixties hero – we will see dreams and signs and messages from the divine all over the place, seeing in any and every minor symbol deep truths to guide our lives. Were Joseph and the Magi – Zoroastrians whose teachings were among the feeder streams of formal ancient Gnosticism – simply in a state of heightened consciousness, and so dreamed things giving them clear guidance concerning the issues of their day, particularly relating to Herod.

No. They received messages from angels of the Lord. But how do we distinguish between what could just be our mind playing tricks with us and something truly from the Lord?

Here’s the thing. You’ll know. Or better put, you’d know. When God confronts you, He doesn’t leave you in doubt. “I feel like God is telling me X, Y, and Z” is not something a Christian would say, because beginning a sentence with “I feel like” doesn’t inspire confidence or certainty, pretty much at all, and God doesn’t leave things so undefined.

Remember Elijah going down to Mount Horeb, hoping to be a second Moses? Surely with all the apostasy in Israel, he and God could start over at a mountain, and God could show His back to him as he did Moses, and maybe give him a new Law. God caused a wind, an earthquake, and a fire to appear to Elijah, but He Himself was not in it. All Elijah heard was “the sound of silence,” or “absolute silence,” or as we normally hear the phrase, “a still small voice.”

Of course, we Americans love to interpret this the opposite way its intended. Elijah heard nothing, for God was not going to play by Elijah’s rules and replay the Moses story with him. We hear that and conclude, “See! God speaks in that still small voice, in the subtle moving of our spirits, in our dreams, or in those quiet moments when we open our hearts to God.”

No. The whole point of that account is that Elijah heard nothing from God. What he did hear from God was actually quite mundane: “Go, return on your way to the Wilderness of Damascus; and when you arrive, anoint Hazael as king over Syria…. etc. etc.” In other words, do your job.

God does not leave people in doubt when He wants to speak to them. For this reason we can be sure that the Holy Scriptures are just that, God’s Word. They are not the product of heightened consciousness or psychologically mature individuals. They are the product of men who had no doubt God was speaking to them, as in, “Lo, there’s a tall shining person standing before me who makes me want to bury myself lest I die.”