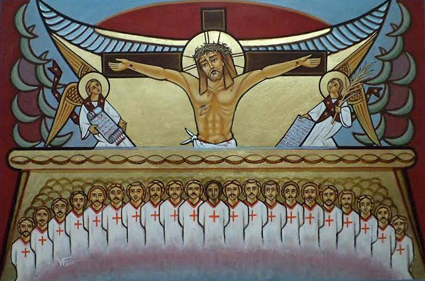 I feel like Jesus never really answered the question.

So, the disciples see Him. Then there’s a “little while” when He’s dead. Then they see Him again and they rejoice. Then He ascends, and they no longer see Him. Is this a time of sorrow? Then, because He went to the Father – and all that this meant, as we’ve meditated on these past two days – they see Him again, at Pentecost, mystically, or sacramentally. They see their own restored persons in Him, sacramentally. But during this period when we don’t see Jesus, we also sorrow, and the world rejoices. And then, at His second coming, we’ll see Him again and rejoice.  Where does the “little while” fit in all that?

Here’s something we can say for certain in the text. The text never says Jesus is going to be absent, only that we won’t see Him. The focus isn’t on where Jesus is, but on our perception of Him.  I think that might be one of the keys to interpretation. Also, that time of not seeing Him is the time of sorrow.

So maybe the attempt to get chronological with the “little while” is the wrong approach. Maybe Jesus isn’t speaking chronologically but in a more theological or even mystical way: when we don’t see Jesus we sorrow. Or maybe even, the reverse is true: Sorrowing is a symptom of not seeing Jesus. But again, Jesus is never absent. The problem isn’t He’s not there; the problem is we just don’t see Him. So, sorrowing is what happens when we lose sight of Jesus. And the world rejoicing is our perception when we lose sight of Jesus.

Look at the following verses in John where Jesus talks about “seeing me.”

Jesus to Nathanel: You will see greater things than these.” And He said to him, “Most assuredly, I say to you, hereafter you shall see heaven open, and the angels of God ascending and descending upon the Son of Man.”

Jesus to Nicodemus: “Most assuredly, I say to you, unless one is born again, he cannot see the kingdom of God.”

Jesus to the crowd in John 6: “And this is the will of Him who sent Me, that everyone who sees the Son and believes in Him may have everlasting life; and I will raise him up at the last day.”

Jesus to the crowd in John 6: “What then if you should see the Son of Man ascend where He was before?”

Jesus to the Jews: “Your father Abraham rejoiced to see My day, and he saw it and was glad.”

Jesus to Martha: “Did I not say to you that if you would believe you would see the glory of God?”

Jesus to the disciples: “And he who sees Me sees Him who sent Me.”

Jesus to the disciples: “A little while longer and the world will see Me no more, but you will see Me. Because I live, you will live also.”

Based on these passages, we should conclude that to “see” is to believe. However, it’s not just an imaginary friend faith, but a faith rooted in something palpably real, the sacramental life of the Lord’s Body, His Church. Another verse in John, one quoting the Old Testament, is helpful understanding what it means to see: “He has blinded their eyes and hardened their hearts, Lest they should see with their eyes, Lest they should understand with their hearts and turn, So that I should heal them.”

Here, “to see” parallels “understanding with one’s heart, turning, and being healed by Jesus.” One’s heart – the seat of faith – is filled with a vision of Christ that is palpable real. We see Christ at the right hand of the Father; we see angels descending on Him bringing us messages; we see the glory of God; we see the Father; we see the Kingdom of God. (This is all liturgy again.)

Another text helps cap things off, at least bringing us to some possible conclusion. After our Gospel for this week, Jesus says to the disciples that He indeed does speak figuratively (really?) but the time is coming when He’d speak plainly, and whatever they ask in His name, He’ll give them. And then He says, “I came forth from the Father and have come into the world. Again, I leave the world and go to the Father.”

Hearing this, the disciples declare that now they understand, and believe. But then Jesus basically says, “No, not really.” He explains that the time is coming (in about an hour) when they’d all scatter. They would not embrace the tribulation. They would flee it. They would not see. Their “little while” would begin.

And then He concludes with these words: “In the world you will have tribulation; but be of good cheer, I have overcome the world.”

When is the “little while” resolved? When we “see Jesus.” When is this? When we’re born again; when we understand and have faith; when we see Jesus where He was before, with all authority in heaven and on earth; when we see the glory of the Lord; when we have good cheer in the midst of tribulation even as we see the one who overcame the world.

I like this interpretation because it fits the book of Revelation, which is all a “vision” (seeing Jesus) demonstrating how Jesus is ultimately in control of all things and all events, even though His disciples seem to be in the midst of suffering. Look at what is written about the suffering souls under the altar: “Then a white robe was given to each of them; and it was said to them that they should rest a little while longer, until both the number of their fellow servants and their brethren, who would be killed as they were, was completed.”

White robes while being killed; being of good cheer while in tribulation; rejoicing while the world is a place of sorrow. That seems to be the theme.

The “little while” isn’t a chronological statement. It’s a description of faith. Now here’s the punch line. John’s Gospel doesn’t use the phrase “a little while”! It just uses the word “little.” The translators add “while” in most of the uses of this phrase.

We might put it this way: “When you become little in your faith, your vision, you will see Me no longer. You will see the world rejoicing. You will have no joy. But when you see Me, understanding in your heart, turning to Me, and being healed by Me, you will rejoice in all things, even in the midst of tribulation, because I have overcome the world.”