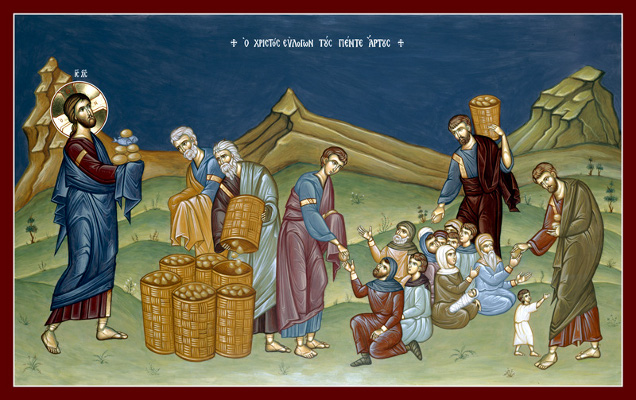 And Jesus took the loaves, and when He had given thanks He distributed them to the disciples, and the disciples to those sitting down; and likewise of the fish, as much as they wanted.

If this is a precursor to Holy Communion – Christ’s explanation of the sacramental gift in the context of real world events; He feeds us His miraculous meal in the wilderness of this world – there is a subtle parallel that needs to be explored. In both miraculous meals, the Lord works with existent, earthly materials. In both cases, He works with bread.

In the beginning, God created the world ex nihilo. He created “out of nothing.” By His Word everything that exists came into being. His Word is Christ. Adam’s sin plunged the world “out of existence,” back into the chaos, back into non-being. But it wasn’t really nothing, because the material of God’s creation is still in existence. Man goes back to dust, but dust is still something.

And it’s something God can work with in order to “redeem” the world. A helpful designation is the occasional description of the Holy Trinity by the functions of each Person: Creator, Redeemer, Sanctifier. The Father created; Christ came to redeem what the Father created; the Holy Spirit is the Sanctifier, which is sometimes helpful to understand as the “separater” or “designator.” He “separates and designates something for God’s purpose, and gives it life.”

Of course, the Holy Trinity is one God, so we don’t want to push this too far. Each Person is involved in each act of God. But let’s play it out.

God’s continued creative activity operates through the seed. He created the world, and the living beings are perpetuated through the seed. The seed does exactly as He had done in the beginning. It takes of the chaotic dust and forms it into a living being. Adam’s sin, of course, causes the creation to fall into the “bondage to corruption” and “groan and labor with birth pangs until now.”

Thus, like the manna that spoiled after a day, the products of seed such as bread will also spoil. And that symbolizes the whole creation’s spoiling.

However, there is one day it doesn’t spoil, and that is the Sabbath Day. That is a prophecy of a Sabbath Day rest which will overcome the earth’s corruption. This is the day that Jesus, our Redeemer, brings. It too begins after God declares that He’s finished with the creation: “It is finished.” This was the day Jesus lay in the tomb in rest, the day on which saints rose from the graves and walked around Jerusalem, no longer spoiled. And on Jesus’ own resurrection, He established the “new first day” for all eternity.

The bread Jesus used in His feeding of the 5,000 falls right in line with these themes. He did not create “ex nihilo.”  Just as His flesh is “of this world” (of Mary), and He saves people of this world and raises flesh born of this world, so also He uses the redemptive elements of this world.  He used existing material to multiply the bread. He Himself was the expanding Seed, the Word which “pro-created” (forward created) the bread.

But as Jesus taught when the people misinterpreted His sign, this was a “food which perishes” pointing to a “food which endures to eternal life,” that being His own flesh and blood.

And that’s operative. Jesus redeems the world in Himself. He is the firstborn of those who will not experience “spoiling” or corruption. Or put in another oft-used biblical image, He (as well as we) are the “firstfruits” of the new creation.

Clearly the bread used in communion stands as a powerful reminder of this image. The fruits of the land are lifted from the fallen order, and when the Lord adds His Word, it becomes the “food which endures to eternal life.”

Now, why is this important? Gnostic “anti-theology” – the devil’s theology – deplores this creation. The idea of using the fruits of this earth as part of the redemptive work of the Gospel would be just as foolish as the idea of God taking on human flesh or God raising human flesh from the dead.

In the feeding of the 5,000, all the elements of the Church are there. But on another level, all the elements for the reason for a Church are there. Jesus didn’t leave behind an esoteric teaching written in a book for anyone to have access to. No, He met people in the heart of the fallen beast, the wilderness, and began the redemption of all creation there. He took of the fruits of the earth. He made neighbor sit next to neighbor. He sent out ministers to deliver His gifts. And He sat at the head of it all. It’s the Church, and it’s the new creation.