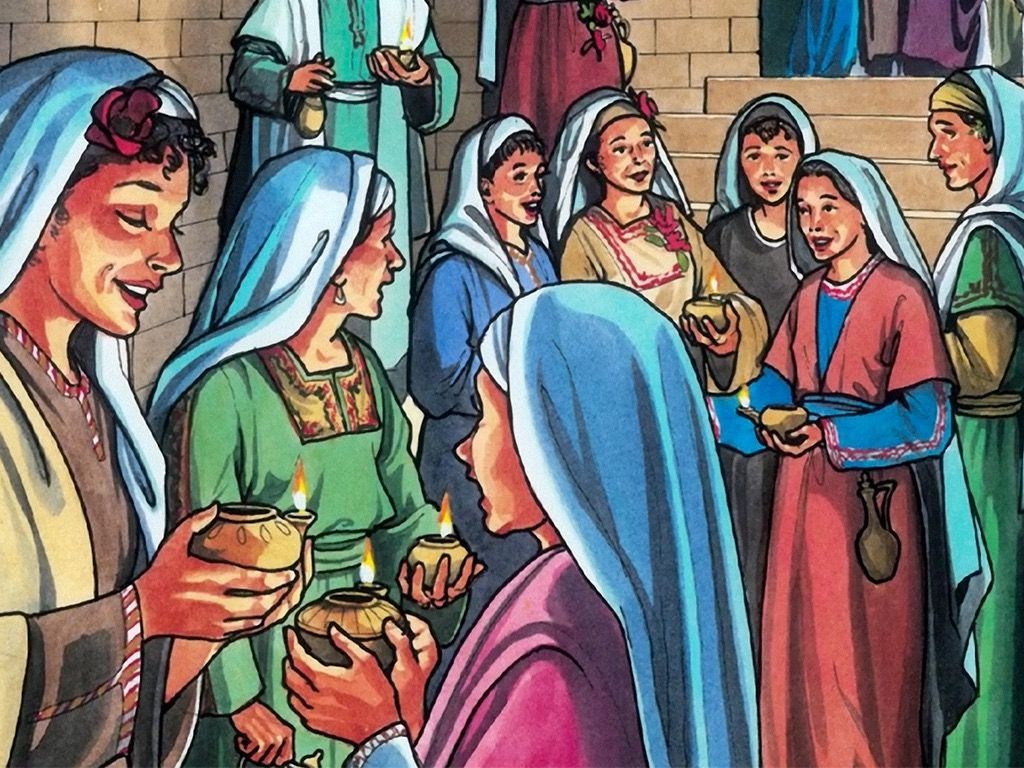 “And at midnight a cry was heard: ‘Behold, the bridegroom is coming; go out to meet him!’ …And while they went to buy, the bridegroom came, and those who were ready went in with him to the wedding; and the door was shut.

Jewish marriage occurred in three stages. First was the engagement, during which the terms of the dowry would be negotiated and set. Second was the sexual consummation. Finally was the seven day banquet. At the sexual consummation, the second stage, the groom would be escorted by the bridesmaids to the place of consummation amidst shouts, while the groomsman (the friend of the groom) would escort the bride to the same place. This place was a room built by the groom on his father’s house. (When Jesus says He goes to prepare a place for us, this is the reference.)

Our parable of the wise and foolish virgins focuses on the second and third stages. The job of the bridesmaids was to escort the groom at night with lamps toward the bride. The groom was delayed building that honeymoon suite at his father’s house, which gives us insight into why Jesus is being delayed even now. He’s preparing a place for us, for His bride!

When the midnight cry was heard, it was a time of excitement, at least for “those who were ready.” They were to enjoy seven days of joyful feasting.

This serves as a good reminder that the return of Christ is actually a joyful event. Christ’s return is when He comes back to get us. It’s when He rights all wrongs we have endured in this world. It’s when He removes all that causes sin for us. It’s when He answers our petitions, that His will be done, that His kingdom come, that our trespasses are forgiven, that we are delivered from evil and temptation. It’s when He rewards us for our faithfulness to Him, to our enduring confession of Him in the face of an adversarial world.

So often we look at the second coming as a terrifying event, something causing us to shudder. Why? St. Luke writes about the end, “Now when these things begin to happen, look up and lift up your heads, because your redemption draws near.” In other words, when the tribulations begin, and you hear the trumpet sound, don’t cower in fear like the rest of the earth, but lift up your heads! Your redemption draws near!

Very rarely in the New Testament is the return of Christ taught as a thing of fear for believers. On the contrary, it’s almost always presented as the focus of our hope. Likewise, the judgment of Christ should be seen as an exciting time. One of the most repeated expressions is that He will rule in righteousness. He will commend us for our faith. He will display deeds we weren’t aware we were doing. He will reward us.

Did we not beg our Lord throughout our days that He have mercy on us? Did we not confess our sinfulness before Him and ask His help to improve? Did we not hunger and thirst for righteousness in our heart of hearts? Did we not strive to be pure and honest toward others, to love our neighbors, and to give thanks to our Lord?

Due to a hyper-Protestantism, we sometimes fear a judgment based on “works,” because that suggests we’re saved by works. Yet, several times the Bible says just that, that we will be judged by our works, whether good or evil.

St. Paul writes, “For we must all appear before the judgment seat of Christ, that each one may receive the things done in the body, according to what he has done, whether good or bad.”

Again Jesus says in Revelation, “And behold, I am coming quickly, and My reward is with Me, to give to every one according to his work.”

The Holy Spirit in Revelation talks of Christians, how “their works follow them.”

But what works? There are works, and there are works of faith. “Works” would be basic good deeds – feeding the poor, walking old ladies across the street, etc. This makes no sense, because ultimately Jesus is taken out of the equation. Are there not good Muslims and Hindus who walk old ladies across streets and feed the poor? And are there not Christians who may not do such things?

The works the Bible speak of are obviously works of faith, like those mentioned above. It’s giving thanks to the Lord through Christ – in Trinitarian worship – even when confessing Christ is unpopular. It’s confessing oneself to be a sinner according to a biblical standard of right and wrong, when everyone else is saying such sins are your “identity” and you should embrace them. It’s hungering and thirsting for righteousness, knowing we fall short, but also knowing in Christ we have a Savior.

A life dedicated to the Lord through the Church will not go unnoticed by our Lord, for such a life is the very life Jesus analogizes by the reserves of oil in the lamps. Christians are the light of the world, on account of our faith, our worship, our testimony, our hymns, our confession. Faith is the fuel of that light. A faith that endures to the end should not be fearful that the day of Christ’s return will be anything but a joyous day on which to “lift up our heads” and prepare to hear the words, “Well done, thou good and faithful servant.”