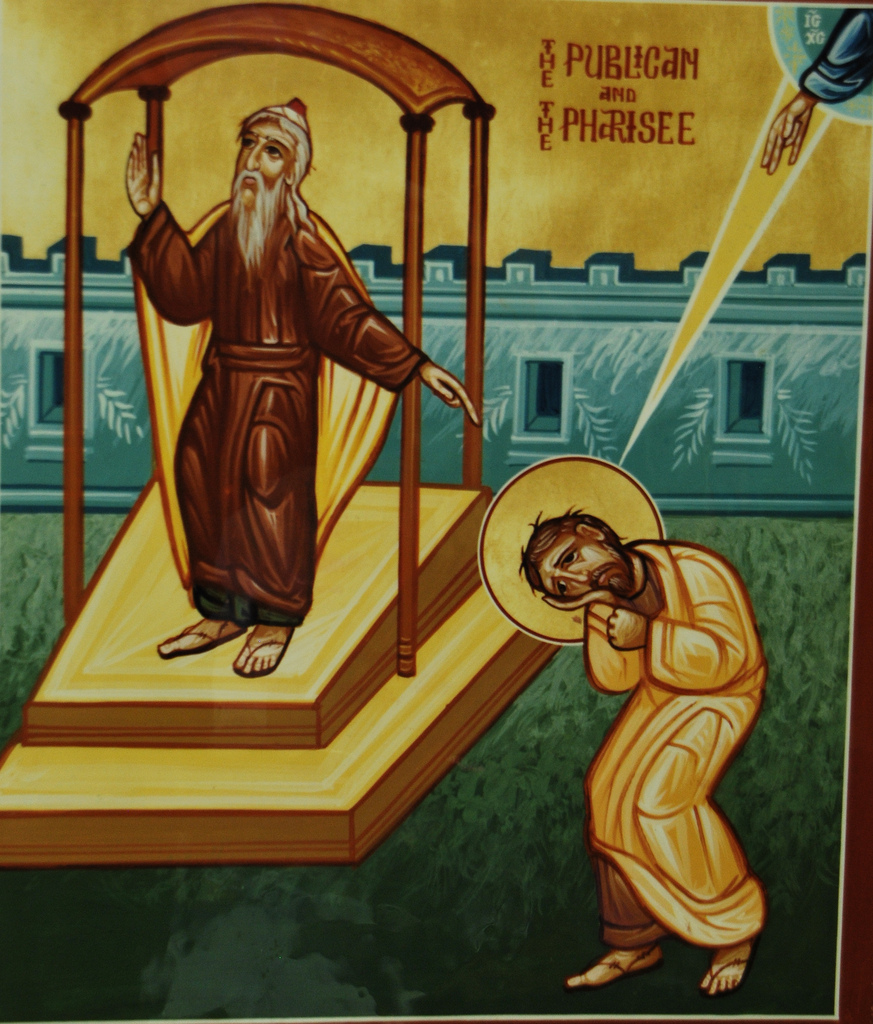 Also He spoke this parable to some who trusted in themselves that they were righteous, and despised others…

One of the bigger themes of this parable we haven’t dwelt with yet is this “despising” of others. Jesus lays down the theme in the opening words of the parable; it’s directed to those who trusted in themselves because they were righteous and despised others. Two themes: trusting in yourself because you’re righteous and despising others. And of course, half of the Pharisee’s prayer itself is about how he’s more righteous than that nasty IRS agent.

Some make this, actually, the biggest point of the parable. Generally when they do this, they’re trying to ignore the Pharisee’s doctrine of grace and justification, because it hits a bit too close to home.

First, it indicts a view of grace which yields an attitude of “I thank God how great my life is because of, well, me.” This prayer arises from a view of grace seeing God working with man. God does His bit to empower or enable us; we do our bit, after which we say, “I did it all by God’s grace.” OK. Good for you.

Second, it indicts humanism, the view that, so close are we to divine forces in our world, that we are able to identify in ourselves a genuine righteousness superceding that of others, and if only everyone gets on board my righteousness train, the world can be a better place. This, in fact, is God at work, or at least History with a capital “H” at work. Thus Hegel.

We’ve spent some time contemplating this humanistic attitude. We haven’t probed that “despising others” aspect of it. But we need to, because that’s where blood gets shed.

The Greek word for “despise” means to treat someone as nothing, to disdain them, or make light of them, or disregard them. So, we have someone who is truly righteous by human standards. He’s grateful, doesn’t steal, knows justice, is faithful to his spouse, has a good diet and gives to charity. He’s mindful, spiritual, and full of wellness, the very incarnation of every painting at any hospital built in recent years. More than that, he acknowledged that divine forces got him to that point. So, if God is empowering him to such great things, surely God must not be favoring the poor tax collector. Surely this one is someone to look down at.

Well, to begin with, the only way we can maintain that God is clearly not working with a group of people is to maintain a sort of elitism, or understanding of election. The Gnostics held this view, as do the Calvinists.

Gnosticism claimed there were “spiritual ones” who received gnosis, while on the other side of the spectrum were the earthly ones, who were basically piles of mud and clay devoid of any spirit whatsoever. Their destiny is dirt, and if this material world is just an illusion, surely they are as well, truly something to look at and treat as nothing. There’s certainly no “love your neighbor” here, that is, embracing your fellow man as a human being made in God’s image, one for whom Christ died. No, elements of this world order only serve as archetypal echoes of deeper truths, flat symbols in my personal psychodrama. The tax collector represents “the man,” an icon to be despised – “even as this tax collector.” Doesn’t he have a name, Mr. Pharisee?

And then, because God is on your side, but not on the other side, and in fact the other side is something to be despised, well, what do you do with “nothing people” at a political level? If God is truly behind history, moving it to His ends, and that God is on your side, then you represent God’s impulse in history getting the world to a better place, a place more like you, full of goodness and divinity, and a place less like those other people. What do you do with those other people? The communists and fascists – both movements “relying on the righteousness of their cause” like the Pharisee – had an answer to this question in the showers and gulag.

Calvinism is a world apart from these nefarious ends but is actually on the same branch in the family tree of philosophical movements. Millenarian movements almost always have some understanding of the “chosen elect” as God’s instruments of political change. The Puritans are a familiar example of this. Other millenarian movements in the Middle Ages demonstrate the same vibe, and several of these movements were totalitarian in nature. But for the lack of technology, they’d have had their showers and gulags as well.

Millenarian movements always have their witches to burn, their “lesser than we”’s to despise. Why? Because God is not with them as He is with us.

Jesus teaches something else. First off, against Calvinism, He teaches He is for all people, not just the elect; He died for all people. The doctrine of election isn’t a doctrine of exclusion, but of grace; that is, the purpose of the doctrine isn’t for us to ask nervously, “Am I elect?” but to say, “Hallelujah! I am elect in Christ from the foundation of the world!” Christ is the “elect one,” and those in Him are therefore elect. Christ died for all, fills all things, and saves the world, so the one not elect is the one who rejects Him. Those in Him by faith are elect, chosen from the foundation of the world. Why some reject Him while others receive Him by faith is a question we leave to God’s wisdom.

Second, He teaches love of enemies, not despising of them. Love of enemies is premised in the truth that all people are made in God’s image. To despise the poor, says a Proverb, is to despise his Maker. Given that God has made all people and redeemed all people, there is no “He’s working in me but not in thee.” There is not a single person about whom a Christian should not hope for his salvation.

Third, there is a doctrine of original sin. To presume that one’s righteousness can be the basis for despising others ignores the truth that even our righteous deeds are as filthy rags. Sure, one can be righteous by human standards and in fact be a pretty good guy, but before God something more is needed. He needs dirt to work with; He needs people who cast themselves before Him as nothing – not looking at their personal righteousness but looking at how much they fall short. Such as these the Lord builds into a new creation.

Yes, God has “chosen…the things which are despised…the things which are not.” Why? To bring to nothing the likes of the Pharisee and the mindful wellness spiritualizers who have no need for Christ or His Church. No flesh – like the Pharisee – should glory in God’s presence. No flesh should glory in his Self in the face of ultimate meaning. When facing such things – God that is, the ultimate meaning – a different attitude is called for.

As St. Paul continues, “But of Him you are in Christ Jesus, who became for us wisdom from God – and righteousness and sanctification and redemption – that, as it is written, ‘He who glories, let him glory in the LORD.’ ”