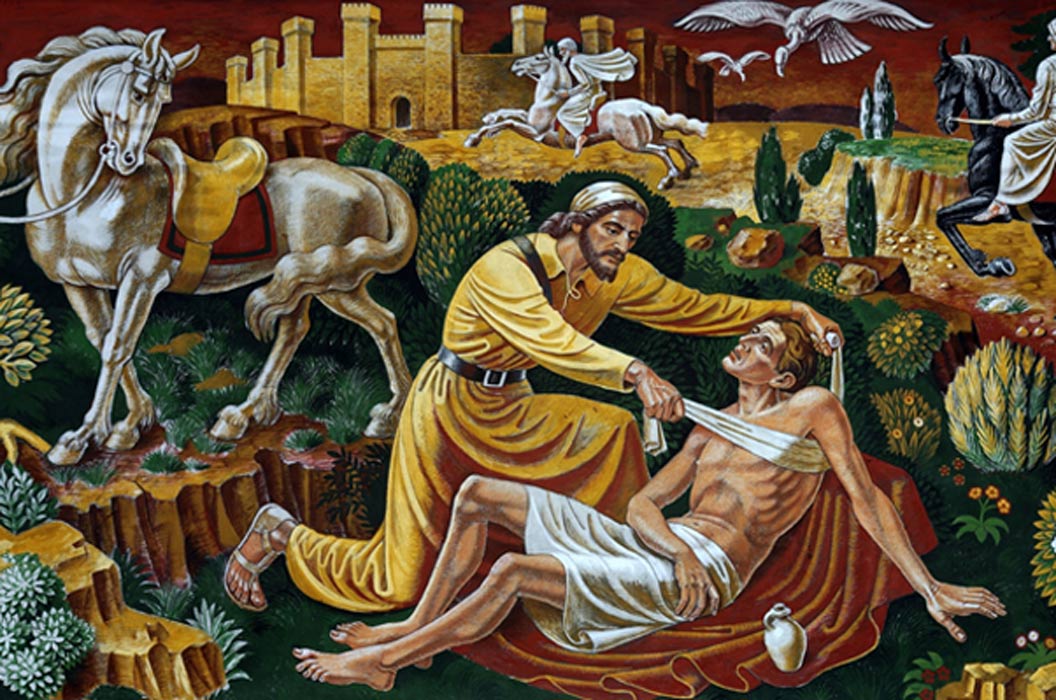 But he, wanting to justify himself, said to Jesus, “And who is my neighbor?”

This passage introduces the doctrine of justification. St. Luke was a companion of St. Paul, who has the most refined theology of justification in the Bible. It’s likely the two of them dialogued often on the subject, and it shouldn’t surprise us if Luke included teaching on justification in his Gospel.

Here are the usages of the Greek word group for “justify” in Luke:

[Jesus said,] “For I say to you, among those born of women there is not a greater prophet than John the Baptist; but he who is least in the kingdom of God is greater than he.” And when all the people heard Him, even the tax collectors justified God, having been baptized with the baptism of John

“For John the Baptist came neither eating bread nor drinking wine, and you say, ‘He has a demon.’ The Son of Man has come eating and drinking, and you say, ‘Look, a glutton and a winebibber, a friend of tax collectors and sinners!’ But wisdom is justified by all her children.”

Now the Pharisees, who were lovers of money, also heard all these things [i.e. the Parable of the Unjust Steward, Jesus’ teaching on Mammon, et. al.], and they derided Him. And He said to them, “You are those who justify yourselves before men, but God knows your hearts. For what is highly esteemed among men is an abomination in the sight of God.”

“I tell you, this man [the tax collector in the parable of the Pharisee and the Tax Collector] went down to his house justified rather than the other; for everyone who exalts himself will be humbled, and he who humbles himself will be exalted.”

The point is clear: the righteous way of God is to exalt the humble, and the humble are those who confess their sins and turn to God, seeking His righteousness. In other words, righteousness is not what we do, but what we seek God to be for us.

Twice we get an interesting use of “justify,” where “God” or “Wisdom” is justified. Usually it’s the other way around. To justify God is to declare that God is good, merciful, and just to those who repent. Yes, to the tax collector who prays, “God, be merciful to me, a sinner,” God is merciful and just, insofar as He justifies the tax collector. And the tax collector in turn declares God just.

In other words, as St. Paul teaches, it’s God’s righteousness at work in our salvation, not ours. As St. Paul writes to the Romans, “But now the righteousness of God apart from the law is revealed.” What is this righteousness? Its “being justified freely by His grace through the redemption that is in Christ Jesus.”

And that leads us to this week’s Gospel. The lawyer wanted to “justify himself.” That’s always a wrong way to begin. It’s wrong on St. Paul’s terms because all have sinned and fall short of the glory of God. It’s wrong on Jesus’ terms because it leads to people staying injured on the side of roads. Also, it leads to self glory, self glory masquerading as gratitude to God, as in the case of the Pharisee in the parable of the Pharisee and tax collector.

But let’s probe that first wrongness on Jesus’ terms, how self-justification leads to people getting hurt on the side of roads. This is to say, self-justification is ultimately loveless. Why? Because to justify self, you have to establish a standard of self-righteousness you believe you can live up to. Well, those who don’t live up to your standard by necessity fall through the cracks. We are all made in God’s image and retain the temptation that we can be gods, so we’re always mimicking Him in deficient ways. In this case, we become judges, as God will be judge. And when someone fails our standards, we sit in the judgment seat and declare them condemned, leading to whatever loveless behaviors we would have with them.

This is exactly what Jesus exposed with the lawyer in the Gospel. His standard of righteousness left people hurt, condemned. The Pharisee’s self-justification in the parable of the Pharisee and tax collector too led to him degrading the tax collector. Self-justification always leads to a certain elitism: I’m better than thee, and you’re not worthy of anything more than being injured on the side of a road.

Jesus’ standard of behavior, by contrast, is to not judge, but save. He’s the friend of sinners. He exalts the one who confesses his sins and turns to Him. And those who do not “live up to” this standard – who reject the mercy of God and the work of the Holy Spirit; who do not “go and do likewise” – will indeed be judged, not because of their behaviors, but because they rejected the proper theology of Who God is for them.

In Matthew, Jesus says by our words we will be justified. That introduces a new dynamic into today’s theme. It truly does boil down to theology and doctrine, what we say. Again, we’re all made in God’s image and reflect Who He is in fallen, deficient ways. As God created the universe by His Word, we are always creating worlds by our words. What sort of world is created by the one who justifies himself?

The opposite of self-justification is God-justification, us humbling ourselves and recognizing our “nothing” status before God – and therefore before one another – and God in turn lifting us up – and by implication all others as well, for all are creatures of God and redeemed by Him.