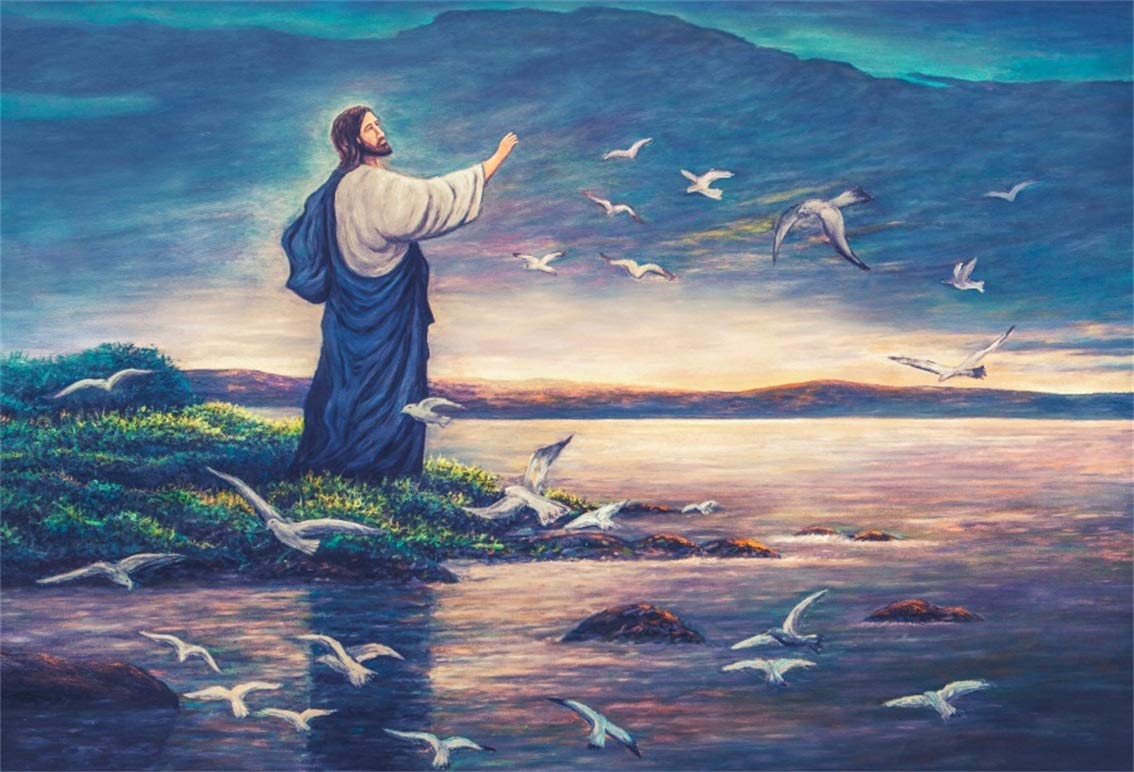 Look at the birds of the air, for they neither sow nor reap nor gather into barns; yet your heavenly Father feeds them. Are you not of more value than they? Which of you by worrying can add one cubit to his stature?

Look at the birds. That’s a command. Look at the birds. The Lord calls them as ministers of the Gospel. He’s used animals before to proclaim His Word, most notably a donkey. But all creation is incorporated into His praise, and even the stones can praise Him, Jesus teaches. If Jesus fills all things, then there is not a corner of the universe that isn’t filled with Jesus, His body, and therefore a candidate for proclamation of the Gospel.

But with the birds of the air, we get a part of the universe singled out specifically for a specifically beautiful teaching. They don’t farm, but yet they eat. The Father feeds them.

The Lord isn’t directing us to emulate the birds how they are fed. We don’t have beaks and talons. Likewise, it would be foolish to draw some sort of Rousseauian point about “going back to nature” or how man’s technology is a rape of the pure and pristine creation. The moment the Lord gave man the gift of speech, He gave the potential for technological growth, for control and manipulation of the creation for good. And indeed, it’s because of new discoveries in agricultural engineering – that combined with the decline of communism – that food production has kept up with and exceeded the growth in population, so that way fewer people are hungry today than forty years ago.

That’s how the Father feeds us. He gave the birds their beaks, talons, and wings, so that they can quickly pluck worms out of the ground and locate berries. What does He give us? Clearly not much in terms of physical attributes – we’re slower, weaker, and less vicious than predators. But we have one thing that makes us the crown of creation in terms of food production. We speak. We converse. We communicate, which requires the voiced projection of mutually communicable ideas rooted in real elements of creation. Who knows, perhaps birds have to the ability to voice, “Berries over here!” in some squawk. But only humans can communicate, “Hey, save some of those berries to plant into the ground, they’ll grow more berries you can harvest, and so we can yield greater produce. Now, let’s review what we’ve learned so far about planting so far…”

Use of speech and reason is the Father feeding us. We reflect the Father in using speech, for He Himself used speech when He said, “Let there be.” Through that word the creation came into being. That Word is Christ, the Word proceeding from His mouth which became flesh and dwelt among us, the projection of His love into Whom we are invited to commune, and communicate.

When we look at the birds, and see the gifts God gives them so that they may eat, we ought to look at the gifts God gives us so that we might eat, and thank Him as the birds praise Him. How do birds praise Him? That’s a mystery, but one wonders if it’s simply them doing as the Lord has given them. That is their glory, glory understood as that which uniquely belongs to a being. The glory of a bird is to fly – notice Jesus said “look at the birds of the air” not “the birds walking on the ground” – and as they live in their glory, they praise the Lord…perhaps.

For man, we praise the Lord with the voice, with speech. Speech directs and focuses our mind on the object of our faith, or our heart, mind, and soul, and so worship is always rooted in the words of the mouth. It’s what makes up confession, thanksgiving, and praise. So, if birds respond to what the Lord has given them by joyfully receiving these gives and doing so in their glory – flying and plucking – man does similarly by trusting in the Lord to provide for all needs of body and soul, and doing so in our glory, which is speech, which is worship.

The understanding that this teaching of Jesus begins with birds, but transcends what they do and what their glory is centers on Jesus’ word that we are of more value than they. We are substantially different than the birds. God is their Creator; God is our Father, and we are made in His image. It’s speech that separates us from them.

Which leads to an interesting conclusion. Proper use of speech – just as proper use of beaks and talons – is how the Father feeds us as He feeds the birds. Like the birds, we don’t passively sit around waiting for the Father to drop worms in our mouths. No, as we use what the Lord has given us, that is how He feeds us.

We meditated how this works with the production of agricultural knowledge, and how that keeps us in pace with the rise in population. But there’s another way this works, and that’s in that worship sense we also came across.

It’s almost as if we can speak our way out of worry, as we speak holy things, as we comfort one another, as we redirect each other’s hearts and minds to the birds and lilies. Isn’t there something to that? Isn’t there something to the role of community in alleviating anxiety and depression? And isn’t one of the rising concerns associated with anxiety and depression the lack of community and increasing isolation?

Community means communication. Communication utilizes the single thing that makes us different from the animals – our beaks and talons, so to speak. We get an echo of the divine use of speech as we alleviate anxiety simply by being with others. But in holy conversation, we get even more, heavenly conversation with brothers and sisters in the faith, in church, in bible study, in fellowship, that fills our bellies in a sublime way and takes our minds off the beachfront property we don’t have.