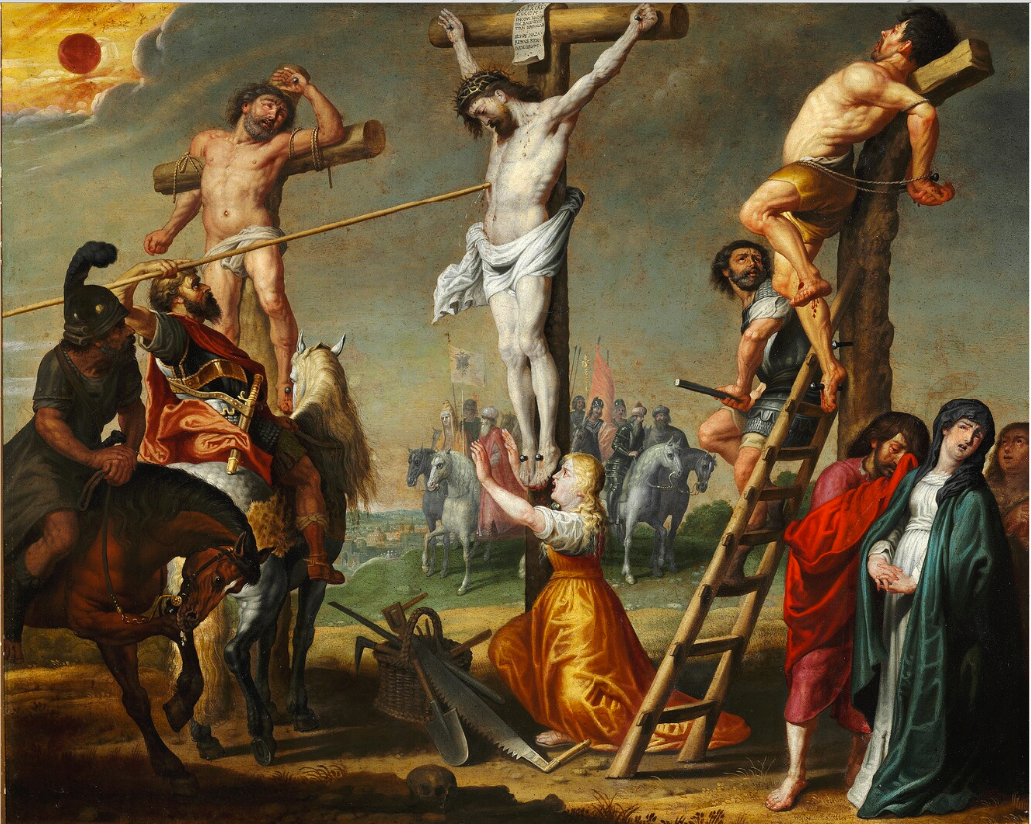 And behold, there was a certain man before Him who had dropsy. And Jesus, answering, spoke to the lawyers and Pharisees, saying, “Is it lawful to heal on the Sabbath?” But they kept silent. And He took him and healed him, and let him go.

If the Sabbath is made for man, and if the Sabbath is truly a day of rest, then it’s not really a Sabbath if you’re sick, lame, or blind. In fact, technically, God’s work is not “finished” insofar as you lack of that perfection He intended for Adam. The Sabbath day caps off a creation in which everything was “very good.” So, whatever the Sabbath Day was for the Jewish people, whatever it pointed to, it was insufficient as is, if you were wandering around with dropsy. It needed a fulfiller of it, someone to make it the cap off a truly finished product.

We have been contemplating how Jesus spoke of the Sabbath in the Gospel of John. It’s interesting. Let’s look at the passage in full: “For this reason the Jews persecuted Jesus, and sought to kill Him, because He had [healed a man] on the Sabbath. But Jesus answered them, ‘My Father has been working until now, and I have been working.’ Therefore the Jews sought all the more to kill Him, because He not only broke the Sabbath, but also said that God was His Father, making Himself equal with God.”

So, is the Father “working until now” or resting? Did He come out of retirement after Adam and Eve sinned? It’s not an awful way of speaking, but it seems to accept the premise of the “Jesus as Plan B” understanding of salvation history. What does this mean? We’ve meditated on this before. The idea is that God made the earth intending it to be perfect. When man fell, He had to come up with a “Plan B,” which was the Jesus plan, to save man. If Adam hadn’t sinned, Jesus would not have been needed.

I don’t like this, because it makes Jesus, well it makes Jesus a Plan B! Jesus is not a Plan B! If we start with that premise, we understand that in God’s wisdom, man was not fully formed until redeemed in Christ. Man’s fall and Christ’s redemption were the plan. God introduced the tree of the knowledge of good and evil – as He did – because it was in the plan that man would eat it. Not that God was the author of evil, but something about man being in His image required him going down this path.

I like this better because the alternative story is that God “let things get out of control” and had to come up with a backup plan. That simply doesn’t seem right, not for a God who is “almighty.” According to the second, what I think better, view, Satan is a tool of the Lord. His actions are completely managed by the Lord.

So if we go with this second view, the finishing of creation referenced in Genesis 2, and the subsequent rest, was really a type, or prophecy, of what happened on the cross on the sixth day followed by the seventh. On the sixth day, Friday, Jesus said, “It is finished,” speaking of the creation, and then He truly rested on the Sabbath. What happened at the creation was a mystery, a foreshadow of the cross, unveiled finally when Jesus caused the mystery to be revealed. Note also the creation of the new Adam’s bride, the Church, from Christ’s side, on the sixth day, like Eve. It’s all there.

That would give us understanding of what it means that the Father was working along with Jesus until the day of Jesus. Think of the period between the creation of Adam and Eve, and the death of Christ, as one long process of the Lord forming man in His image. The gathering of dust from the ground, combined with the mists arising from the ground and the Spirit, was just the beginning (indeed, another foreshadow). Needed net to happen was man’s predictable eating of the forbidden fruit, his fall, everything in the Old Testament, the advent of Christ, His death, resurrection, and ascension. This is all “sixth day” stuff, God still working the ground to bring about a creature made in His image.

This need not take away from the six day creation at all. The types and foreshadows are truly real. The six days are as real as the sacrificial lambs or the tabernacle. But it’s to say that the sixth day has an eschatological fulfillment, a fulfillment in Christ at the cross (administered ultimately in time at our own resurrections), which was intended from the beginning.

According to this view, the fall is not an evil in the sense of an aspect of creation that got “out of control,” but something God in His wisdom realized needed to be worked out before man could fully be said to be made in His image. Again, as I’ve brought up several times in this devotions, God is the one who introduced “and evil” in the creation. He introduced the concept – it gave a name to everything that was not of His “very good” creation. And for whatever reason, in His wisdom, He realized man needed to explore this forbidden territory before he could be fully formed.

Prior to Christ’s advent, the Sabbath too was a foreshadow of a fulfilled day, when there would be a true rest. As Hebrews tells us, “For if Joshua had given them rest, then He would not afterward have spoken of another day. There remains therefore a rest for the people of God.” Whatever rest the Sabbath testified of in the Old Testament, it wasn’t a fulfilled rest.

But yet, in a sense it was. What we’re dealing with is the “now, not yet” aspect of the mystery of faith.

But there was a “not yet” aspect to this rest as well, an administration of the eternal rest, incarnation, and death of Christ in time. This is what was “manifest in these last times for you.” Not everyone entered into that rest, as Hebrews makes clear. It remains for us in time to make that entrance.

So, the sixth day in Genesis introduces the “now” aspect of God’s rest, the completion of creation, the fullness of everything, perhaps even the fully formed man in His image. But the “not yet” aspect of creation is what Jesus in time had to fulfill. He and the Father were still working. The rest was not yet fully in place. The creation wasn’t finished until He died. And only with His resurrection do we get the fully formed “new creation,” the second Adam, the “firstborn” of creation.

Keep in mind something else, even already in Moses, within his life span, we see a development in his revelation of the Sabbath rest. At Sinai he taught the third commandment as a remembrance of the creation and the seventh day rest then. But in Deuteronomy, when he re-teaches the Ten Commandments, he taught the third commandment as a remembrance of Israel’s redemption from Egypt. It’s as if God is casting forward the meaning of the Sabbath. Yes, it causes us to look back. But yet, by connecting it to the Exodus event, it also leads us to see in it an image of our final redemption.

So, this all being said, Jesus’ question of the religious leaders, “Is it lawful to heal on the Sabbath?” could be seen as bringing all these issues to the fore. Here’s a man with dropsy. He’s unformed. He is a “deficiency of good” that is the mark of an unfinished creation. So what’s it going to be? Does the Law lay down a foreshadow of a redemption to come, as Christ manifests the Father’s final work on His creation? Or does the Law freeze in time things as they are, so that this man with dropsy just has to accept his unformed person?

Jesus knows the answer to that question, as do the religious leaders, as indicated by their silence. So Jesus gets to work. He’s making manifest the eternal rest He and His Father enjoyed, in time, to complete what He had begun when He first formed Adam from the dust. The man with dropsy knew Jesus was this manifestation; perhaps he heard Jesus’ words, “Come to me you who are weak and heavy-laden, and I will give you rest.”