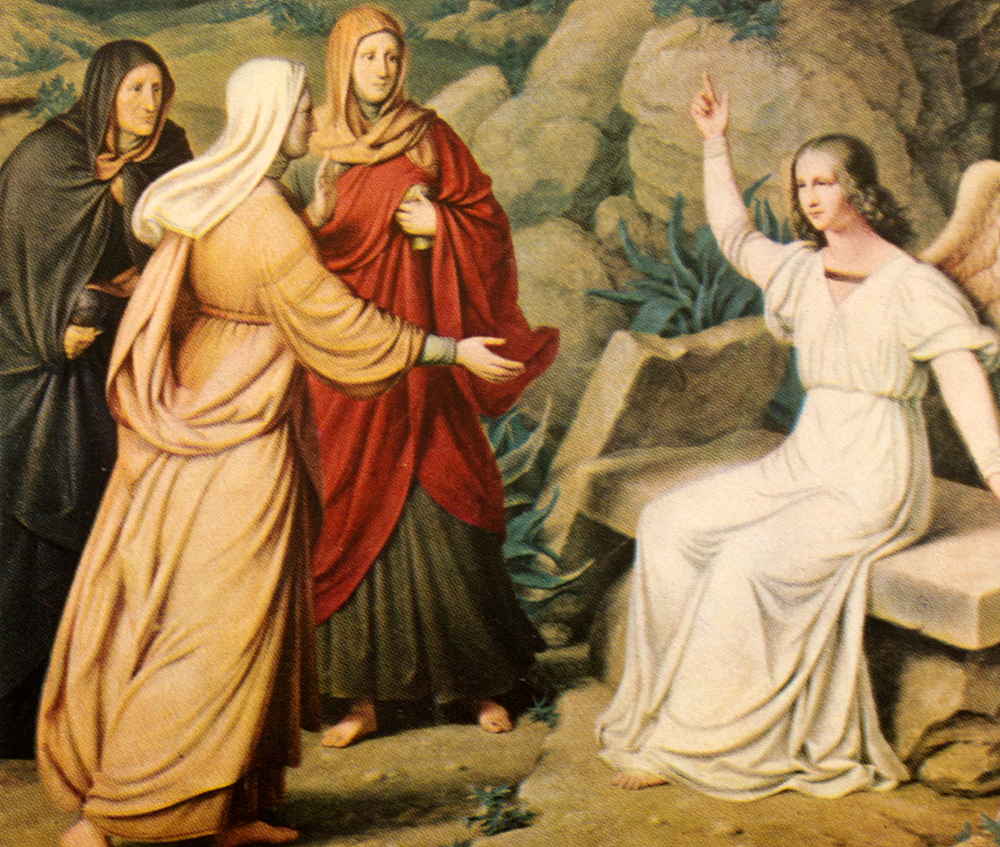 And they went out and fled from the tomb, for trembling and astonishment had seized them, and they said nothing to anyone, for they were afraid.

By one interpretation – one I don’t accept – these words are the last words of the Gospel of Mark. Everything after these words, so the theory goes, is a textual addition from a later age. On what basis is this case made? Science. OK, whatever.

At least Lutherans can’t accept this argument because it cuts out one of the important verses in our catechism establishing Holy Baptism, “He who believes and is baptized shall be saved.”

Yet, because it’s purported to be the true ending of the Gospel of Mark, suddenly it becomes an issue. Why does Mark end with fear? As it says, “They were afraid.” And then the end. If that’s truly how the Gospel of Mark ended, why does it end on such a, well, “fearful” note?

There’s several directions we can go with this. We could go with irony of fearfulness. Afraid because someone you loved rose from the dead? Huh? But this speaks to how conditioned we are in a culture of death. It’s normal to accept death. It’s fearful and anxiety-inducing to contemplate death is not the end.

How much of our own fearfulness is really ironical? What do we really need to be fear when Christ turns every defeat into victory?

How about this direction. Based on their fear, the text tells us, the women said nothing. So, all that stuff about “Jesus witnessed first to women” stuff the modern church has spun into way more than what is warranted actually tells us nothing. For the women were too afraid to say anything. Their witness was blunted by their fear. They may have been the first to witness Jesus’ resurrection, but they didn’t act on it.

We shouldn’t read more into this than need be. The disciples in the upper room were afraid also. Fear struck everyone. But it does undermine the feminist narrative of the “women’s witness.”

So, if the women said nothing, how did the disciples know to meet Jesus at Galilee? It appears that Jesus had talked about meeting the disciples at Galilee prior to His death. “But go, tell his disciples and Peter that he is going before you to Galilee. There you will see him, just as he told you.”

Perhaps here is another direction. The fear of God is the beginning of wisdom. Mark’s Gospel was likely written under St. Peter’s guidance. Well, look at what St. Peter writes about fear, “And if you call on the Father, who without partiality judges according to each one’s work, conduct yourselves throughout the time of your stay here in fear.”

Conduct yourselves throughout the time of your stay here in fear. That’s quite a philosophy of life! Conduct your behavior during your stay here on earth…in fear. Why? Because fear leads to wisdom. How? Because of reasons we now know to be absolutely true.

Ever since Frederick Nietzsche declared God’s death, fear of God has become less and less a thing. Hell is rarely preached about, and it’s an all but accepted principle that “you can’t fear people into the church.” Certainly our new contemporary worship forms engender no fear of God, presenting God more as a boyfriend, casual acquaintance, entertainer, or therapist.

Culturally also, fear of God has been replaced by ironical indifference toward the holy and all it stands for – ethics, piety, duty, and so on. And what are the results? Where do we begin? A revolution in sexual ethics leading to the breakdown of family and subsequent poverty. A pleasure-seeking culture leading to addictions and all the problems associated with that. A materialistic society addicted to mounting piles of plastic and electronic stuff, each new toy promising some sort of taste of heaven. And flowing like magma in the psychic depths of our souls is that perennial melancholy and anxiety – that existential dissatisfaction necessarily arising when one finds himself alone, adrift in cosmic silence…no God.

I’ll take fear instead of that!

Fear of God leads to wisdom, and all its concomitant blessings, like ethical order, a true sense of justice, a reason to die for what is right.

The fear at the supposed end of Mark leads to a fear in a different sense. It’s the fear induced by knowledge that life has triumphed over death. That changes everything, and change is fear-inducing. Of course, that knowledge centers on Jesus Christ, the one person in all of history who broke the “death cycle.” Sticking with this life, this Jesus, and the way of life He introduces for us, puts us in scary territory. For the disciples and women, it could have meant their death. It certainly meant for the disciples that their lives were going to be redirected away from fishing, like Peter would have gone back to doing, to proclaiming life in Christ.

There’s also a simple fear that, this Jesus is Lord and King, God of God and Light of light. That was the heart of Peter’s first sermon that led to the people being cut to the heart and begging, “What shall we do?” In other words, “How can we be saved from this Jesus and His day?”

To which Peter responded, “Repent and be baptized, every one of you; this promise is for you and for your children.” (This speaks to the longer Mark ending, which climaxes with Jesus’ words to preach the Gospel, and whoever believes and is baptized will be saved.)

And most certainly, baptism, catechesis, and living in the life of the Church, is the beginning of wisdom, for Christ is our wisdom.