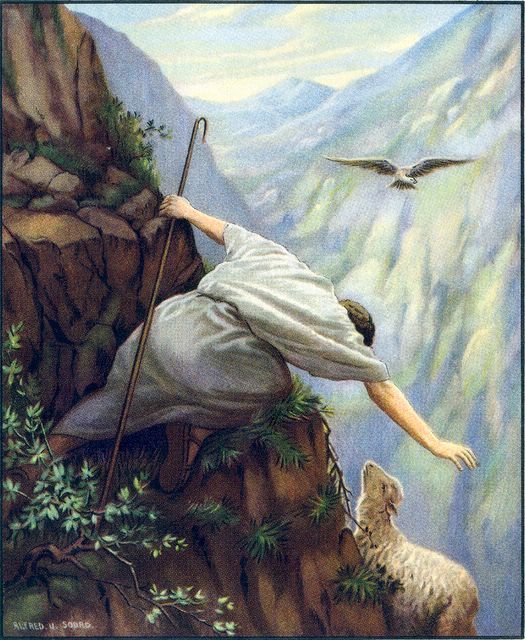 “What man of you, having a hundred sheep, if he loses one of them, does not leave the ninety-nine in the wilderness, and go after the one which is lost until he finds it?”

In the three parables of the “lost ones,” it’s interesting to probe the analogy of what got lost: the sheep, the coin, and the son. What does those analogies tell us about our fallen nature?

Each “lost one” who got lost did so due to varying degrees of self-responsibility. The coin that got lost was clearly different than the son who got lost. Coins have no consciousness. Sons do. Yet, both are described as “lost,” and that’s a passive mood. There’s something profound going on here. How conscious really are we in regards to sin? As the Psalm says, “Who can understand his errors? Cleanse me from secret faults.” Is our confession of sin similar to our confession of faith, a holding onto truths that we don’t really understand, but confess because it’s the word of God?

We think we’re confessing an obvious sin. Meanwhile, the non-understood error – that default mode of our personality, or perhaps some cultural disposition – goes unnoticed, like the smell of the house we live in, or the wetness of a fish. Who can know our faults? And we’re left to confess only that we are sinners. How we are sinners we have to leave to the Lord God. Ours is only to look to Him, and to seek to please Him. Keeping this focus on the positive may help. “I cannot know the sins I’ve done, or understand how I have transgressed, but I do have an idea of the things I should do out of love.”

Today we look at the sheep who got lost. This is one of the more popular understandings of sin, rooted in that famous verse, “All we like sheep have gone astray.” Each going his own way, and this is described as the “iniquity” laid on Jesus.

But again, notice how the Gospel for this week describes the sheep, “if he loses one of them” and “the one which is lost.” The shepherd lost it! He’s the focus! Us going our own way and going astray is the shepherd losing us so that we’re lost. Somehow He’s the focus.

Going back to the creation and fall, this can be understood. We’ve pondered several times here that when man fell into sin, it wasn’t like this came unexpectedly. Jesus saving us from sin was not Plan B. It was the plan all along. It was part of the creative process culminating in Jesus’ “It is finished.” Then the Lord was finished with His work, as Jesus said, “My Father is still working.” Yes, until He said, “It is finished.” The cross is the completion of man’s creation.

If that’s the case, then yes, the Lord is the focus. His creation becoming lost is somehow written into the plan. It’s what sheep do. There are a few pieces missing in this analysis that are hidden in mystery, obviously. For instance, does this mean we don’t bear responsibility for our own sin? Of course not. God may have written our fall into the DNA of our creation, but still, when we fell, that was all on us.

But again, the focus isn’t on us, not in the parables or in our own theology. The focus isn’t on our sin. It’s like the disciples trying to figure out whether the blind man sinned or his parents did. Jesus says, in essence, don’t focus on them. Focus on the Lord and what He’s working on in the blind man. It would be like blaming the pile of mud shaped in the form of Adam for being muddy. “Who’s to blame for him being all dirty?” And God says, “The focus isn’t on him; but that the works of God should be revealed in him.”

Our involvement in this is our repentance. And what is repentance, but turning to the Lord when He comes looking for us. It’s a way of saying, “I think I’m lost. I don’t know how I got here, but you’re the one who finds, so I’ll stick with you.” And at that point, the wandering of the sheep ends as the focus of the story. The story is now about the sheep being with the shepherd, and the ensuing party.

A Christianity obsessed about navel-gazing and that “iron couch of introspection” is like the lost sheep, after being found, going off into some corner at the party and contemplating, with furrowed brow, how he got in his predicament, and how he can do better next time. Well, he may end up just learning how to wander with greater confidence. Rather, he should be partying with the Shepherd, because the focus of the story is not the ins and outs of how he got lost, but the fact of his being found.

Focusing on the Shepherd and His party is the remedy to not wandering. Say, for instance, the party moves to a new location, and the sheep stays stationary, thinking, “I will not get lost again. I’m going to close my eyes and stay put.” Well guess what. He’s lost again, not because he did a thing, but because He failed to stick with the shepherd.