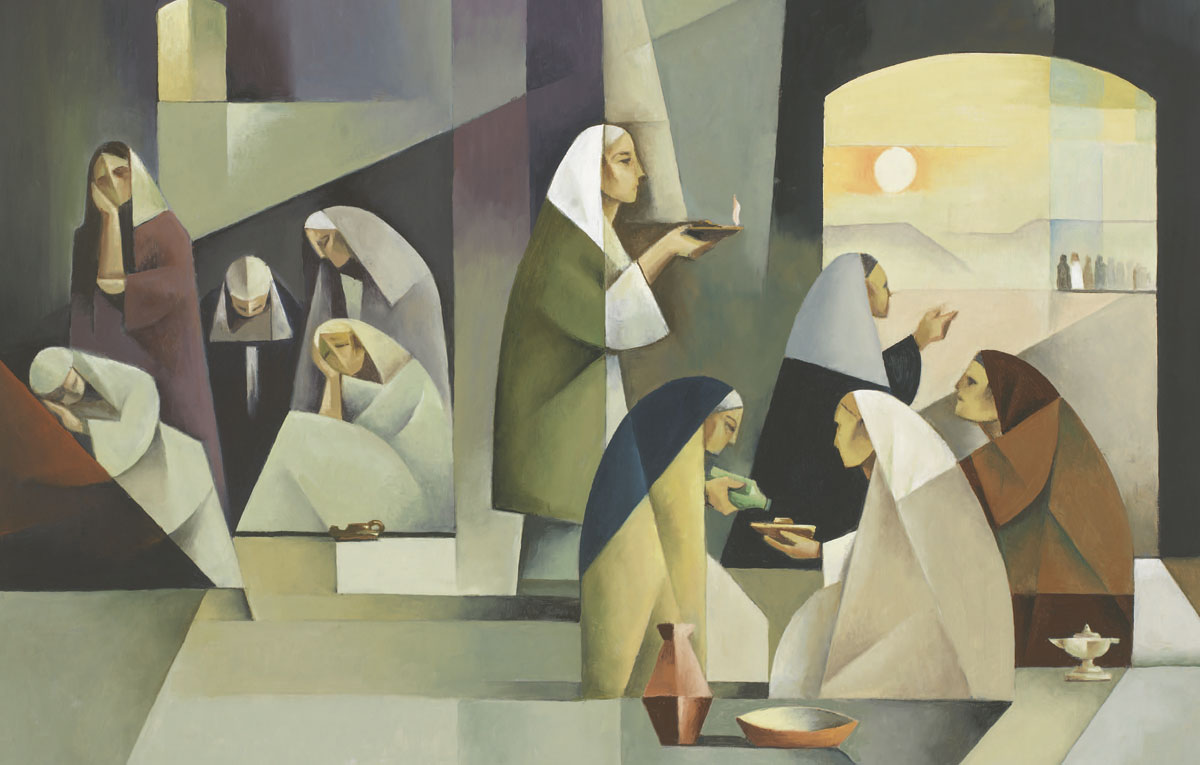 Then the kingdom of heaven shall be likened to ten virgins who took their lamps and went out to meet the bridegroom.

One of the confusing elements of this parable is that, typically in the marriage metaphor, God’s people are His bride. However, in this parable the bride is nowhere mentioned, but only the bride’s attendants, the virgins. What gives? What gives is a stark reminder that within the people of God are true Christians and hypocrites.

Simply put, the “bride of Christ” is sort of an abstraction. I say “sort of” because speaking in terms of “abstractions” can be dangerous. In the “abstraction vs. concrete” discussion bestowed on us by the Greek philosophers (as represented in the Raphael’s famous painting, “The School of Athens,” by Plato and Aristotle), the Bible by and large sides on the side of the concrete.

Some have described Plato as Gnosticism on steroids. Here’s why. As we look at reality, we see with our eyes, for instance, many individual trees. Yet, in our minds, somehow, we’re able to subsume all these variety of trees under the word “tree.” This became a conundrum for the ancients. We can only communicate due to these unchanging “ideas” out somewhere in the ether – tree, dog, man, justice, beauty, God. Yet, everything we experience with our senses in fact is changing quite a bit. As Heraclitus said, no one steps in the same river twice. Yet, we call that wet thing “river.”

This way of thinking, taken to the extreme, breeds Gnosticism. The Neoplatonists were a halfway house to Gnosticism from Platonism. Accordingly, as you work your way up from the hierarchy of being, from the sensible to the intelligible, less and less are you in the realm of the material world at all. There’s “that cat,” and then, “cat,” then “animal,” then “life,” then “being,” then “highest being,” which would be something like God.

According to Neoplatonism, the goal of life is to move from the senses to the intelligible, and ultimately to the “one,” which is basically God. As love of truth draws you there, all divisibleness and separation ceases as you settle into a glorious, harmonious oneness with ultimate truth.

With that set up, Hebrew, biblical, and Christian theology doesn’t translate to this Greek issue. It’s almost nonsensical. The Platonists act as if nouns are the only thing that matter, that the world is made up of various “beings,” and all the variety of being and their change in time is “accidental.”

But adjectives, verbs, and adverbs are just as part of our God-given language as nouns, and these parts of speech reflect upon a creation that is multifarious, growing, changing, and whatnot. To act as if God’s intent was for things to be unchanging or complete is a Greek conceit which ignores that nothing was finished at least until Jesus said, “It is finished.” And even that has to be seen in light of the economy of salvation and the strange paradox between temporal and eternal.

Theologians fall for the Platonist error all the time. For instance, ask how many sacraments there are. This is a Platonist question, because Jesus didn’t teach about “sacraments” and then delineate each example of a “sacrament.” By this methodology, you begin with a definition of “sacrament” and then proceed to determine how many there are according to that definition. But “sacrament” is an abstraction. A better methodology is simply to rejoice and confess what our Lord has given regarding His many gifts of grace, in baptism, communion, absolution, ordination, marriage, and whatnot.

The bride of Christ is the Church. Is that an abstraction? The Church can become an abstraction theologically quite easily. Perhaps it becomes so when it’s understood only in this Platonic sense, as noun only. “The Church is X.” This undermines the very verbal and adjectival nature of the church, the element of growth. No one steps into the same Church twice – yet it’s always the Church. Only in a Greek mind is this a paradox.

The church has real “flesh and blood” marks. People (ministers and believers), water, bread, and wine working together according to God’s Word make up the Church. That’s not an abstraction. That’s real stuff happening, but it’s happening at all sorts of different levels, at various levels of growth.

For instance, among those “people,” evidently, you can have wise ones or foolish ones. And this is something Jesus had been teaching for some time. There’s the parable of the wheat and tares, or the parable of the catch of many fish. Some or good, some are evil.

The problem with the foolish virgins is they gave up following because they had to run off and buy more oil. And that act of foolishness serves as the heart of Jesus’ teaching.

And here is where the payoff is of the Gospel not being Platonic.

According to the Platonic methodology, which again is always a temptation of the western mind, we’d leave this parable and ask ourselves, “What are the foolish virgins and what are the wise ones? Those are two categories of Christians. Which one am I? Probably a wise one. Who are the foolish ones? Perhaps that guy over there in that pew.”

But again, the Hebrew and Christian way does not translate well into Platonism. Remember the analogy of the seed. That’s how our Lord operates, through the seed. And His teaching is a seed; He is a seed planter. He’s planting seeds here, seeds that take dirt and turn it into life.

All of His teachings have that “growth” effect. They have a realm of “here’s where you don’t want to be” and then another of “here’s where you want to go.” Driving the whole growth event is, “my teaching will either send you one direction, or your rejection will take you out of the faith.”

Humility would put us at the “here’s where we don’t want to be” point, else why even have the Gospel read? If we’re the wise virgins, then what’s the point of the text, to make the foolish virgins feel bad about the fact that the Lord doesn’t know them?

No, each of us should have the attitude of St. Paul saying, “Not that I have already attained, or am already perfected; but I press on.” We want to be wise virgins, and not foolish.

Where is the bride, the bride of Christ, in the Gospel? It doesn’t say. But it does talk about the bride’s attendants. This corresponds nicely with those who attend the Church, or even attend Church (in the more basic sense of “attend” as in “go to”). In this parable, this consisted of five females. They went into the feast and had the banquet. The other five were elsewhere.

Now let us grow away from the foolishness of the fallen, dirtiness inherent in us, toward what our actual attendance at church suggests about the wisdom that is our faith.