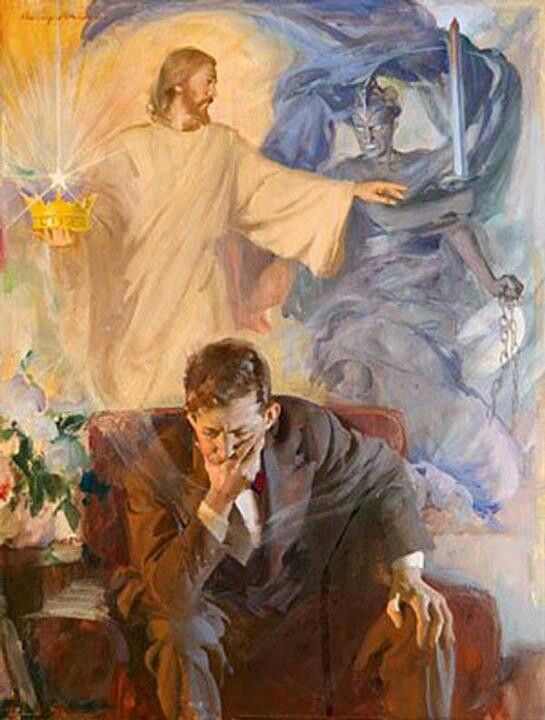 This is the third Sunday in Lent now with demons or the devil in it. The devil tempted Jesus; the Canaanite woman had a daughter possessed by a demon; and in this week’s Gospel Jesus teaches about spiritual warfare with the demonic, using the analogy of a house.

It makes sense we’d see demons and devils in this season. Lent begins in the wilderness – Jesus tempted there for 40 days – and by embracing this divine time frame as our own in the liturgical year, we are given to understand that the Christian life in this world has many wildernesses. The Church wanders in the wilderness, Revelation 12 tells us. And who of us doesn’t grasp this at a visceral level. Well, the wilderness is the dry place this week’s Gospel talks about, where demons haunt restlessly.

In the dry places you hunger and thirst for righteousness, like the Canaanite woman. You learn in the dry places that it’s not bread you hunger for – whatever crumbs there may be – but the Lord’s mercy, His righteousness, the Word that proceeds from the mouth of God. That Word we hunger for is “fiat,” the “let it be” of God’s creative work, the Word that drives demons away.

This week’s Gospel ties all these themes together.

Jesus uses the illustration of a house to describe the human person. The house is inhabited by demons at peace and rest. Yes, the way of the world in its sin and death is the default. It’s “situation normal.” We can be at rest and peace knowing people will behave like people, and the evils will go on as predicted. We become cynical with our anthem, “Let us eat, drink, and be merry, for tomorrow we shall die.” We laugh and ridicule when the likes of Jesus come around saying things like, “She’s not dead, she’s sleeping.” OK, whatever Lord.

When Jesus, the stronger man, comes and overpowers the demons in our house with His finger (lots going on there), He sets up shop. There’s a new sheriff in town. It’s jarring. He’s invaded the realms of Hades itself and shattered its bronze gates, plundering the devil of all his “goods,” the things that belong to him, his possessions, our souls. Now they belong to Jesus.

But alas, if the demons after searching a new place for rest find nothing, and come back to their original home, and do not find the stronger man there, the second state will be worse than the first.

The moral of the story is clear: don’t let Jesus leave your house. But what does this mean?

For many years I always wondered why that little account of the woman was added to the Gospel for Oculi: “And it happened, as He spoke these things, that a certain woman from the crowd raised her voice and said to Him, ‘Blessed is the womb that bore You, and the breasts which nursed You!’ But He said, ‘More than that, blessed are those who hear the word of God and keep it!’”

This seems like a complete switching of gears in the account. It’s not. It happened “as He spoke” about the demons and His overpowering of them, as He laid down the analogy of the house. It’s inserted for a reason.

Her words set Jesus up to answer what it means to not let Jesus leave your house.

As Jesus teaches about the house and its inhabitants, we come awfully close to the Neoplatonic or Gnostic understanding of the human body: we’re a spirit using a body. The house is the body; the strong man and stronger man are devils or Jesus. What exactly are we in the analogy? Are we the house? We’re definitely not the strong man or stronger man. What then are we?

When the woman comes, she wants to bless the woman body parts that received Jesus (the stronger man) and nurtured Him: the womb and breasts. She wants to see the human person as just a body. Jesus redirects her, giving a depth of understanding about the redeemed human person. He defines the blessed one not as the body that received him, Mary, but as the person who heard God’s Word and kept it.

That too is Mary, of course, who heard God’s Word from Gabriel and certain kept it, and blessed is she. And that helps us understand what’s on in the first part of the text. Yes, the human body is what devils seek to attain whatever rest they think they’ll get, the antidote to their dry places. Yes, Jesus came in the flesh to do battle over our bodies. Our bodies truly are the buried treasures He sought to resurrect.

But we are more than body parts. We are hearing persons, and those who hear, and keep the Word – the Word that proceeds from the mouth of God, the true bread we need, the Word of “fiat” that is the crumb that fills us to the full – will be guarded against the devil and his six friends.