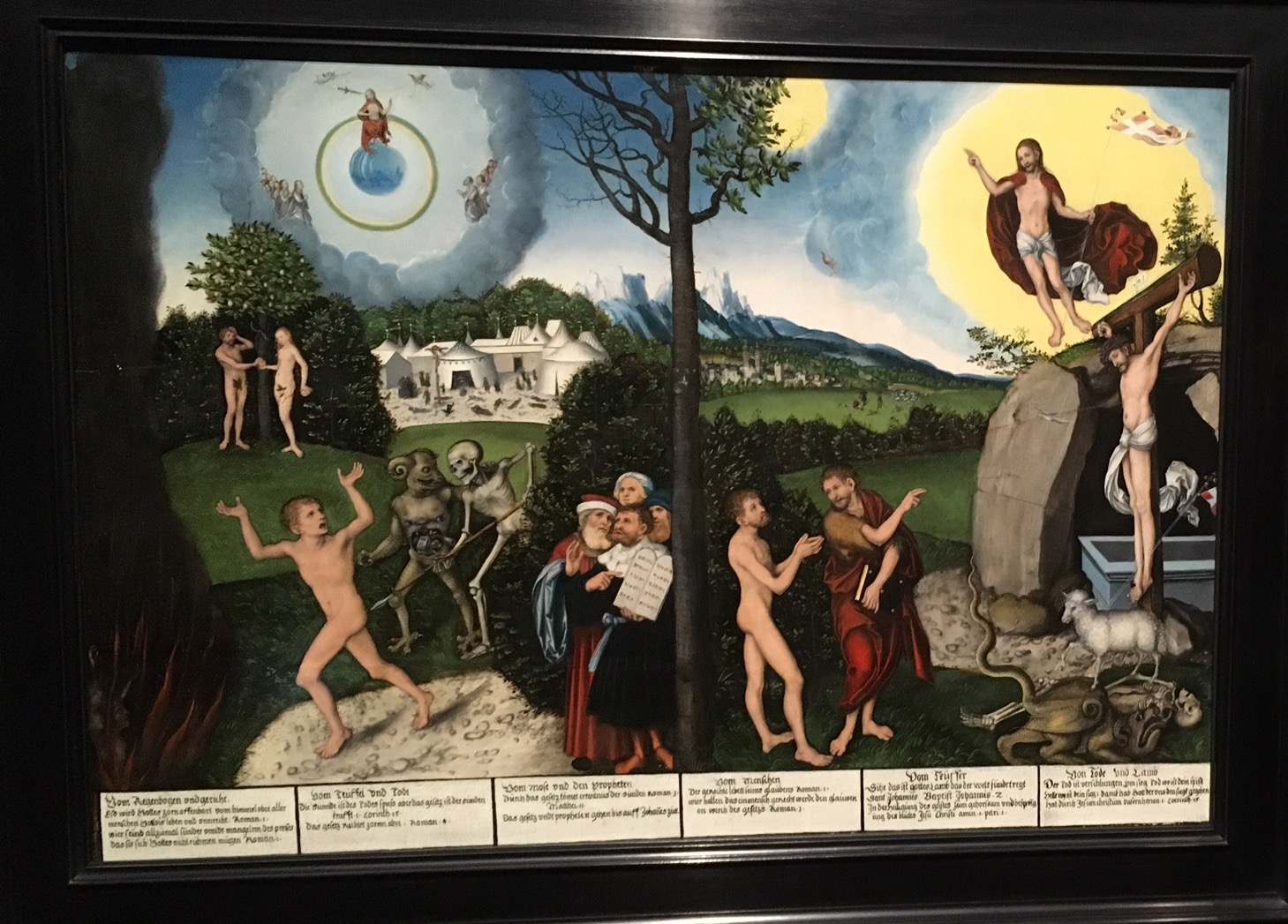 And when he comes, he will convict the world concerning sin and righteousness and judgment: concerning sin, because they do not believe in me.

In this Gospel, there are three things the Holy Spirit will “convict” the world of, things concerning sin, righteousness, and judgment. This has always confused me, not necessarily how each “conviction” is interpreted in its own right, but how these convictions relate to one another and to the whole Gospel.

Three details lead me to believe the background is Moses’ words to Israel: “Then the LORD spoke to you out of the midst of the fire. You heard the sound of words, but saw no form; there was only a voice.”

The first detail is that, just as Moses was giving His final sermon to Israel (the book of Deuteronomy), so is Jesus giving His final expansive teaching to His disciples. And as St. John wrote, “For the law was given through Moses; grace and truth came through Jesus Christ.”

The second detail is that this idea of “seeing no form” weaves throughout Jesus’ final discourse. Jesus will return to the Father, and the disciples will see Him no more. For a time, Jesus manifested the face and presence of the Father on earth, so that those who saw Him saw the Father, but this was the work of God “while it was day.” Now is the time of sorrow again, save for those who by faith witness Christ in a mystical or sacramental way. And this is through the declaring work of the Holy Spirit, which leads to the third detail.

Just as Moses said, “You heard the sound of words, but saw no form; there was only a voice,” I believe this is exactly what Jesus is teaching about the Holy Spirit. When Jesus returns to the Father, He reclaims that “no form” mode of being He had prior to becoming flesh. Of course, He remains in flesh, but now His flesh is present mystically and sacramentally.

With this background in mind (much of this is by way of review from Sunday’s meditation), the three “convictions” of the Holy Spirit make sense. As Hebrews told us, there are two mountains, Mt. Sinai and Mt. Zion, and these correspond to the two ministries. Today we focus on the first conviction, the Holy Spirit’s convicting the world of sin.

To “convict” is to “prove wrong” to someone about something. What is the Holy Spirit proving the world wrong about sin?

If Sinai assumed a certain “code” in its understanding of sin, so does Mt. Zion. It just so happens that not only Sinai, but the whole world, assumes a certain code about sin. Sin is breaking the Law, both the revealed and natural law.

The Holy Spirit proves to the world that things have changed, and thus the world is wrong about sin. If sin is that which separates us from God, what does it mean if, through out of us (Jesus), we are no longer separate from God? What would sin be in this situation? It would be whatever it is that keeps us from being in communion with Jesus. And that’s faith: “because they do not believe in me.”

This is the “unforgivable sin” of course, not any particular sin we do, for which we always have an advocate who intercedes for us, but rather a rejection of the very Spirit who delivers this “right hand” work of Jesus to us. That’s the mortal sin that cannot be forgiven.

John’s Gospel is quite powerful in its “faith alone” teaching. Of course, we all know John 3: 16, “that whosoever believes in Him shall not perish but have everlasting life.” Here are some other Johanine passages:

“Whoever believes in him is not condemned, but whoever does not believe is condemned already, because he has not believed in the name of the only Son of God.”

“Whoever believes in the Son has eternal life; whoever does not obey the Son shall not see life, but the wrath of God remains on him.”

“Truly, truly, I say to you, whoever hears my word and believes him who sent me has eternal life. He does not come into judgment, but has passed from death to life.”

“For this is the will of my Father, that everyone who looks on the Son and believes in him should have eternal life, and I will raise him up on the last day.”

“Truly, truly, I say to you, whoever believes has eternal life.”

“I am the resurrection and the life. Whoever believes in me, though he die, yet shall he live, and everyone who lives and believes in me shall never die. Do you believe this?”

There’s also a bunch of passages where Jesus says we must believe He came from the Father and is one with the Father. Believing in Christ in the Trinitarian context is what faith is, the substance of the baptismal creed, the Apostles’ Creed.

Sin is not believing this.

Does the New Testament speak of sin in the traditional, Old Testament sense? Of course it does. Indeed in the vast majority of cases it speaks of sin this way. But the distinction between the two sorts of sin is one St. John maintains in his epistles, as when he wrote, “All wrongdoing is sin, but there is sin that does not lead to death.”