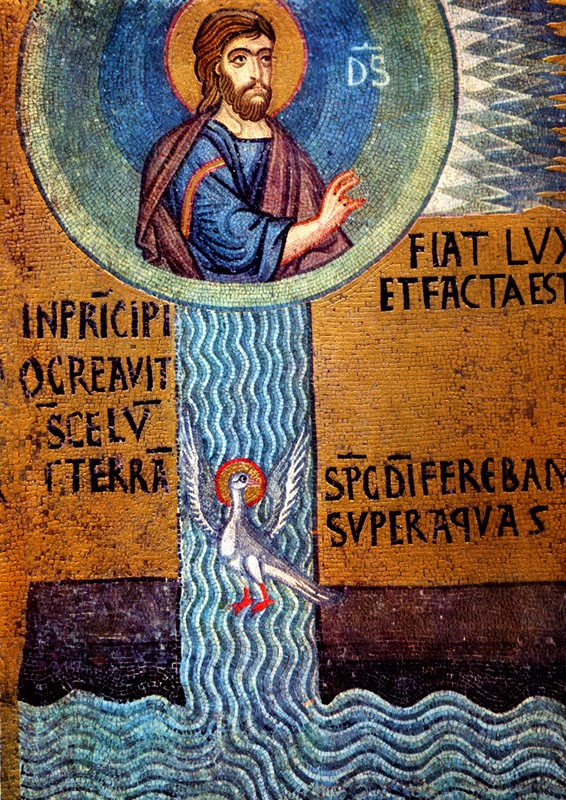 Do not marvel that I said to you, ‘You must be born again.’ The wind blows where it wishes, and you hear the sound of it, but cannot tell where it comes from and where it goes. So is everyone who is born of the Spirit.”

Everywhere Jesus teaches the Holy Spirit, He is a sound, and not just feel good, experienced babble that’s indistinguishable from what you feel like you need to do, but very clear, taught words. On Pentecost, He appeared like the sound of rushing wind. Then St. Peter taught the Gospel based on Old Testament readings, Psalms, and the Creed. We’ve had posts meditating how the Holy Spirit is a teacher.

Of course, the image of the Word of God as the Sword of the Spirit comes up several times in the New Testament. Here is a good example that sets the tone: “For the word of God is living and powerful, and sharper than any two-edged sword, piercing even to the division of soul and spirit, and of joints and marrow, and is a discerner of the thoughts and intents of the heart.”

Already in the beginning, we see the “Spirit as sword” work going on, as the Holy Spirit divided one thing from another. He’s like a knife carving through the chaos and void, separating one thing from another and giving it a word. Even the word for “Holy” in “Holy Spirit,” from the Hebrew “qodesh,” has the meaning of “to set aside” through a process of dividing.

Another interesting word is “min,” often translated as “kind” as in “each according to its kind.” Here is a comment on that word from a footnote in my book, Gnostic America:

The Hebrew mîn has a debatable meaning, but in general it denotes the intelligible crafting of distinct beings through a process of separating one thing from another. “Ludwif Koehler would have it come from the noun temûnâ ‘form’ with some such meaning as ‘to think out’ or to invent.” Skinner’s International Critical Commentary on Genesis rejects this line of reasoning and selects rather an Arabic root meaning ‘to split (the earth in plowing),’ with the resulting idea of dividing.” Theological Wordbook of the Old Testament: Volume 1, edited by R. Laird Harris, Gleason L. Archer, Jr., and Bruce K. Waltke (Chicago: Moody Press, 1980), 505.

The Holy Spirit is a divider. But the Word is a divider as well, and it is precisely in that dividing, by the Word, that we are born from above, and Christ is formed in us, as St. Paul describes it.

Think how the word has the ability to carve out of the unknown truth and clarity. Two people come in contact who have never met, and through words there literally is something created for them that previously did not exist. We could go on and on how this works at every level. Words used properly have the power to build worlds. A good coach with the power of words can create a winning attitude. Words shared by agricultural engineers has fed a world which has doubled in the last forty years, when everyone thought global hunger would rise. As we use words we reflect our divine image, even as Adam continued naming the things divided, as the Holy Spirit had done.

The words the Holy Spirit uses in the Church work similarly. As He declares to us our existential reality in Christ, who sits at God’s right hand in perfect fellowship, He creates in us a vision, a palpable cosmology, that manifests as the liturgy around the Sacrament. He separates from out of the world His Church, separates holy words from out of mundane words – words like “Holy, Holy, Holy,” the words of institution, the Kyrie, the words of the Gospel, the Our Father (of course) – and puts them on our lips, thus separating our praises out from the world and sanctifying them.

This is a cosmic architecture not unlike the ark. God taught Noah to build the ark, explaining in detail each part, and each part conformed to the laws of nature and the requirements of holding the remnant of creation, yet what a supremely heavenly meaning was going on: rescue from judgment and wrath, the new creation arising from the waters (like the first creation), salvation. The liturgy is a similar ark, a similar cosmic architecture, with similar features.

That name, those words, those Persons, lay the foundation for a life in the saving words of the liturgy. Again, it’s the Son lifting up our humanity to the Father’s right hand, restoring our own humanity, and this communicated to us by the Lord and Giver of life, the Holy Spirit. That is our salvation. That is what creates life. Adam being in fellowship with God was life. Adam rejecting that fellowship was death. Christ, the second Adam, restoring it is life again.

Now, here’s the thing about cosmic architecture created by the Word. The one who responds to it must conform his way of being to the rules of its architecture. This need not sound “legalistic,” but simple. If you build a second floor, you can walk ten feet in the air and dare not walk five feet in the air…because you can’t. Where your room is dictates how you must walk to get to it. We could go on and on about how the decor of a room calls for a certain attitude.

Have you ever had a conversation that “held” you in a certain place, in a certain mood, as if for a moment you were in a different place? That, again, is the power of the word. How much more when it’s the Holy Spirit’s word!

Well, consider how in a wholesome household, where wholesome and good words are spoken, the children grow in that wholesomeness from the beginning. That wholesomeness literally creates them, causing them to conform to the cosmic architecture created by those words in that house.

The same is true with the liturgy. Everyone baptized inherits an entire cosmology which has arisen out of the waters from the simple name, “the Father and the Son and the Holy Spirit.” And he grows into it. That cosmology “does” the faith of the baptized. This is why there’s no problem understanding the faith of infants. They are the children Jesus scooped up, but never let go! You think they’ll grow in the faith?!

But if Jesus scooping up children was a great work, the apostles do greater works than this, because Jesus went to the Father, and sent the Holy Spirit, who by His word has carved out an ark which has created a new creation, a cosmic architecture that draws all who remain in it into conformity with it.