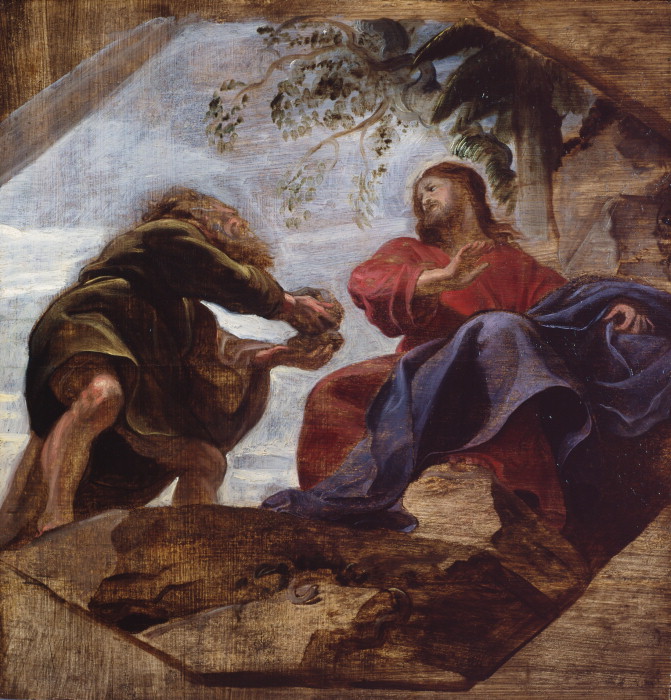 “If You are the Son of God, command that these stones become bread.”  But He answered and said, “It is written, ‘Man shall not live by bread alone, but by every word that proceeds from the mouth of God.'”

If you notice, Satan’s first temptation to Jesus is exactly his temptation to Eve. Read his words backwards: Have food to satisfy a desire, and thereby fulfill your God-like potential. Eat the fruit, and you shall be like God. Both temptations, at root, are Satan’s attempt to get man to follow his example and make a claim to divinity outside of the way God intended.

Traditional Judaism has an interesting view on Satan. They believe the world wasn’t “very good” until Satan was created. And by this they don’t mean Lucifer before he fell. They mean Satan just as he was, as he appeared on the scene in Genesis 3. Why was he created? And why was the world only good until he was created, thereby becoming “very good”?

Because, they believe, Satan was needed so man could reach his full potential. Simply coming on the scene living in the glory and goodness of his creation was good, but having to use his free will to choose the good and reject the evil is even better. It’s very good. So Satan was needed as a challenger to the creation made in God’s image.

Just about all of this would be rejected on several grounds. However, one aspect of their view is intriguing. They believe Satan’s temptation – “You shall be like God” – is in fact a proper goal for mankind. The problem was not the end result, but the pathway there. Satan tempted them to become Godlike by rejecting His Law, which for Jews is obviously the central path toward becoming like God.

Is becoming Godlike a noble quest of mankind?

Supporting a negative answer are several passages. We think of the Babel project, when mankind attempted to make a name for themselves, an event which serves as the foundation for all humanistic attempts to “be like God.” Or there’s the name of the angel Michael, which means, “Who can be like God?” It’s as if God established among his angelic testifiers the eternal statement that no one can be like God.

Supporting a positive answer is our creation in the image of God. What does that mean in terms of being Godlike? What does it mean that the one who restores us to God’s image is not just Godlike, but God Himself? What does St. Peter mean when he talks about participating in the divine nature?

It boils down to what one means by being Godlike. Satan’s temptation is for us to assume God’s creative power, to usurp what God alone has done, which is creating all things in heaven and on earth. He is the maker, the only maker. God created a world and it was good. Evil is the manifestation of what is not.  Put another way, if “is not” were a thing, that would be evil.  To know good and evil is to muster the mind toward “things” outside the creative order, and these will always have a negating effect (hence putting “things” in quotes, because whatever it is will always be a force of “no-thing-ness”).

Satan tempted Adam and Eve with the ability to create beyond the good creation – evil – and therefore to have something they might “know” in addition to the good, for you can only truly “know” things. Man’s first creation, as noted in a previous meditation, was clothing, the covering up of their physical, good bodies. What a sad moment. (Also what a sign of the Gnosticizing tendencies of many to come, to look down on the body in shame and cover it up.   God at least covered it up with flesh, foreshadowing Christ’s fleshly covering of our sin.)

Satan wanted Jesus also to be a creator according to rules he set up. The Father sent Jesus into the wilderness to fast. That was His will for Him. Satan tempted Jesus with making “no-thing” bread, bread that won’t last, bread man can’t live by. Interestingly, Jesus would one day make bread, but from other bread, not from stones. Jesus redeems the creation; He doesn’t start anew.

Jesus teaches the right way of restoring the image of God, of being Godlike in the proper way, and that is through faithfulness and obedience to God. As far as this goes, the Jews are correct. Obedience to God’s will as expressed in His Law is the proper way to be Godlike.

Where Jews go wrong is not recognizing God’s goodness is something “lived in,” not chosen. Adam gained nothing by “not choosing” the evil of eating the fruit. He had it all, and the “very good” of the sixth day seals that truth.

Jesus doesn’t restore our ability to choose good and reject evil, by Himself showing how it’s done and giving us grace to do the same, so He can step out of the way as we save ourselves by His grace.  Someone would have to prove the Gospels teach this at some point. What the Gospels do teach is that Jesus recreates all things, that He saves us from our sins, that we are born again to a new state of existence, that the kingdom of God is at hand, that Eden is restored. In other words, the Gospels teach that there is a new goodness to “live in” that has nothing to do with human choosing or rejecting.  The goal of Christian faith is living in fellowship with Christ, that we “live in” Him, our restored Eden.

This gets to a bigger point about why Jesus entered the wilderness alone. Did He go to show us how it’s done? So we could be like Him, Godlike? Or did He go to undo Adam’s original sin, defeat the one who defeated him, and become the source of a new, redeemed race of children born of God, not of Adam, of children who live in the joys of the new life.

We would say the latter, not the former.